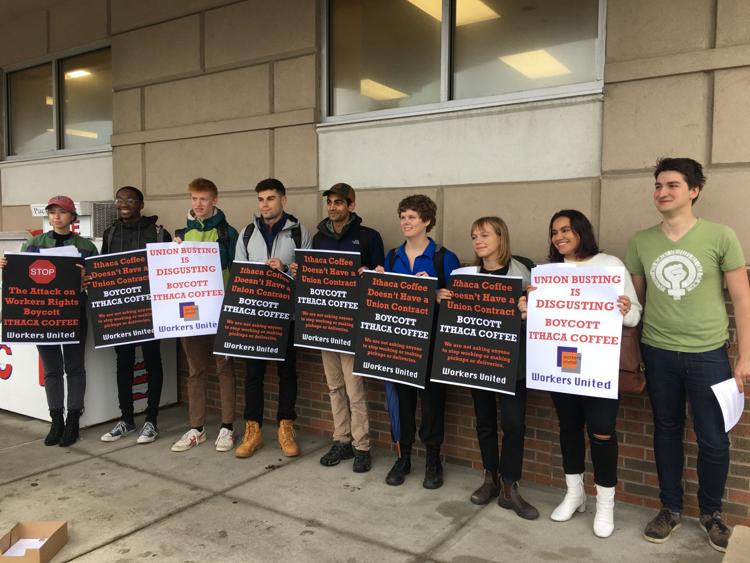 (ITHACA, NEW YORK) - After several years of attempting to Unionize, Ithaca Coffee Company (ICC) Workers' efforts took a big step forward with a National Labor Relations Board (NLRB) decision earlier this year, which has now inspired those Workers to call on area residents to boycott the popular local coffee brewery.

Three Employees from Ithaca Coffee Company won back pay and one had disciplinary actions removed from their files according to the Buffalo Office of the NLRB.  After this, ICC was supposed to post a sign where all Workers can see somewhere in both of their stores.

Several students from Cornell University and members of the Ithaca community came together under the leadership of William Westlake, a former Ithaca Coffee Company Employee, who worked at the location at Gateway Commons to boycott ICC’s Triphammer location.

Westlake said he had attempted some organizing during his time at the company, but that it was discouraged: “That narrative was maintained by anyone at my location who had ever interacted with the owners and I was able to corroborate that myself once I got to meet the owners.  Throughout my time, I talked to other Workers about starting an Organizing Committee.  It was Brenden Lukosavich who was our Head Organizer to start to rally Workers but, I think, it was not even the first week of the campaign where a manager told a Worker they would close down the Gateway (Commons) location if they voted to Unionize.”

Following that, Westlake said, it was difficult to get anyone to show public support for the Union. Up until that point, Westlake claimed 80% of workers were Pro-Union, which dropped drastically afterwards.

Westlake was joined by Yana Kalmyka, an undergraduate student with the Cornell University School of Industrial and Labor Relations (ILR School) who came to support Westlake and the Workers at Ithaca Coffee Company earlier in October to start their boycott.

“We have a lot of community volunteers, students, and Ithaca folks,” Kalmyka said. “This is our kick-off event, which is why we have a lot of people here, but going forward we are going to have two to four people out here every day during all the busy shifts asking people not to go in. One of the main reasons we are out here is because we believe that a large percent of their revenue comes from this location.”

Other students from the ILR School Westlake and Kalmyka are looking to gain more community support and would like to expand the boycott to the Gateway Commons location.

The stated goals of the boycott are: To have Julie Crowley, the owner of Ithaca Coffee Company, apologize to the Workers and to the Ithaca community; Offer a former Employee who lost his job with ICC his job back; and To sign onto and honor the Union’s - Workers United- Non-Interference Principles for Union Organizing Campaigns so Workers can organize without interference or intimidation from the company.

ICC still does not have a Union Contract and, according to Westlake, the environment of fear lives on among Workers.  That’s what he and others are asking the Ithaca Community to help stand up for the Workers.  Westlake also called on Crowley, who was unable to be reached for comment, to change her stance.

“The community of Ithaca has a choice, we all do as consumers, to make Julie Crowley see that she is wrong,” Westlake said. “We will stand up for Workers in the fight against any company that does not value the rights of its Employees and we will make certain that changes are made in the behavior of employers in Ithaca.”

To Directly Access This Labor News Story, Go To: www.ithaca.com/news/ithaca/students-and-former-workers-urge-boycott-of-ithaca-coffee-company/article_28c3cc74-f6e6-11e9-810d-4b46205b0a0c.html?fbclid=IwAR3Vzo2eMEBVoSu5ZQc3yCUCK9uVdZpRg3Vtf8E87wRSM9cQdcHTZdcM0EM