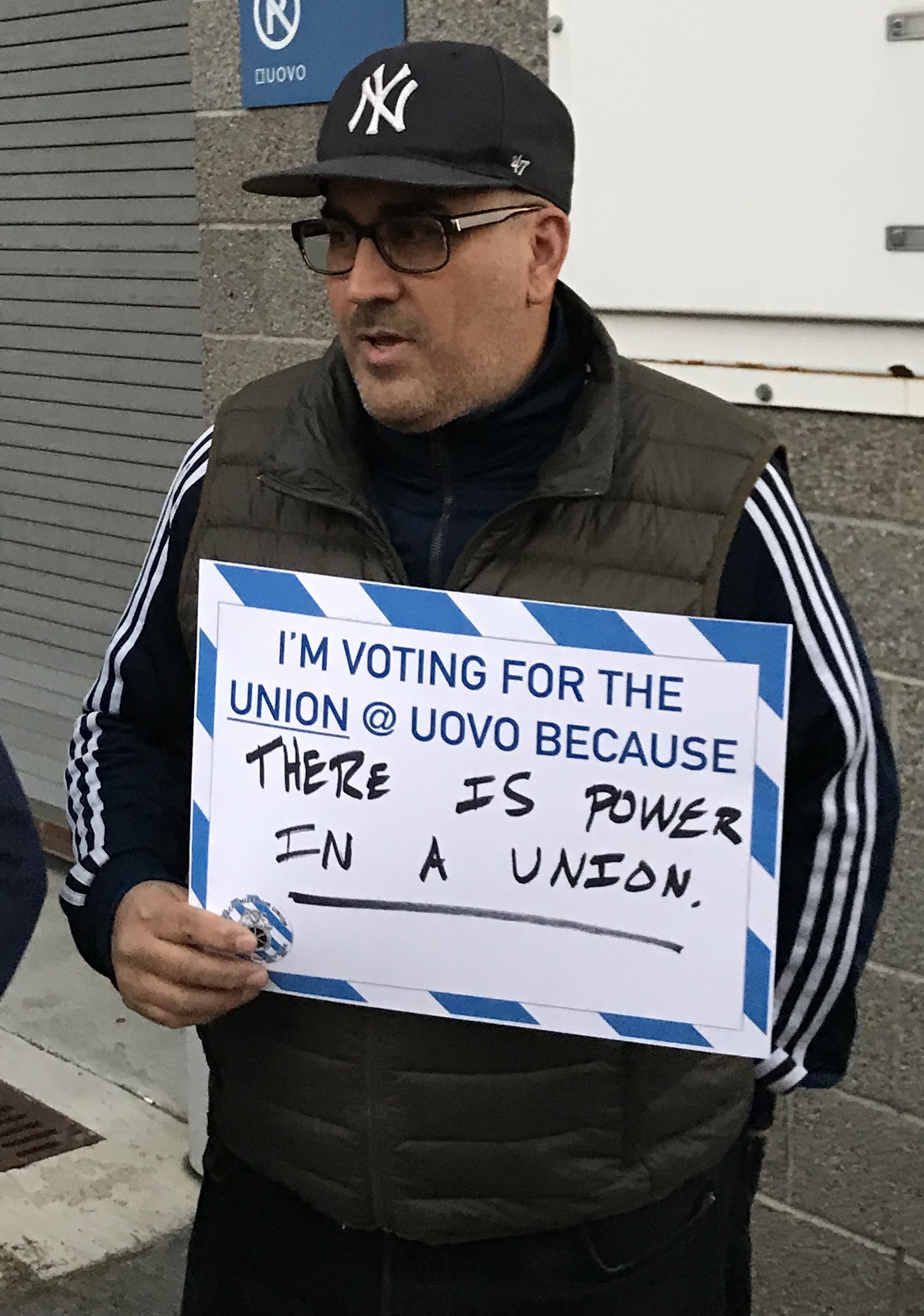 (NEW YORK CITY) - Workers employed at the Uovo Art-Moving and Storage Company joined about 50 supporters for a rally outside its Long Island City warehouse Wednesday (October 23rd), two days before they will vote on whether to join Teamsters Local 814.

“We’re ‘helping pioneer this for others,’” Ricardo Santiago of the Bronx said. “We’re ‘trying to fight for the future people of this industry.’”

About 40 of the 80 Workers at the Long Island City facility will vote on Friday (October 25th), said Art Handler Daniel Powers, along with a few more at its two warehouses in Rockland.

“The Workers ‘reached out to us.’  ‘They have a lot of issues,’” Julian Tysh of Teamsters Local 814 told LaborPress before the rally - adding the Workers were “joining the wave” of Art-Worker Union Organizing, such as at the Guggenheim and New museums.

The Teamsters have had contracts with the Sotheby’s and Christie’s art-auction houses For Decades, says Tysh.  However, the art-moving and storage industry is largely Non-Union, says Benjamin, a long-time Art Handler active in an on-line advocacy and advice group called the Art Handlers Association of New York, who did not want to give his last name.

“I hope that this is the ‘splash that sends ripples through the industry,’” he said. “If they win this, ‘it will embolden a lot of Art Handlers to realize they can do this.’”

The Union Supporters want better pay and health benefits, for the company to match their contributions to 401(k) plans, and respect in general.

Some of the crates they lift weigh 800 pounds or more, but “when my back hurts, ‘I don’t go for a CAT scan, I can’t afford it,’” he says. “This industry ‘is built on our backs and you only have so many lifts.’”

The Union Campaign “picked up steam very quickly,” he says, and management responded with captive-audience meetings and disinformation, such as taking Workers out for drinks and telling them falsely that their Co-Workers were going to vote against the Union.

“They ‘accused me of being a cult leader,’” he says.

They also charged the Teamsters were paying him to be a plant, which he calls “an insult to my principles as a father.”

“To ‘put my job on the line to get benefits for my family and be accused of taking money from the Union,’” he said.

There are about 30 to 40 art-moving companies in New York, according to Benjamin, but bigger companies like Uovo are squeezing them out by taking away their clients, says Powers.

“Art ‘is no longer art.’  ‘It’s a stock,’” he says. “We ‘hold the most valuable things per pound in the world for the richest people in the world.’”

The job gets in your blood, Powers told the crowd - “We went to art school for this. We studied painting for this.  ‘We’re touching history,’” but when he started out, the man who was his mentor told him: “This ‘will never be a career.’”

He and others want art handling recognized as a skilled trade: “Every job is ‘custom.’  ‘We’re expected to be absolute perfectionists.’”

To Continue Reading This Labor News Story, Go To: http://laborpress.org/art-handlers-defy-union-busting-on-eve-of-vote/