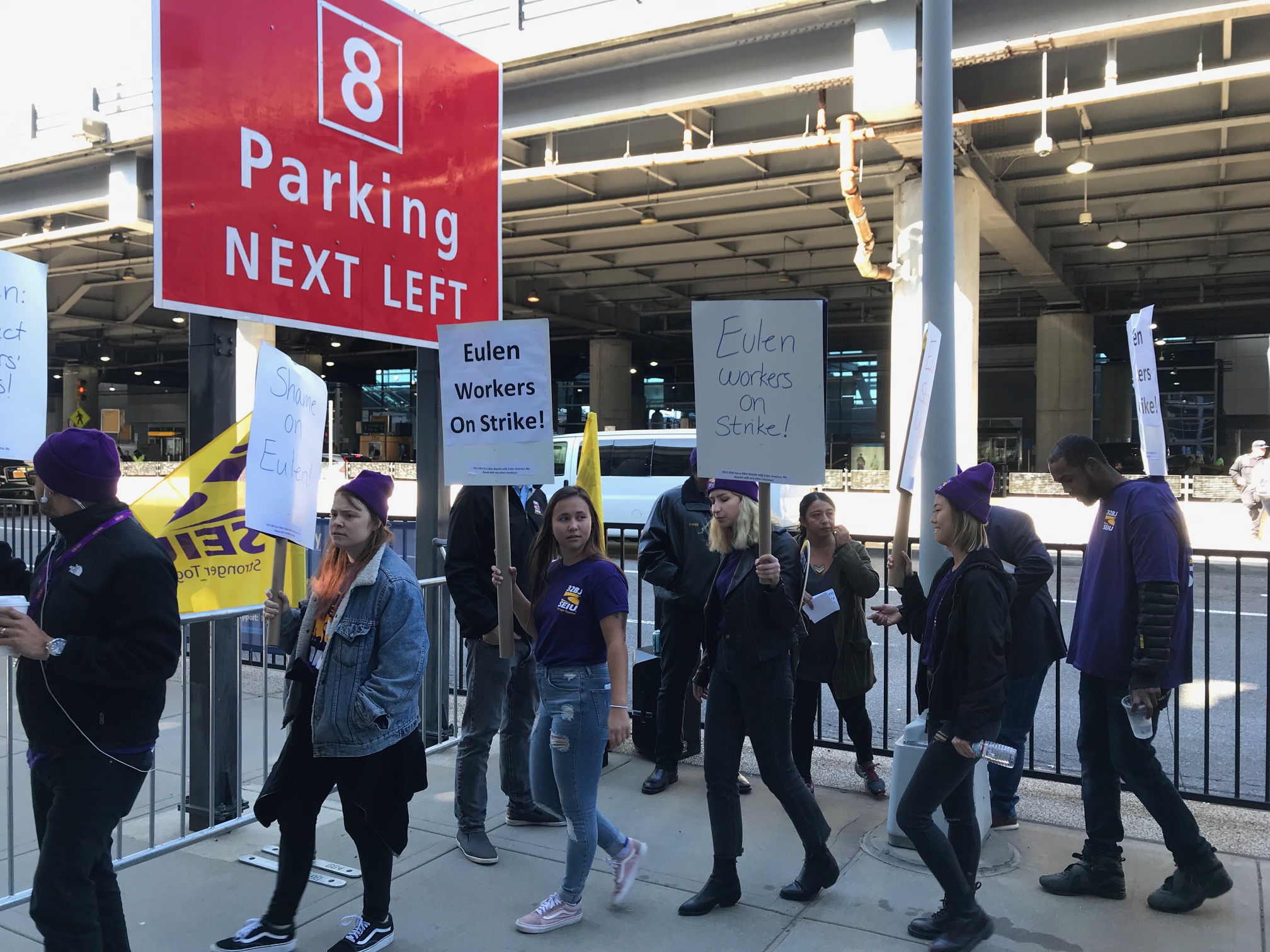 (NEW YORK CITY) - Workers for Airline Contractor Eulen at John F. Kennedy International Airport went out on Strike for 24 hours on Monday (October 21st), demanding the company stop interfering with their efforts to organize a Union.

“This ‘really is about dignity,’” 32BJ Service Employees International Union (SEIU) President Kyle Bragg told about 100 people picketing outside the Airport’s Terminal 8. “It’s about a company ‘that needs to learn to treat Workers with respect.’”

“The ‘truth is, we need a Union,’” said Worker Alicia Brown.

“The Workers ‘have been fighting to organize for a long time,’” Bragg told LaborPress before the rally. “They ‘want to have a voice on the job and not be intimidated every day.’  Eulen ‘needs to get right with these Workers.’”

Union Officials say Eulen America, which employs about 300 Workers at Terminal 8, has intimidated Workers by holding captive-audience meetings to tell them the Union only wants their money, supervisors going up to groups of Workers and asking if they’re talking Union, and cutting the hours of Union Supporters.

“They ‘start making threats about our shift assignments,’” Brown said.

32BJ has been organizing Workers for contractors at the New York area’s three airports for about seven years.  Those companies do services the airlines have outsourced - cleaning cabins, security, pushing passengers in wheelchairs, “Bag Runners” who load and unload luggage, and Passenger Service Representatives who control the crowds going through Customs and help people navigate the new automated passport-checking kiosks.

Union Officials say that most of the contractors - including Airway, Aviation Safeguard, and PrimeFlight, have signed contracts with 32BJ SEIU, which has won a $15.60 an hour Minimum Wage that’s scheduled to go up to $19 in 2023.

32BJ SEIU now claims 10,000 Members at JFK, LaGuardia, and Newark Airports, but Eulen - the Spain-based company that handles services at Terminal 8, the base of American Airlines and smaller international carriers including Cathay Pacific and Qantas - is one of the holdouts.

The Union postponed a similar Strike planned for Newark.

It held a similar one-day walkout in June at JFK and airports in Miami, Washington, and Fort Lauderdale, Florida.

To Continue Reading This Labor News Story, Go To: http://laborpress.org/jfk-airport-workers-answer-union-busting-bosses-with-24-hour-strike/