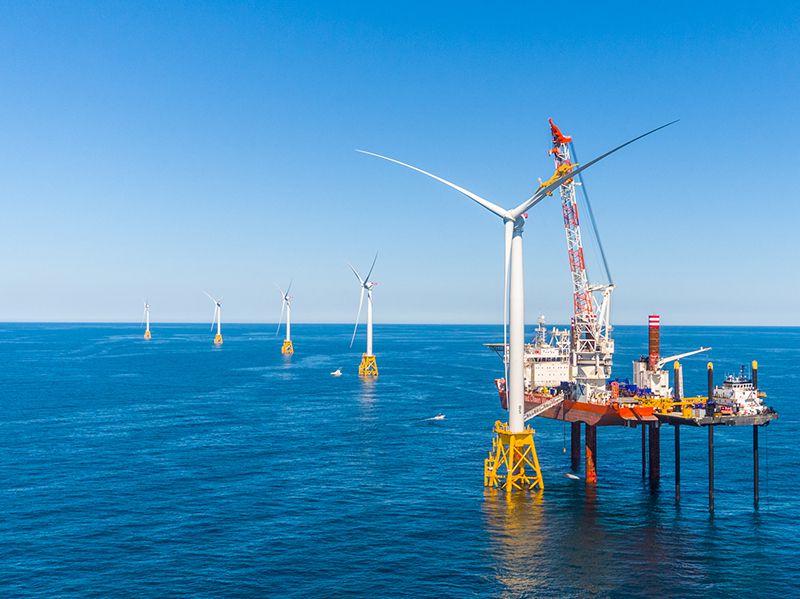 (BUFFALO, NEW YORK) – The Buffalo Building & Construction Trades Council is supporting a Los Angeles-based company’s Offshore Wind Energy Initiative and plans to meet with the organization’s representatives here in Buffalo in December as the project looks to gain momentum, a representative of the Building Trades told WNYLaborToday.com this week.

In September, Diamond Generating Corporation (DGC) took the first step towards building up to three wind farms out on Lake Erie by submitting an Interconnection Request with the New York Independent System Operator, according to Public Radio Station WBFO-FM.  The company's request shows two wind farms connecting to substations in Erie County and one wind farm connecting to a substation in Dunkirk, all by December of 2023.  DGC - which is based in Los Angeles and is a wholly-owned subsidiary of the Mitsubishi Corporation, is a developer, owner and operator of privately-owned power projects across the United States.

The project would create a great number of “good-paying jobs in the industries of the future,” Ironworkers Local 6 Business Manager Tom Halligan - who also serves as Secretary-Treasurer of the 18-Member Union Buffalo Building Trades Council, told WNYLaborToday.com this week.  He also told Your On-Line Labor Newspaper that Diamond Generating is interested in building a facility on the grounds of the old Bethlehem Steel site in Lackawanna, where the massive windmill foundations would be built for its projects not only here on Lake Erie, but for several others out on the Great Lakes.

Halligan spoke publicly for the Building Trades in favor of the initiative during a mid-September hearing that was held in the Erie County Legislature.  The initiative is being opposed by two Republicans, including Legislator Lynn Dixon, who is currently running for Erie County Executive.  Halligan, along with representatives from the Sierra Club’s Niagara Chapter and concerned residents rallied together on the steps of Erie County Hall that day in support of the local offshore wind energy investment, citing wind energy’s significant job-generating potential and the urgent need to move toward a sustainable, environmentally-sound power grid.

During the rally, Halligan said: “Our (Members) want ‘good-paying’ jobs in the ‘industries of the future - and we deserve every opportunity to be a part of the future of offshore wind in Western New York.’  Our communities ‘must not be left behind’ as New York and the rest of the country ‘look toward alternative’ job-creating energy sources.  We ‘expect’ our Legislators ‘to be forward-thinking and welcoming of common-sense’ economic development opportunities.  Western New York ‘has lost enough and we can’t afford to stand in the way of job growth.’”

This week, Halligan told WNYLaborToday.com: “We’ve set up a meeting with Diamond for December and they’re willing to sign a Project Labor Agreement (PLA should the project move forward).  ‘I don’t know if it will happen, but it would put a lot of Ironworkers, Carpenters, Cement Masons, Operating Engineers and other Members of the Trades to work in very good-paying jobs.’  (The Republican Legislators) ‘don’t understand’ the lake bottom (won’t be negatively impacted) since the on-shore built foundations ‘will be taken out onto the lake and sunk, not built out on the lake where anything will be disturbed.’  The ‘majority (of the work) will take place on land and not negatively impact the health of the lake or the fish.’  (Diamond) will have to get through the RFP process and ‘we’ll help them push for it.’”

New York Governor Andrew Cuomo has said he would like the State to be 70% powered by renewable energy by 2030 and 100% by 2050.  It is said that Downstate New York will host more than $30 billion in wind energy projects when all is said and done.

Those in the know also say offshore wind creates more jobs than other sources of renewable energy and produces more power per installed watt than both onshore wind and solar - and can deliver power right into cities.

And this is not anything new - there are offshore wind farms around the world that have been built in sensitive environments and demonstrated to be compatible with the environment – including birds, fish and fishing.

For example, in Block Island, Rhode Island, the fishing community and offshore wind are thriving together.  The Block Island Wind Farm (pictured above) is the first commercial offshore wind farm in the United States, located 3.8 miles out into the Atlantic Ocean.  Not built by Diamond Generating Corporation, construction of the five-turbine, 30 MW project began in 2015 and in late Summer of 2016 five turbines were erected.  Operations were launched in December 2016 and it is now expected to produce more than 125,000 megawatt hours of electricity annually.  Power is transmitted from the turbines to the electric grid along a 21-mile transmission submarine power cable that’s buried under the ocean floor, making landfall north of Scarborough Beach in Narragansett, Rhode Island.  The windmill structures themselves stand 600 feet high and are said to be able to withstand a Category 3 storm.

Meanwhile, Western New York has an opportunity to lead this new industry and become the main offshore wind energy infrastructure provider for all of the Great Lakes - rather than losing out to Ohio, Illinois and/or Wisconsin, Building Trades Officials said.

International Union of Operating Engineers (IUOE) Business Manager Gary Swain, who was also in attendance at that Erie County Legislative hearing in September to show his Union’s support for the project, is no stranger to heralding the benefits of wind-power.  His Union has built a strong track record of supporting and working on several massive projects across Western New York, including the Town of Arkwright in the Southern Tier where his Union’s Membership totaled more than 120,000 man hours on a windmill farm there.

“(The Republican) resolution ‘isn’t going anywhere because this project isn’t going to harm gas bladders in fish - stuff (opponents are saying) you just can’t make up,’” Swain half-jokingly told WNYLaborToday.com in regards to the stated negatives of the project.

“This project ‘will be checked out before it gets going – if it makes sense and (wins out) over those who say, never, never, never.’  These windmills ‘would be so far out on the lake that you wouldn’t be able to see them with your eyes.’  It would have to get approval from the PSC (Public Service Commission first and) since the Governor wants the State to be (70%) renewable by 2030, I think the State ‘would look favorably on this,’” he said.

“These (offshore wind projects) ‘are already happening and they are successful.’  In fact, these foundations that are produced on land and dropped into the lake’ become a man-made reef of sorts,’” Swain continued, “and, this company ‘is going to build them anyway, so why not here in Lackawanna, instead of Cleveland or Chicago?’”

“And there are communities ‘that are further taking advantage of that and running excursions out to the windmills.’  This could also turn into a ‘sight-seeing venture,’ something like ‘Wind and Wine’ cruises.  ‘By the way, if that happens, I want (10%) of it because it was my idea,’” he said with a laugh.

For More On This Labor News Story, Read WBFO’s Report: Will Future Sunsets Over Lake Erie Include Windmills? At https://news.wbfo.org/post/will-future-sunsets-over-lake-erie-include-windmills And Energy Officials Looking To Ease Concerns Over Long Island’s Offshore Wind Farm At https://newyork.cbslocal.com/2019/09/19/concerns-long-island-wind-farm/