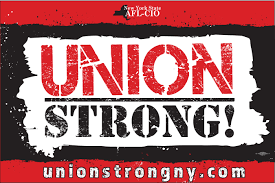 (CHICAGO, ILLINOIS) - To Special Education Teacher Maggie Sermont, the rationale for a Strike against Chicago's Public Schools boils down to a simple "enough! - and more Workers are joining the call by showing a willingness to Strike, reawakening the Nation's Organized Labor Movement after decades of mostly small gains.

And, at the same time, Unions are making a powerful comeback with Americans approving of Labor Unions by 64% - only two percentage points shy of the highest mark recorded in the past 50 years and 16 points above the low in 2009, Gallup reported two months ago.

Last year, there were 20 major work stoppages across several industries, the highest total since 2007.

The Strikes and walkouts included a lot of school districts, but also big corporate names like AT&T and Marriott.

The number of workers involved, 485,000, was the highest since 1986, the Bureau of Labor Statistics (BLS) reports.

The Chicago Teachers' walkout comes as more than 46,000 General Motors Workers are about to vote on a Tentative Agreement won after a five-week Strike that scored gains for the United Auto Workers (UAW) Union.

As for the Chicago Teachers' action, the walkout followed a string of similar strikes around the country, including ones in Conservative States like Kentucky and West Virginia that might not, on their face, seem sympathetic to Labor actions by Public Workers.

Earlier this year, 34,000 Los Angeles Educators struck for six days.  Their resulting contract not only raised their pay by 6%, but lowered class sizes while creating additional School Nurse and Librarian positions.

In fact, Teachers across the country have nabbed win after win.

Now, Chicago Teachers are striking, hoping that their timing is right.

"It is really a unique opportunity right now in American Politics of Unionism - and especially the teaching profession," said Sermont, who teaches at Chalmers Elementary and who is also a Union Delegate. "We have seen instances of Teachers' Unions standing up saying: 'This is enough!'"

To those following Unions' newfound power, the explanations seem obvious.

Wages for Workers are up - median wages for full-time and salaried workers have risen 3.6% to $919 a week over the past year, but it's not enough for many, especially given the yawning income gap with the Super Rich.

"The average person is observing the good economic times, not sharing in it.  In fact, they may be losing ground," said Harley Shaiken, a University of California-Berkeley Professor who specializes in work, technology, and global production issues.

"It doesn't do any good to watch the stock market climb," he said, if you can't participate in it.

Amid the lowest unemployment rate since 1969 and the overall economic boom, Workers are feeling emboldened in ways they never did a decade ago.

To Continue Reading This Labor News Report, Go To: www.usatoday.com/story/news/education/2019/10/18/gm-strike-uaw-contract-vote-cps-chicago-public-schools-teachers/4013610002/