As The Industry Faces A Workforce Shortage, More And More Women Are Embracing The Construction Trades 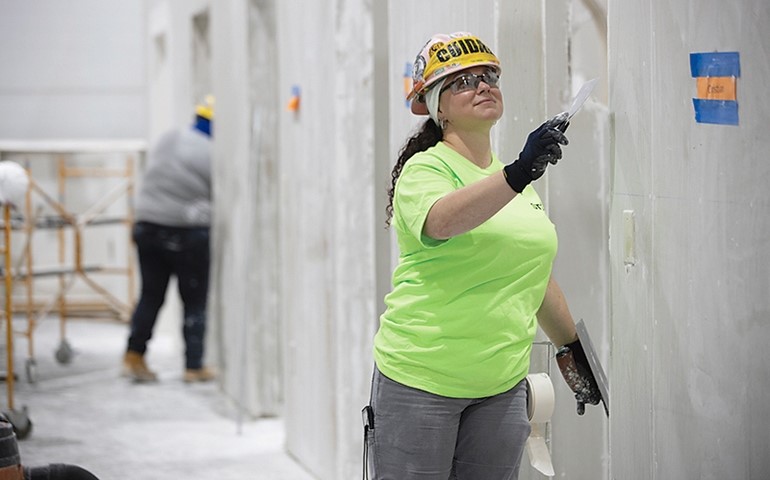 (HARTFORD, CONNECTICUT) - Somer Hicks has held various jobs over the years, including being a Bartender and Painter, but her latest in the Construction Industry has been the most satisfying, she said.

“I love it,’’ said Hicks, 38, of the Terryville section of Plymouth, who started a year ago as a Laborer - assisting Carpenters, Electricians and other Building Tradespeople - after completing State of Connecticut-funded Pre-Apprenticeship Training.  “I love that it’s like going to the gym.  When you see what you’ve completed, you can look back and say, ‘I did that.’ ”

Hicks’ entry into the male-dominated Construction Industry is more common these days.

As the sector faces an aging workforce and tight labor market, big contracting firms, as well as smaller subcontractors and their suppliers, are being forced to diversify their hiring.

As a result, in recent years, private design, engineering and contracting firms, construction trade groups, Labor Unions and non-profit workforce-development agencies have mounted a full-court press to identify and train more Women for the industry.

In particular, employers and others involved in recruiting, training and supporting Women in the sector point to a steady migration of females into posts that don’t involve field work, such as design and engineering, project management, accounting and marketing.

Yet, some observers say Women, as well as Ethnic Minorities, remain underrepresented in Connecticut and U.S. Building Trades amid greater legal and social emphasis on fairness in hiring and training.

“I believe that as Women become more aware of the opportunities that are there, the percentages are going to increase,’’ said Yolanda Rivera, who has spent the past 20 years filling Connecticut’s Trades Pipeline as Director of Construction Sector Initiatives at Capital Workforce Partners (CWP) in Hartford.

Rhode Island’s Gilbane Building Company, a builder of public and private projects in Connecticut and the Northeast, says more Women than ever are among its Staff - and not just in the field.

John Hawley, Vice President in Gilbane’s Glastonbury office, said his company has extended its job recruiting to female college students in majors such as mechanical and electrical engineering, as well as accounting and marketing.

Women, says Amy R. Blackwood, the Executive Director of the John J. Driscoll United Labor Agency (ULA) and Community Engagement Director for the Connecticut AFL-CIO, are a deep talent pool that could benefit the Building Trades Sector: “You’ve got a retiring workforce and an untapped workforce that’s never had an opportunity.”

In 2016, the Connecticut State Building Trades, in concert with the ULA, launched Building Pathways CT to put Women through seven weeks of Pre-Apprenticeship Training to qualify them to work in construction.

To Continue Reading This Labor News Story, Go To: www.hartfordbusiness.com/article/as-industry-faces-workforce-shortage-more-women-embracing-construction-trades?fbclid=IwAR1OqUESpSe-DIQamhblVcNtgfyJzwx9WipgNpjnksLXN_O4wggNS1FH0Mo