âHard Lessonsâ From The Hard Rock Hotel Collapse: In An Industry With âLax Enforcementâ Of Safety Standards And Where The Companies âIn Charge Are Let Off The Hook, Worker Deaths Are All Too Commonâ 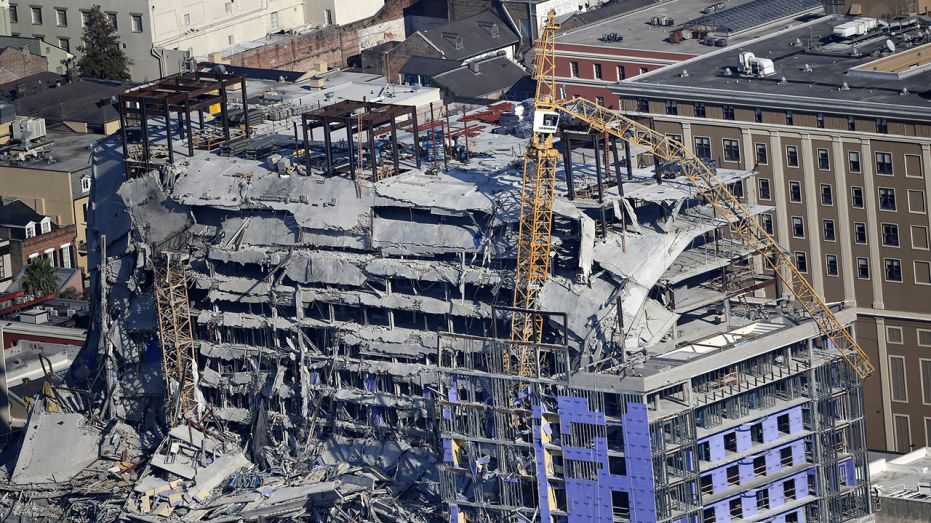 (NEW ORLEANS, LOUISIANA) - People on the streets of New Orleans fled for their lives on Saturday (October 12th) as part of the Hard Rock hotel collapsed onto the street.

As pedestrians fled, nearly 100 Workers were trapped or injured in the structure.

Thirty would end up going to the hospital, three were found dead and it took hours before all of the Workers were accounted for.

According to sources from the City, as late as Monday night, pieces were still falling off the building.

As dust and debris covered multiple city blocks on the edge of the famed French Quarter, questions have begun to arise about how a building that was under construction could just collapse.

According to Hard Rock, Citadel Builders LLC was contracted by Kailas Companies, owner of the project, to build the Hard Rock Hotel New Orleans.

According to Andy O’Brien, the Secretary Treasurer of the Southeast Louisiana Building and Construction Trades Council, the International Brotherhood of Electricians (IBEW) and the U.A. Plumbers & Steamfitters Union have been holding informational pickets outside of the hotel for weeks in an effort to inform residents of the danger of the project.

“Citadel is not a Union Contractor,” O’Brien said. “Whenever they show up, we aren’t far behind.”

In other words, when Citadel sets up shop on a construction project, the Construction Unions are quick to picket and protest.

Some of the issues that the Unions were concerned about included the use of non-licensed Workers, hiring Undocumented Workers and misclassifying Employees on the project as Independent Contractors.

This isn’t Citadel’s first brush with the law.

In August, the contractor pleaded no contest and agreed to pay a fine for using unlicensed contractors on their jobs.

If the Union's intelligence is correct, it would appear Citadel hasn’t learned from their fine and continued to use non-licensed Workers.

“Our collective hearts go out to the Workers and their families impacted by this horrible tragedy,” O’Brien said. “While our organization represents sixteen Unionized Construction Locals, we have always felt it is our higher responsibility to look out for, protect and represent in any way possible all Workers involved in construction in Southeast Louisiana."

As the contractor and the city rushed to shore up the project, Union Ironworkers rushed in to help.

According to Troy Bates, nine highly-trained Ironworkers brought in a 500-ton hydraulic crane from Baton Rouge – but instead of letting the trained Union Workers do their job and use the crane to stabilize the building the contractor said he didn’t want any assistance from the Union Workers, and kicked them off the job and let a non-skilled Employee operate the crane.

"I could not be prouder of these Ironworkers," said Marvin Ragsdale of Ironworkers Local 58. "They put their expertise to work for the safety and benefit of their community."

With three Workers dead and dozens injured the U.S. Occupational Safety and Health Administration (OSHA) will be opening an investigation into what happened.

To Continue Reading This Labor News Report, Go To: https://ucommblog.com/section/safety/non-union-contractor-caused-hard-rock-hotel-collapse?fbclid=IwAR2LqNtluEP7qc0iat09fOwxjaC95sVQ74Lnn6F3-lNPZlRgC8nJWDL0cB0

And from The Prospect: Hard Lessons From The Hard Rock Hotel Collapse - In An Industry With ‘Lax Enforcement’ Of Safety Standards And Where The Companies ‘In Charge Are Let Off The Hook, Worker Deaths Are All Too Common’

Developers are generally off the hook legally if Workers on construction sites are mistreated or harmed.  Accordingly, they often have little or insufficient incentive to monitor the subcontractors’ compliance with Employment Laws and Safety Regulations on job sites, which can lead to serious abuses.

General contractors are often similarly lax, although they can be found liable under OSHA regulations and sometimes other laws.

An ongoing case in Minnesota involves a Labor Broker accused of human trafficking.  The developer denied knowledge of the allegations and blamed a subcontractor for hiring that broker. Yet, a few weeks ago, the alleged trafficker was again working for the same developer, who - in a Groundhog Day move - again denied knowledge and blamed a subcontractor.

Construction is one of the most dangerous industries, accounting for more than 20% of the 4,674 Private-Sector Worker Fatalities in 2017.

Wage Theft and Payroll Fraud are also common in construction, from California to Colorado to Washington, D.C.  Companies commit Payroll Fraud by paying workers off the books.  This saves them money and results in underpayments for Workers, unfair competition for law-abiding businesses, and underfunding of public treasuries and Worker Compensation Funds.

Fissured construction sites can also pose a more direct threat to the public.  Dangerous worksites can create serious risk for pedestrians, drivers, and people nearby, as a harrowing 32-second video of the Hard Rock collapse demonstrates.

For one thing, our Labor Laws need a serious overhaul to make it easier to join Unions. Unionized Workers are more likely to voice concerns about safety conditions, and Unionized Construction Sites have fewer safety violations.

A spate of recent polls shows public support for Unions at record highs, and a recent MIT survey found that over half of Workers would join a Union if given the chance.

The current Private-Sector Unionization rate is 6.4%.

We also need stronger enforcement of Safety Standards.  This requires beefing up OSHA, which under the Trump Administration has cut Safety Inspectors to the lowest level in the agency’s history.

It also requires state and local prosecutors to prosecute employer crimes against Workers.

In a positive development on this front, nine attorney general offices now have dedicated Workers’ Rights Bureaus and a growing number of district attorneys have begun to prosecute crimes against Workers.

We also need to make sure that companies can’t contract away their obligation to ensure lawful workplaces.

Our laws too often let developers and general contractors off the hook.

OSHA creates liability for construction general contractors, but not developers.

Most other workplace laws don’t even go that far.

The companies at the top of the chain have ultimate control of a construction project and the power to ensure compliance: They hire the subcontractors; Write the contracts; and Hold the purse strings - yet they’re usually uninvolved in actively ensuring compliance on their jobsites.

But in recent years, promising legislation has passed at the state and local level in a few jurisdictions. Washington, D.C.’s Wage Theft Statute, for example, creates joint and several liability for the general contractor and subcontractor.

To Read This Labor News Report In Its Entirety, Go To: https://prospect.org/labor/hard-lessons-from-the-hard-rock-hotel-collapse-new-orleans/?fbclid=IwAR1UMzLklh4HeZbvrStqfbTi2lZjFdkV_vullR_AZmqWuqRd1vr1507ccr0

And For More Read: New Orleans' Top Building Inspector Among Those Suspended Amid Federal Corruption Probe At www.nola.com/news/courts/article_72a7d72e-df1f-11e9-97c7-83f3619becbf.html?fbclid=IwAR1DIxPS7A-vuGCvMlOA5xfJYlIR6J62UHpKJDXMct5-Jv1AGm68WP_8r-c