Introducing Middle & High School Students To A Life-Long Career In The Unionized Building Trades: Kids Want To Like The Work They Do 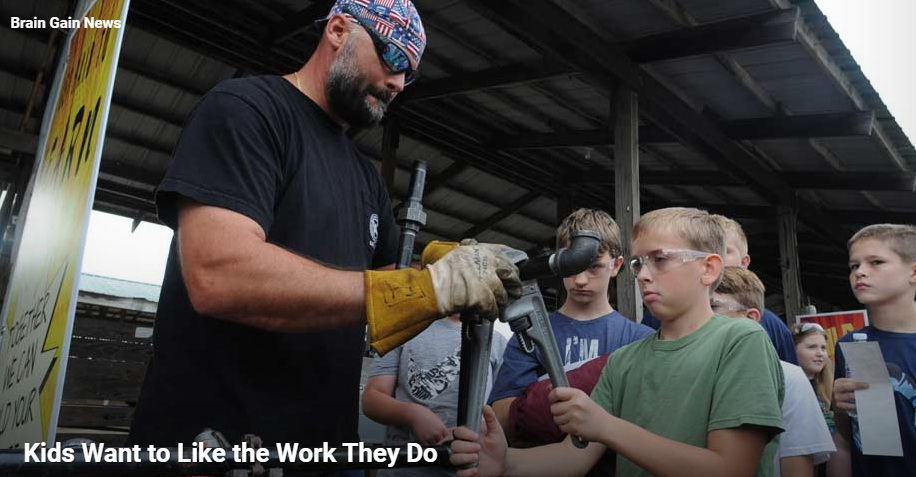 (YOUNGSTOWN, OHIO) - Before demonstrating his work as a Unionized Pipefitter, Joe Longo asked the groups of Middle School and High School Students the same question.

“How many of you are thinking about going to college?,” asked the Member of the Plumbers and Pipefitters Local 396.

Nearly all hands being raised was the reply from just about every group.

What he said next drew an audible gasp from the students.

“We’re the highest-paid Trade. We make anywhere from ($58) an hour, total package,” he said.

The “oohs” from the students would lead one to believe Longo had sold them all on careers as Pipefitters.

However, when some of the students attending the inaugural and recently-held Mahoning Valley Skilled Trades Expo were asked what’s most important to them in a career path, their answers revealed something different.

“You have to do something you love,” said Veronica Sanders, a junior at Howland High School who plans to study photography in college. “If you get a lot of money, but you’re doing something you don’t like, it’s not going to be worth it.  You have to love it to do it.”

“Making good money and being secure in your job is very important, but I think enjoying yourself and doing something you love is definitely mandatory,” echoed Haley Smith, a Howland junior who wants to pursue a career as a Registered Nurse.

“If you don’t really love what you’re doing then why are you even at that job?,” asked Alyssa Stickler, a sophomore at Sebring McKinley High School - who wants to own a bakery, but said she attended the event to find out about other options in the area.

Many of the nearly 4,200 students who attended the Mahoning Valley Skilled Trades Expo seemed to agree with the value of doing what one loves - but the benefit in earning good wages out of high school was not lost on them.

Kaden Bandy, a junior from West Branch High School in Beloit, said one of the presenters he heard that day shared his own experience of making $80,000 annually out of high school.

The only drawback, Bandy said, was the travel.

“He was gone for six months in California - but if you’re out of high school, you don’t have a family to provide for and you’re mainly on your own, so it doesn’t really affect you,” Bandy said.

After he graduates from high school, Bandy said he plans to study education in college.

“Teachers have made a big impact on my life,” and he hopes he can do the same for others, he said.

However, attending the Expo at the Canfield Fairgrounds opened his eyes to other opportunities available, particularly working as a Lineman.

What really caught his attention was the fact the Trades pay for training - “So you won’t be in debt like you would be in college,” he said.

To Continue Reading This Labor News Story, Go To: https://businessjournaldaily.com/kids-want-to-like-the-work-they-do/