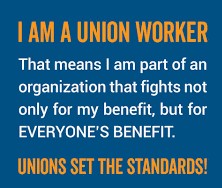 I have been a Member of the New York City and Vicinity District Council of Carpenters for 31 years - and if it weren’t for the health benefits I receive from the Carpenters' Union and the sacrifice made by a fellow Member, I very well could have lost my life to Stage Six Kidney Disease this year.

From personal experience, and the experience of many at the New York City and Vicinity District Council of Carpenters, I know the Union offers unparalleled support to its Members.

When push comes to shove, the Carpenters' Union has your back - whether that means fighting for fair wages and workplace safety standards, or in my case, securing health care benefits.

I am proud to be a part of an organization where nobody, not even a 55-year-old Retiree, is left behind.

In May 2019, I was able to receive a kidney transplant thanks to a young, single mother from the South Bronx.

I met this woman, Alexandra, only once, in 2016, at a Leadership Training Session at the United Brotherhood of Carpenters International Training Center.

Despite our many differences - age, gender, race and years with the Union - we quickly became friends.

I spent only three days with Alexandra, yet she was the very reason why I survived kidney disease.

After the training session, the next time I saw Alexandra was three years later, at New York–Presbyterian/Columbia University Medical Center, where she selflessly donated one of her kidneys to save my life.

Alexandra became my donor because she had attended a training session a few months earlier where she discovered that I was sick and in desperate need of a donor.

Without hesitation, Alexandra contacted me and shortly after became my Guardian Angel.

These training sessions occur frequently and not only provide Members and Apprentices the necessary skills to thrive in our industry - but give us an opportunity to bond with others from different parts of the state and country.

Without the New York City and Vicinity District Council of Carpenters, Alexandra and I would not have been able to afford this transplant or the recovery after the surgery.

Without this Union, I would never have thought that I could survive Stage Six Kidney Disease.