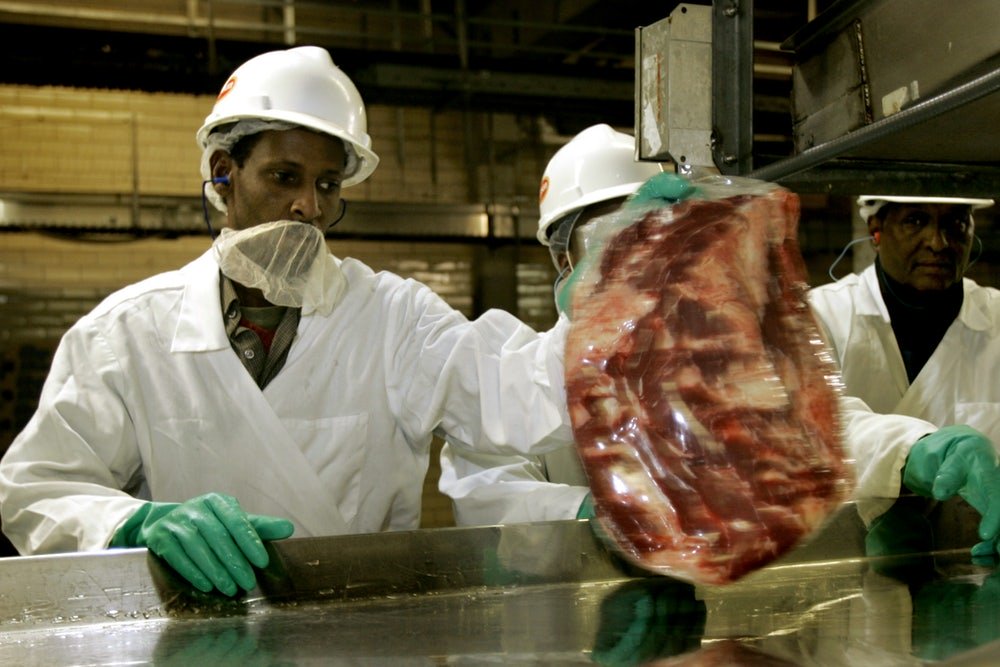 It was more than a century ago that Upton Sinclair went undercover in Chicago’s stockyards, resulting in his reported novel The Jungle.  A blood-splattered portrait of the American Meatpacking Industry, it documented the misery and filth of the city’s slaughterhouses, where miserable Workers churned out cuts of rotten meat in treacherous, rat-infested conditions.

“The air would be full of steam, from the hot water and the hot blood, so that you could not see five feet before you,” Sinclair wrote. “And then, with men rushing about at the speed they kept up on the killing-beds, and all with butcher-knives, like razors, in their hands well, it was to be counted as a wonder that there were not more men slaughtered than cattle…”

We have The Jungle to thank for certain Food Safety Regulations today.

Protections for Meat Industry Workers, though, would come later - and President Trump has been trying to undo even that modest progress.

His administration last year authorized faster “line speeds” (the number of animals killed per minute) for poultry plants, and began looking into doing the same for beef.

New U.S. Department of Agriculture (USDA) regulations that take effect in December will allow the same at pork plants, while also cutting 40% of Government Inspectors and delegating inspections to Employees, who may not have undergone any kind of training in food safety.

The United Food and Commercial Workers International (UFCW) Union and an Advocacy Group, Public Citizen, is suing the Trump Administration over the new rules, saying that faster line speeds will increase Worker injuries.

U.S. Bureau of Labor Statistics (BLS) show the injury rate for Meat Packing Workers is 2.4 times higher than the national average for all industries.

Trump is taking an already dangerous, dehumanizing job, and making it even more so.

But these changes also pose a risk to millions of Americans who will never set foot in a slaughterhouse, as the lack of proper oversight in identifying sick animals or hygiene issues increases the risk of foodborne illnesses for meat eaters.

“With less government oversight over hog slaughter inspection, big meat companies will have the freedom to inspect themselves and push towards their goal of increasing line speeds,” the non-profit Food & Water Watch told Newsweek. “There’s no doubt about it: faster line speeds plus less inspection equals more food contamination.”

To Continue Reading This Labor News Story, Go To: https://newrepublic.com/article/155363/trump-meatpacking-processing-plant-rules-upton-sinclair-jungle?utm_source=newsletter&utm_medium=email&utm_campaign=tnr_daily&fbclid=IwAR3_p4pCridSG2eIuFVGnNrWh0dHgy0dWb1l_R8wnSjYFj6Mgr-WyX-Wv7c