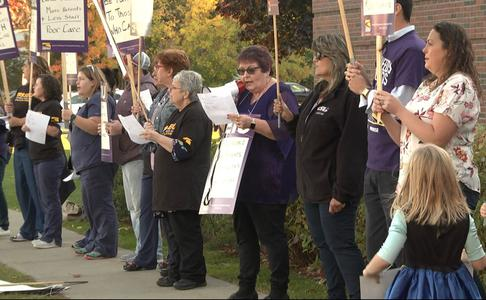 In July, the Unionized Nurses and Techs voted down a contract proposal.  SEIU Officials said the deal was voted down because it increased the cost of health insurance by at least 7%.

“It’s just ‘very discouraging’ that a health care facility ‘doesn’t care about providing’ health care for its Workers and families,” SEIU Regional Director Kathy Tucker said.  "We ‘don’t want them to pay the whole shot, we just want to make it so it’s affordable.’”

According to the Union, the average LPN at Canton-Potsdam Hospital makes $2,500 a month and SEIU Officials say about half the paycheck would go to the health care premium for a single person.

“The premiums ‘are too high.’  To have a spouse on, I couldn’t do that,” LPN Monique Fareell said. “If I was to have a kid, ‘I couldn’t have a kid on my insurance and afford that, not with my wage.’”

To Directly Access This Labor News Story, Go To: www.wwnytv.com/2019/10/12/nurses-picket-canton-potsdam-hospital/

Insurance companies make billions in profit - but give very little for those who make them profitable. As a Retiree, I feel the same way about Social Security being treated as an entitlement instead as a benefit we worked so hard for. These health care companies should be ashamed and health care made a priority in all workplaces - Earl Frampton, CWA Retiree and VP NYSARA , Alliance for Retired Americans Posted by Earl Frampton on October 17, 2019 at 2:06 pm