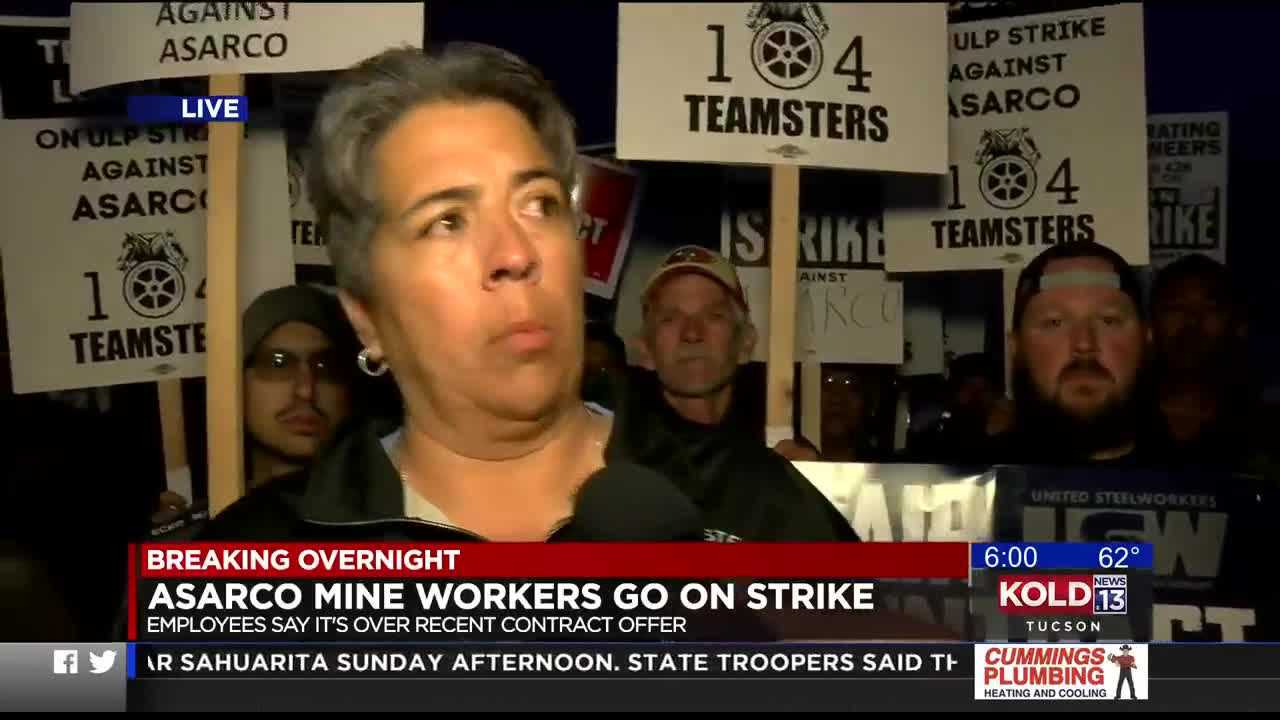 (TUCSON, ARIZONA) – Union-represented Copper Mine Workers walked off the job at five ASARCO LLC locations on Monday (October 14th) and are officially on Strike.  According to the United Steel Workers (USW), 2,000 Hourly Workers employed at mines in Arizona and Texas voted to Strike late last week after working without a new contract since last November.

The Workers had voted overwhelmingly to Strike against Unfair Labor Practices (ULPs) rather than accept the Grupo México subsidiary’s so-called “last, best and final” offer, the USW said.

USW District 12 Director Robert LaVenture said Workers who sacrificed to sustain the company during past downturns have earned and deserve a fair contract with better and more secure earnings, benefits and pensions, but ASARCO has proposed the precise opposite.

ASARCO’s four-year contract proposal “insulted” Union Members at all of the facilities by including no wage increase for nearly two-thirds of Workers, freezing the existing pension plan, and more than doubling the out-of-pocket contribution individual Workers already pay for health care, LaVenture said.

“Working twelve-hour shifts in an open-pit mine, smelter or refinery is ‘difficult and dangerous,’ and ASARCO Employees ‘have not had a wage increase in ten years,’” LaVenture said. “These Workers ‘deserve a contract that reflects their contributions.’”

LaVenture said that the USW is willing to resume bargaining and ready to meet as long as necessary to negotiate a fair contract and urged management to make resolving the Labor dispute an urgent priority.

“We cannot allow ASARCO managers – even when directed by Grupo executives in Mexico City – ‘to pick and choose which ‘U.S. Labor Laws and Standards ‘apply to them, and the company can’t expect to roll back generations of collective bargaining progress without a fight,” LaVenture said. “Management has ‘tested’ these Employees ‘for years and we’ve met their challenges each step along the way.’  When we march together for fairness and justice at ASARCO, ‘we are delivering a unified message that the company’s attacks on our livelihoods must end and that we are standing up for respect and dignity from this employer.’”

Late in the evening of Friday (October 11th) after the counting of ballots, the USW - on behalf of itself and the nine other Unions representing ASARCO Workers, provided 48 hours’ notice to terminate the extension agreement under which the parties have worked since December 1st, 2018.  Following the termination of the extension agreement, picketing began simultaneously at ASARCO’s Arizona properties at 11 p.m. (Pacific Daylight Time) on Sunday, October 13th and at 1 a.m. (Central Daylight Time) on Monday, October 14th at its Amarillo, Texas Facility.

The USW represents 850,000 Members who are employed in Metals, Mining, Pulp and Paper, Rubber, Chemicals, Glass, Auto Supply and the Energy-Producing Industries, along with a growing number of Workers in Public Sector and Service Occupations.

To Directly Access This Labor News Story, Go To: www.usw.org/news/media-center/releases/2019/thousands-to-strike-against-asarcos-unfair-labor-practices