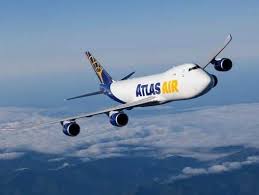 (WASHINGTON, D.C.) - At the request of the Pilots at Atlas Air, Teamsters General President Jim Hoffa and the Teamsters General Executive Board have approved the formation of Teamsters Local 2750, a newly-created Local Union dedicated to the Pilots.  There are about 2,000 Pilots who will be Members of the Union which will be headquartered in Ohio.

"We're excited about this great opportunity, which is part of our natural journey through Unionism as we grow in numbers," said Bob Kirchner, the Chairman of the Pilots' seven-Member Executive Council and an Atlas Air pilot.  "We have a great relationship with Local 1224 and we're grateful for the opportunity to have been a part of the Local.  It's because we've come together and grown over the years that we have this opportunity to form Local 2750 and we look forward to what is to come."

Atlas Air services customers in e-commerce, including Amazon and DHL, as well as the U.S. Military.

"As our negotiations with Atlas for a Collective Bargaining Agreement continue, we expect to make progress with our motivated group of Local 2750 pilots.  Over the coming weeks, we will keep the Pilots Group informed on developments with our local and more ways they can get involved in their Union," Kirchner said.

Founded in 1903, the International Brotherhood of Teamsters represents more than 1.4 million Members throughout the United States, Canada and Puerto Rico.

To Directly Access This Labor News Story, Go To: https://markets.businessinsider.com/news/stocks/atlas-air-pilots-announce-formation-of-new-local-union-1028564841