Strike/Contract Negotiation Update: The Detroit Free Press Reports The UAW Has Made A Counterproposal To GMs Latest Offer  UAW VP Terry Dittes Says If GM Accepts: We Will Have A Tentative Agreement 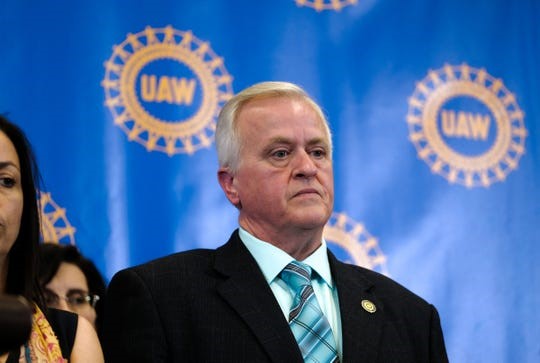 (DETROIT, MICHIGAN) - The United Auto Workers (UAW) submitted a counterproposal Friday night (October 11th) to the General Motors (GM) Company responding to a contract offer the automaker made earlier in the week on Monday.  The offer included "all of your outstanding proposals that are at the main table and unsettled," UAW Vice President Terry Dittes said in a letter to Local Union Leaders. If GM accepts, "we will have a Tentative Agreement," he wrote.

Dittes (pictured above) said Union Representatives would work through the weekend in hopes of reaching a settlement to end a Nationwide Strike by 46,000 Workers that is nearing the one month mark. His letter did not disclose any of the proposal's terms.

A GM spokesman said the company did not expect to respond to the UAW offer Friday evening.

The proposal comes after GM CEO Mary Barra and Gerald Johnson, GM's Executive Vice President of Global Manufacturing, met Wednesday with UAW President Gary Jones and Dittes.  The meeting was an attempt to jump-start negotiations after talks between the automaker and the Union had stalled.

At that meeting, Barra "emphasized the need to get a comprehensive response from the Union as soon as possible," GM Vice President of Labor Relations Scott Sandefur said in a letter to Dittes Thursday night.

Dittes had said in a statement Thursday night that the Union agreed to have committees work on issues until they could submit a comprehensive proposal.  Committees include those addressing the Training Center and the future of work for UAW Members.

GM's latest offer to the UAW included $2 billion more in investment by the company than an offer it made four weeks ago.  In total, GM would commit to $9 billion worth of direct and indirect investments.  Of that, $7.7 billion would be direct investments, including building an electric truck at the Detroit-Hamtramck Assembly plant.  That factory is among four GM facilities in the U.S. that were to be idled.  In the 2015 contract, GM had pledged $8.3 billion in investments.

The offer also includes increases in Employee compensation, as well as retaining health care coverage and creating a pathway for Temporary Employees to become permanent, according to a letter GM sent Friday to hourly and salaried employees.  No specifics were given.

In an escalating war of words Friday, the Union responded with a strong statement saying at every step in negotiations GM "has attempted to undermine the ongoing, good-faith efforts the UAW has made to end this Strike."

"The company’s strategy from day one has been to play games at the expense of the Workers.  It has released half-truths, ripped away health care in the middle of the night and it reverted to previously weak and unacceptable proposals in response to the UAW’s comprehensive solutions. Our Members are ready to get back to work, but GM is purposefully stalling the process to starve UAW-GM Workers off the picket lines to protect millions of dollars of corporate bonuses."

To Continue Reading This Labor News Story, Go To: www.detroitnews.com/story/business/autos/general-motors/2019/10/11/strike-day-26-gm-gives-workers-some-details-its-offer-uaw/3941511002/