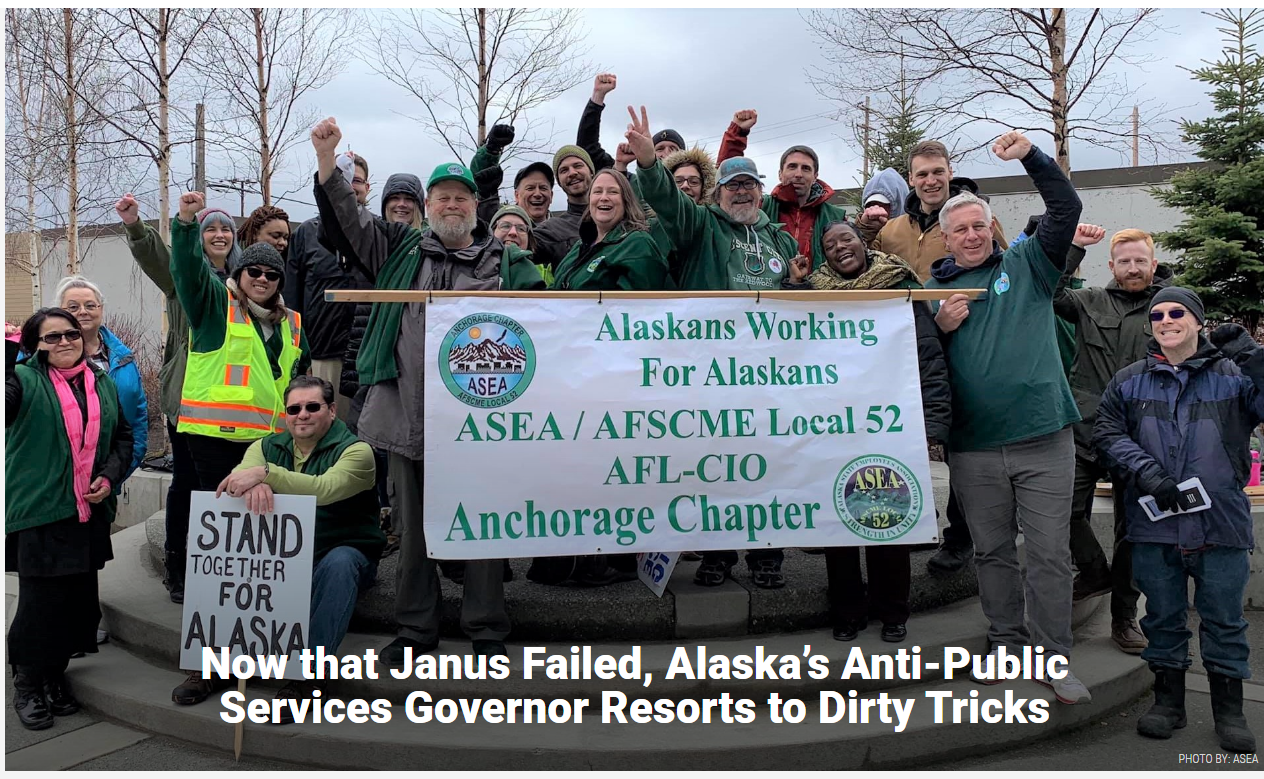 (JUNEAU, ALASKA) - The U.S. Supreme Court’s Janus decision in 2018 was a challenge without precedent for Workers and their Unions in the Public Sector, but it’s made one thing clear: Public Service Workers – including, and especially, Members of American Federation of State, County & Municipal Employees (AFSCME) – are sticking with their Union no matter what.

The wealthy individuals, corporations and dark money organizations that funded the Janus case, and the politicians who do their bidding, wasted millions of dollars and decades of effort.

Janus had been their best chance to diminish the power of Working People by attacking their Unions, and they’ve failed.

But unfortunately, they’re not done yet.

In effect, they’re trying to rob Public Service Workers of their freedom to have a voice on the job.

Through an Administrative Order, Dunleavy and Clarkson want to make it harder for Unions in the Public Sector to collect dues – and they claim they’re following the letter of the law in Janus.

Fortunately, their dirty trick is fooling no one.

An Alaska Superior Court Judge recently ordered them to halt any effort to implement the new rule, issuing an opinion strongly in favor of the Alaska State Employees Association (ASEA)/AFSCME Local 52, which sued to block it.

ASEA Executive Director Jake Metcalfe called it “a victory for all Alaska Workers,” adding Dunleavy “views Public Service Workers as nothing more than an obstacle to his plans to dismantle the critical services Alaskans rely on every day.”

AFSCME President Lee Saunders called the judge’s decision “a major win for Alaska Public Service Workers and yet another example of what happens when politicians try to steal their freedom to form strong Unions that make our communities safe, healthy and strong.”

The Administrative Order is but the latest attack on Public Service Workers by the State’s Anti-Public Services Governor.

Back in the Spring, Alaskans were reeling from Dunleavy’s budget proposal, which unfairly targeted for elimination or outsourcing programs serving vulnerable residents and was expected to lead to the loss of at least 7,000 jobs.

AFSCME has vowed to continue to fight attacks against Public Service Workers, no matter where they come from - and that their Members will “continue to stick together.”

To Directly Access This Labor News Story, Go To: www.afscme.org/now/now-that-janus-failed-alaskas-anti-public-services-governor-resorts-to-dirty-tricks