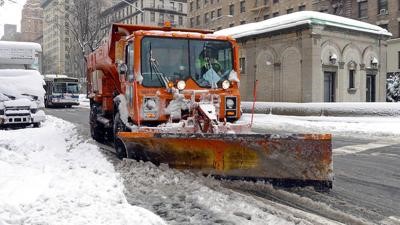 (NEW YORK CITY) - While Mayor Bill de Blasio’s Administration insists it is ready for any snowstorms that could hit, Union Leaders representing both Sanitation Workers and Auto Mechanics warn that it is dangerously short on Mechanics who can keep the Sanitation fleet in service and with brakes that will hold up in icy conditions.  They called for additional hiring.

Two veteran Union Leaders are sounding the alarm that the de Blasio Administration does not have enough certified Mechanics to ensure the Department of Sanitation snow fleet can handle a major snowstorm this Winter.

Harry Nespoli, President of the Uniformed Sanitationmen’s Association, said Mayor de Blasio was in the same situation as Mayor Michael Bloomberg before the botched December 2010 blizzard response that turned out to be a major embarrassment for his administration.

“I spoke to Bloomberg that August and told him that ‘we didn’t have enough manpower to protect the people in the city, and he turned around and he just said I had to do more with less,’” Nespoli recalled.

This year he said the critical gap involved qualified Mechanics to keep sanitation vehicles in service.

“You could ‘have all the salt in the world, and you could have the manpower we have, and we could do it.’  ‘But if you don’t have the equipment, what are you going to do?,’” he said. “I understand they are now sending our sanitation trucks out to private sector Mechanics ‘and they are coming back in such a way that our guys have to work on those same trucks.’  ‘Whoever is in charge of this should be fired.’”

The city maintains it is ready for winter.

“Last month, we began our snow training, which includes checking equipment, ‘plowing up’ collection trucks, and having our Sanitation Workers drive plows and salt-spreaders on set routes across the five boroughs,” Sanitation Department spokesman Vito Turso told The New York Daily News. “We have (290,000) tons of rock salt on hand, we have salt-spreaders that are being upgraded, and we have new salt-spreaders that will be ready to roll out in the coming weeks.”

According to Joe Colangelo, President of Service Employees International Union (SEIU) Local 246, which represents city Automotive Mechanics and related Trades, the size of the snow fleet has nearly doubled over the last few years - but the number of Mechanics has failed to keep pace.

Four years later, the city had 1,037 pieces of snow-related equipment.

To Continue Reading This Labor News Story, Go To: https://thechiefleader.com/news/news_of_the_week/unions-warn-mechanic-shortage-puts-city-at-risk-from-winter/article_b439fafe-ea0b-11e9-b482-0b47a0918ad7.html