I Understand What This Means, UAW/GM Worker Anton Bassham Says As He Walks The Line Outside The Tonawanda Plant During A Solidarity Rally That Draws 300 Supporters From A Variety Of Western New York Unions 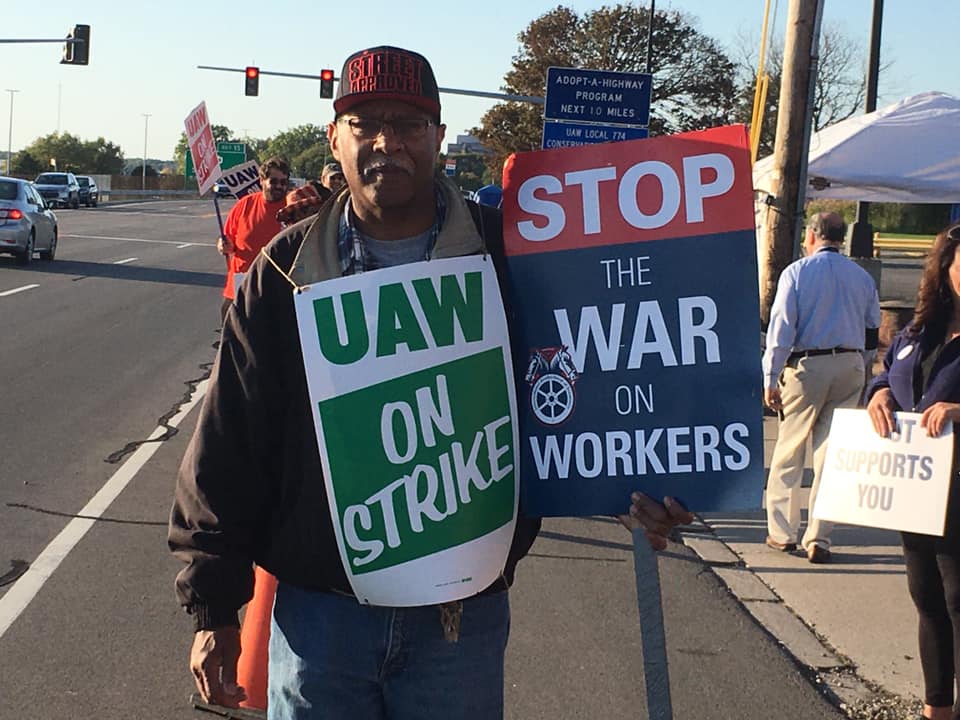 (TONAWANDA, NEW YORK) – Anton Bassham isn’t a young guy, having worked at two General Motors (GM) Auto Plants in Western New York for a total of 31 years.  But that’s not keeping him from walking the line outside GM’s Tonawanda Engine Plant five to six days a week in support of his fellow United Auto Workers (UAW) Brothers and Sisters here and across the country who are part of what is now a more than four-week Strike in a fight for a fair contract.

“I ‘understand what this means,” UAW Local 774 Member Bassham (Pictured Above & Below/WNYLaborToday.com Photo) told WNYLaborToday.com as a car drove by, one of its windows lowered so the driver could coldly yell out: “Go back to work.”

“We’ve ‘got to stand up.’  We ‘gave up a lot’ of concessions (in the past) ‘and we want a fair shake.’  ‘Makes no sense that young people are working at Burger King making ($15) an hour while there are guys in the plant making ($15).’  ‘We’re the backbone of our industry and we will do what is necessary.’  ‘A win for the Union is a win for everyone, everyone makes out in the end,’” he said. 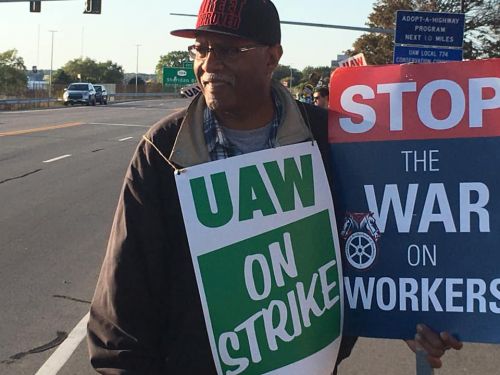 Showing their support for their striking UAW Brothers and Sisters, an estimated 300 area Union supporters joined together in what was described as a “Solidarity Rally” outside the River Road Plant on Wednesday (October 9th) in support of the 1,300 Tonawanda Workers who are on Strike there.  A second such rally is scheduled for today - Thursday, October 10th, outside of GM’s Lockport Plant up in Niagara County. 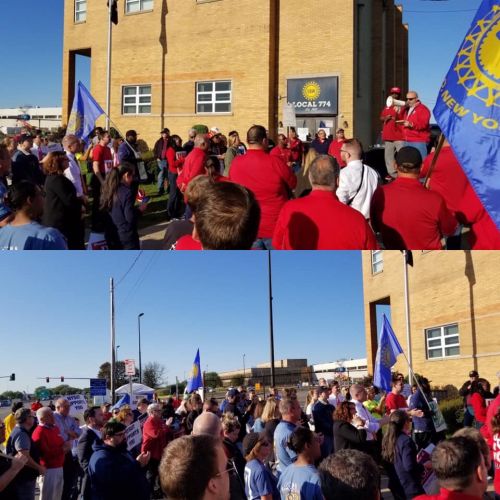 Their Union Colors stood out and their individual Union flags were raised high, snapping in the light breeze and they walked the line with the UAW Workers.

One Union Rep (Pictured Below/WNYLaborToday.com Photo) wore a shirt with the words: “I Am In The Fight” on its back. 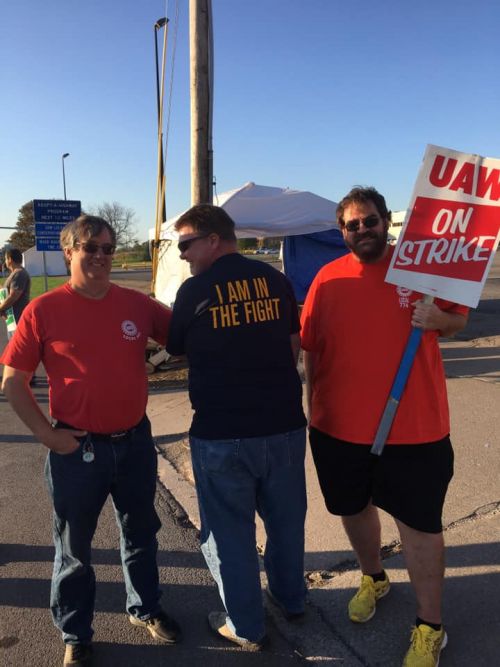 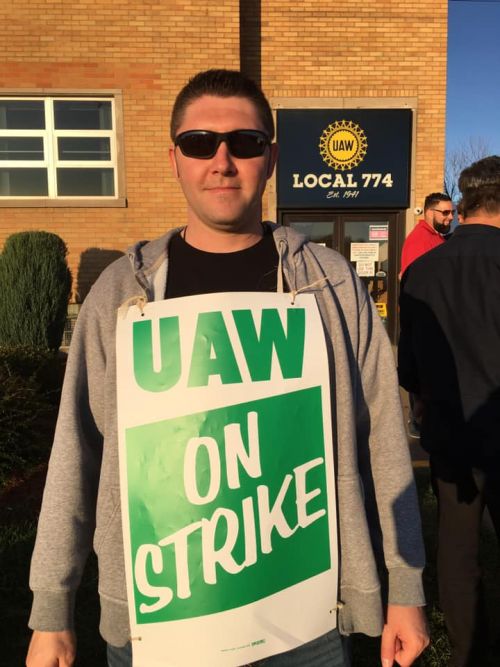 Bronstein has been laid off twice for a period of six months – twice - during the past six years that he has worked as a temp at the Tonawanda Plant.

He tells Your On-Line Labor Newspaper he stays in the job for the health care coverage he receives working under a Union Contract.

“I’ve ‘invested so much here (over the course of time) and it’s better than some other jobs here in Western New York,’” he said of his reason why.

Asked how he and his fellow striking UAW Members are doing, Bronstein says: “I’m ‘not struggling as hard as some others with families and kids are’.  ‘I feel bad for them.’  ‘But today’s showing (of Union support) is overwhelming.’  ‘It makes me happy.’”

BTF President Phil Rumore was there to walk the line.  Asked why, he answered simply: “Their ‘battle is our battle.’”

Area Unions have contributed to the UAW Workers in order to make their lives a bit better while on Strike, from donating tons of chopped wood for fire barrels on the line to raincoats for the Strikers to wear to all kinds of food and cases and countless cases of water.

“We brought down twenty ($30) gift cards for the UAW Workers to buy food at a local grocery store chain ‘and there will be more’ (donated),” Rumore pledged.

Also among the local Unionists in attendance was Buffalo AFL-CIO Central Labor Council President Denise Abbott, less than 24 hours after being sworn in as the first female President of the Buffalo Labor Council.  She told WNYLaborToday.com: “Because ‘we need to be here.’  It is ‘about’ solidarity - ‘united stand, divided we fall.’  The UAW came out for the CWA (Communications Workers of America) a couple of years ago when they were on Strike against Verizon.  ‘We’re fighting for all the right reasons.’”

UAW Local 774 President J.R. Baker said his heart “was pumping” as he looked out over all the assembled Unionists: “This rally was ‘so powerful,’ looking out at all those (Union) flags.  ‘I am so humbled’ to have all these people come out today.”

Baker says his UAW Membership’s morale “is great” and has been buoyed further by the recent appearance of an 87-year-old UAW Member who came down to walk the picket line several days ago outside the Tonawanda plant.

“We have twelve gates (going in and out of the plant) covered with our Members manning six shifts, twenty-four-seven,” said Baker, who has worked at the GM Plant for 21 years as a skilled Millwright.  “This company ‘is profitable as ever, but they still cut our pay in half and they stopped paying our pensions, all while (management) took raises.’  We’re striking ‘for the’ Middle Class, ‘for Workers who can’t fight for themselves, for people who want to have a Union (in their workplace).’”

UAW Local 774 Trustee John Orsini (Pictured Below, On the Left, With Buffalo Teachers Federation President Phil Rumore/WNYLaborToday.com Photo), who also serves as his Union’s Community Services Chairman, told WNYLaborToday.com: “Our Members ‘are holding up and looking out for each other.’  We’re ‘here to help’ our Members, we’re working with organizations like the United Way ‘if they need help paying their bills.’  ‘We’re keeping an eye on them.’  ‘I don’t have a crystal ball (in terms of saying how much longer the strike will go on), but we’ve not taken a step back at all.’  ‘We’re going to stay out until (the UAW gets a fair contract from GM).’” 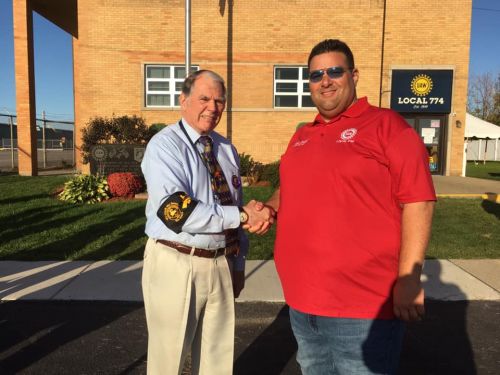 Key Sticking Point: GM And UAW At Odds Over What Will Be Made In America At www.freep.com/story/money/cars/general-motors/2019/10/09/gm-strike-update-vehicle-demand-ratification/3919256002/?fbclid=IwAR36L7G3hfPTghF49nOjiUmpz_noHzoCqdQV5Bw-uTuSZftYEuTXWeeAWCE

Terry Dittes: The UAW Officer Leading Talks With GM Is From The Assembly Line And Ready To Fight At www.freep.com/story/money/cars/general-motors/2019/10/09/gm-strike-status-uaw-lead-bargainer-dittes/3909240002/?fbclid=IwAR35JSv27vX09wkVhgrkvzJXj0UMZ12jXeSkNHxWQJxVHRAg7bpQv8r8fHg