Outgoing Buffalo Labor Council President John Mudie  President of CWA Local 1122, Steps Down In Order To Focus More Time On His Own Unions Needs After Serving Nearly Six Years At The Helm Of The Nearly 90,000-Member Labor Organization

(BUFFALO, NEW YORK) – Denise Abbott, a Critical Care Registered Nurse (RN) represented by Communications Workers of America (CWA) Local 1168, has been sworn in as the interim President of the Buffalo AFL-CIO Labor Council – in the process becoming the first female President in the history of the Buffalo Central Labor Council.

Abbott, who works at DeGraff Hospital in North Tonawanda and who also serves as Health and Safety Officer for her CWA Local, steps in for outgoing Buffalo AFL-CIO President John Mudie, President of CWA Local 1122 in Buffalo – who announced he was stepping down “immediately in order to devote more time” to his own Union Local.

“This is a ‘great’ opportunity,” the 49-year-old Abbott told WNYLaborToday.com on Wednesday (October 9th).  “I’m ‘proud to be part’ of the Buffalo Labor Council ‘and what better way’ (to play a more prominent role).  ‘It also feels great and wonderful being the first female President of the Council - to have that distinction.’  ‘Hopefully it will (inspire) more Women of Labor to come out and get involved and have their voices heard - to be a part of all this.’”

The Buffalo Labor Council and its affiliated Member Unions combine to represent 88,500 Unionized Workers employed in the Public and Private Sectors and in the Building Trades.

Mudie, whose CWA Local represents nearly 1,400 Members who are employed by Verizon, AT&T Wireless, the Visiting Nurses Association - as well as several other employers, described Abbott’s approval by the Buffalo Labor Council’s Executive Board as a “tremendous choice.”

“I am ‘very happy’ with it,” Mudie told Your On-Line Labor Newspaper.  “(Abbott) has a ‘great work ethic, she’s everywhere and she’s young – and it feels good (passing the baton of leadership) to another CWAer.’  Denise and I have ‘worked together closely over the past eighteen months and she’s been my right arm.’”

Western New York AFL-CIO Area Labor Federation (WNYALF) President Richard Lipsitz said of Abbott: “She’s a ‘good’ person ‘and she’ll do a good job’ (for the Buffalo Labor Movement).  ‘We’re very proud to have her and the WNYALF looks forward to working with her.’”

Abbott will serve out Mudie’s remaining term as Buffalo Labor Council President, chairing its monthly meetings in November, December and January.  An election will be held in February for another full-term post, which Abbott says she will run for.

Mudie waited until the end of Tuesday’s meeting to make the announcement that he was stepping down, immediately, before calling Abbott up to the podium where she was sworn in by WNYALF President Lipsitz and presented with a bouquet of flowers. 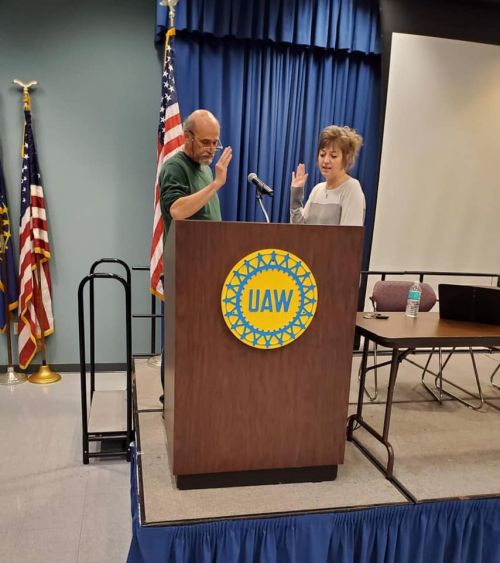 However, after being sworn in, Abbott began to walk away – but was called back by Mudie, who told her “it was her meeting to run.” 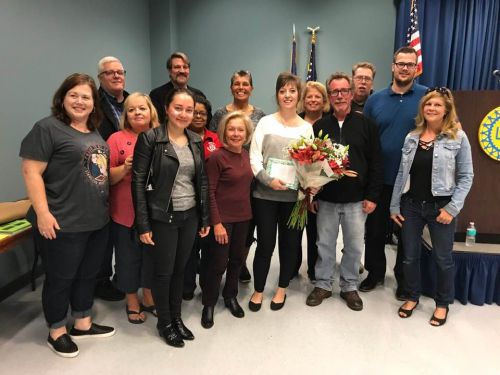 Looking back, Mudie’s tenure as head of the Buffalo Labor Council was extremely important as it transitioned out of financial problems under its previous president several years ago.

Providing a calming influence, Mudie was able to close the gap and build positive bridges at the same time, as well as heightening the involvement of the Council in many community-oriented initiatives - from helping raise and deliver 22 tons of donated water for the residents of Flint, Michigan to involving the Buffalo Building Trades in helping rebuild homes in Buffalo’s Fruit Belt to enhancing the Council’s Workers Memorial in Chestnut Ridge Park and building upon the support for Buffalo’s annual Labor Day Parade and Picnic and the Council’s Summer picnic, to name but a few.

“That ‘sticks out,’” Mudie said of helping Flint residents, who are still battling with tainted tap water brought about mismanagement of government officials in Michigan.  “I’ll ‘never forget that - delivering and handing out cases and cases of water to those in need and the overwhelming way (Buffalo’s Unions and their Members came through with monetary donations).’”

Abbott took time to praise Mudie - telling WNYLaborToday.com: “He ‘lit a path of us to follow, to make us even more proud of what we do.’  He ‘filled’ the room (of the monthly Buffalo CLC meetings) ‘with people who wanted to do such things.’  ‘That says a lot about John and he will certainly be a tough act to follow.’”

As Buffalo President, Abbott told Your On-Line Labor Newspaper that among her goals are to continue Mudie’s legacy by making the Council’s Workers Memorial “even better,” to work closely with the Council’s Affiliated Member Unions - “To be there when they need us,” and to continue to involve the Labor Council in the Buffalo Community with the annual Variety Club Telethon and the United Way.

And, concerning the local political community, she said: “I want to continue to build and foster good relationship, as well as them having them come to us.”

Couldn't think of a 'better' person - Good Luck Denise! Posted by Lawrence Rizzo on October 12, 2019 at 10:44 am
CONGRATULATIONS Denise! THANK YOU John! Posted by Cindy Marlow on October 10, 2019 at 2:33 pm
Absolutely wonderful, perfect choice to lead our Buffalo Central Labor Council! I'm proud of our Buffalo CLC, proud of the honorable and effective leadership that John provided,and looking forward to having our CLC led by one hell of terrific, energetic Union Leader going forward! Posted by David R. Chudy on October 10, 2019 at 12:02 pm