UAW-GM Talks Take A Turn For The Worse, Stall As Week 4 Of Strike Gets Underway - Media Reports Main Reason Is Because GM Refuses To Make A Commitment To Bring Back Any Product Lines From Mexico 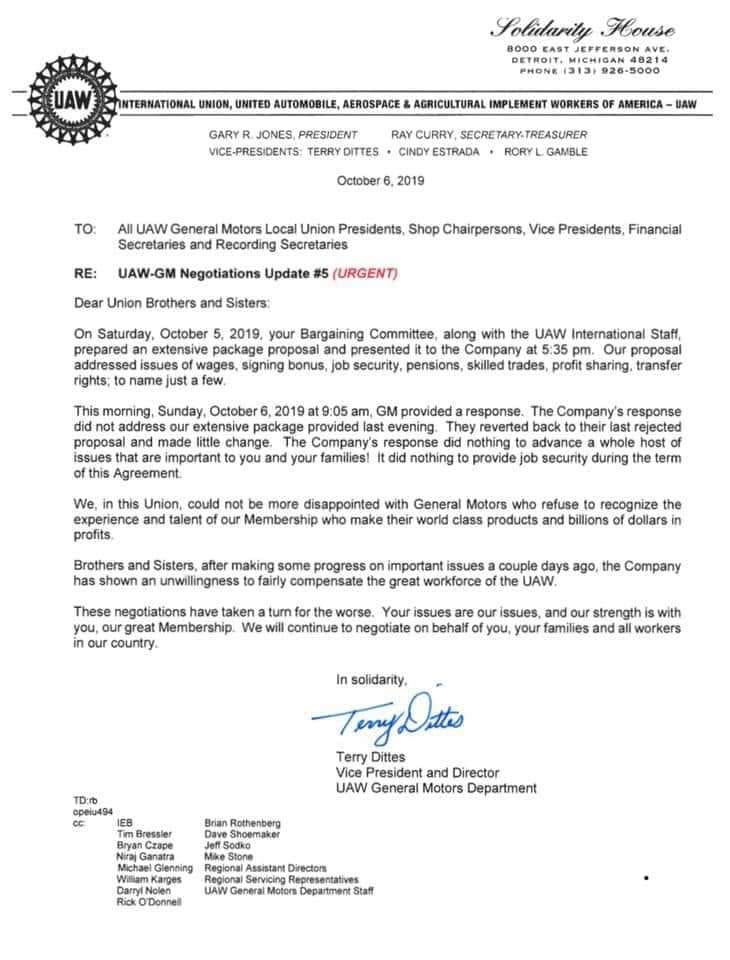 (DETROIT, MICHIGAN) - The United Auto Workers’ (UAW) negotiations with General Motors (GM) have completely stalled going into week four of the Union's Nationwide Strike, a source close to the negotiations told FOX Business on Sunday (October 6th).  The main reason, the source says, is because GM is refusing to make a commitment to bring back any product lines from Mexico.

"We continue to negotiate in good faith with very good proposals that benefit Employees today and build a stronger future for all of us.  We are committed to continuing discussions around the clock to reach a resolution," a GM spokesperson said in response to the source.

Terry Dittes, Vice President of UAW's GM Department, said that negotiations had taken a "turn for the worse" in a letter to Union Members on Sunday.  "We, in the Union, could not be more disappointed with General Motors who refuse to recognize the experience and talent of our Membership who make their world class products and billions of dollars in profits," Dittes wrote. "Brothers and Sisters, after making some progress on important issues a couple days ago, the Company has shown an unwillingness to fairly compensate the great workforce of the UAW."

Nearly 50,000 UAW Members walked out on GM in mid-September.

GM's decision to open and invest in plants in Mexico while closing others in the U.S. is a sticking point for many UAW Members on Strike.

"I would like to see more cars built here in America because it doesn’t just affect us, it affects our communities outside of this plant as well," Moshee Edwards, a UAW Picket Captain, told FOX Business. "There are so many smaller communities, so many businesses that rely on us."

GM countered that it employs three times as many hourly workers in the U.S. as in Mexico (49,000 versus 16,000) and has invested $23 billion in America over the last 10 years versus $5 billion in Mexico.

The company is the largest auto employer in Mexico, which is now home to assembly plants for brands including Ford, Toyota and Honda.

Union Workers have been on edge since GM announced in November 2018 it would lay off Workers and close American plants, an example being a plant in Lordstown, Ohio, where the Chevrolet Cruze was made.

Meanwhile, third parties like the North America's Building Trades Unions (NABTU), are trying to use whatever influence they have to get both sides to come to an agreement.

In a letter obtained by FOX Business, NABTU President Sean McGarvey urged GM to reach an “equitable settlement” with the UAW “as soon as possible.”

McGarvey noted that NABTU, which represents $3 million Construction Workers in the U.S. and Canada, has Pension Funds that hold roughly 7%, or $3.46 billion, of GM shares.

“As owners of the Company, our workforce has repeatedly sacrificed over the last ten years.  We believe it’s time for a fair resolution, especially when GM recorded a net profit of $2.4 billion in just the second quarter of this year alone,” McGarvey wrote in the letter.  “We have watched this Strike closely and remained quiet until now.  We are increasingly concerned with your approach to our Company’s most important asset, its workforce, and the fallout on GM’s ability to generate long-term value for shareholders.”