This Is What It Looks Like To Rebuild The Middle Class - Youve Got To Take A Look At Pipefitters Local 537s New State-Of-The-Art Training Center Up In Massachusetts, Impressive Glass & Steel Building Has A Neo-Industrial Feel 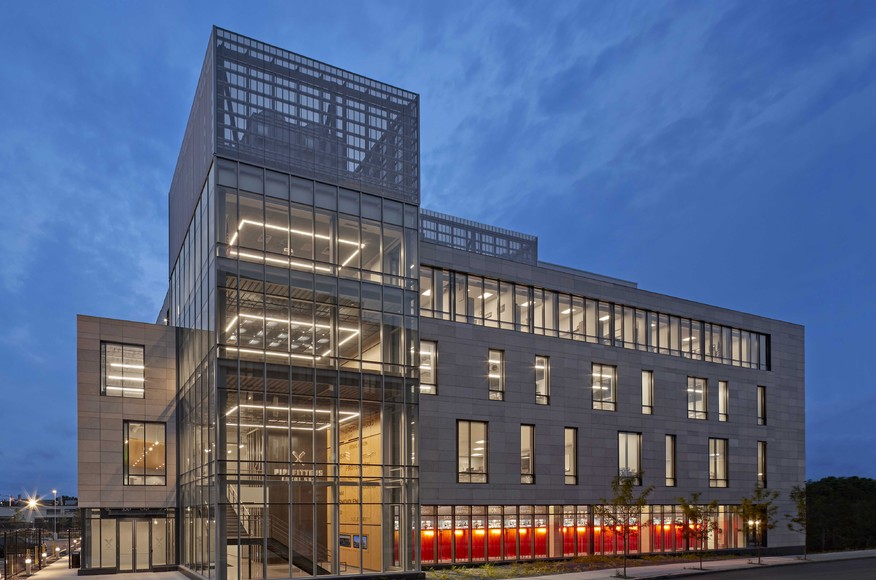 (DORCHESTER, MASSACHUSETTS) - For Pipefitters, work is a family affair.

Earlier this year, Pipefitters Local 537 in Boston held an open house at its new Training Center in Dorchester, where officials say over the next four years 500 new Workers will be trained for construction jobs.

But the gathering that occurred felt more like Thanksgiving.  Children wore colorful face paint, and scampered across a hall set up with tables.

Water and soft drinks chilled in metal tubs of ice and trays full of food were laid out for hungry guests.

Members of the Union brought along family and friends, and retirees met with colleagues they hadn’t seen in years.

The Training Center on Enterprise Street is on the same spot as an old center the Union had demolished.

The 70,000-square-foot building has four floors, including classrooms, a welding shop and other spaces to train aspiring Pipefitters.

The glass and steel building has a neo-industrial feel.

It has smooth, clean surfaces and floor-to-ceiling windows create an airy feel.

Inspiring words like “Apprenticeship” and “Craftsmanship” appear on decorative metal pipes and a wooden wall in the lobby.

The Union’s Apprenticeship Program, which is offered for free, takes five years to complete.

New Trainees take classes provided by the Union at the center and work on job sites.

Apprentices will learn to install and service pipes for both commercial and industrial uses.

In the midst of a building boom, those skills are in high demand, said Brian Kelly, the union’s business manager.  “We’re ‘extremely busy,’” Kelly, a fifth-generation Pipefitter, said. “We have over five hundred Apprentices – ‘the most in our history.’”

The new building has enabled the Union to bring its Union Office, Benefits Office and Training Programs under one roof.

While construction was underway in the last year, Local 537 partnered with other Unions in the area to find other places to train its Apprentices.

“This is what it looks like to rebuild the Middle Class,” he said.

Dylan Perez, 24, is looking forward to his career as a Pipefitter.  He’s now in the fourth year of the five-year Apprenticeship Program.  Perez said the Union was the “best career path” for him.  “I’ll probably be doing this for life,” he said.

To Directly Access This Labor News Report, Go To: www.bostonglobe.com/metro/2019/03/30/pipefitters-local-shows-off-new-training-center/XYyLIvDXY1bbQgLwLQ2gWP/story.html