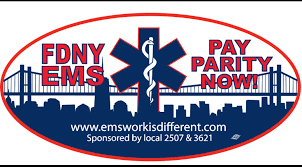 “Equal pay for equal work ‘is a basic human right,’” James said on the steps of City Hall. “Our EMS and EMT (Emergency Medical Technicians) Workers ‘dedicate their lives to supporting us and it is past time we give them the support they deserve.’”

Local 2507 Uniformed EMTs, Paramedics & Fire Inspectors Union Local 3621 Uniformed EMS Officers Union and the EMS Superior Officers Association have all claimed in a lawsuit that Emergency Technicians receive $8,000 less in base pay compared to other First Responders - despite providing lifesaving care and putting themselves in precarious situations.

“Our Members ‘put their lives on the line every day to protect New Yorkers just like every other First Responder,’” said Oren Barzilay, the President of Local 2507 Uniformed EMTs, Paramedics, and Fire Inspectors. “They ‘should not have to sue the City of New York just to receive the equal pay and benefits they have earned and that they deserve.’”

They may not put out fires or stop criminals, but EMTs received 1.8 million calls for the FDNY and have been at the scene of dangerous fire emergencies for 80% of those requests, they have braved shootouts to help save victims, and have been assaulted by patients in the ongoing opioid crisis, according to elected officials.

The pay gap will only continue to widen by the thousands of dollars within the next four years, according to the City and State Representatives.

“Discrimination ‘affects all EMS Personnel at all levels within the department,’” said Joseph Pataky, the President of the EMS Superior Officers Association. “While ‘some are hurt more than others, diminishing the respect and value given to the bureau as a whole hurts all of our members, from Entry Level to Deputy Chiefs.’”

EMTs are overwhelming Women and People of Color and they have allegedly been disciplined more for minor infractions like taking too long for bathroom breaks, elected officials charge.

“Paramedics and Emergency Medical Technicians ‘save lives every day,’” said Johnson. “We ‘need to treat them like the skilled and valuable professionals they are, which means paying them fairly.’  ‘More than half of this workforce is Women and People of Color, yet they earn thousands of dollars less than Firefighters who are predominately White Men.’  ‘Both are FDNY Members, both perform life-saving work.’”

To Continue Reading This Labor News Story, Go To: http://laborpress.org/emts-demand-pay-parity-in-2019/