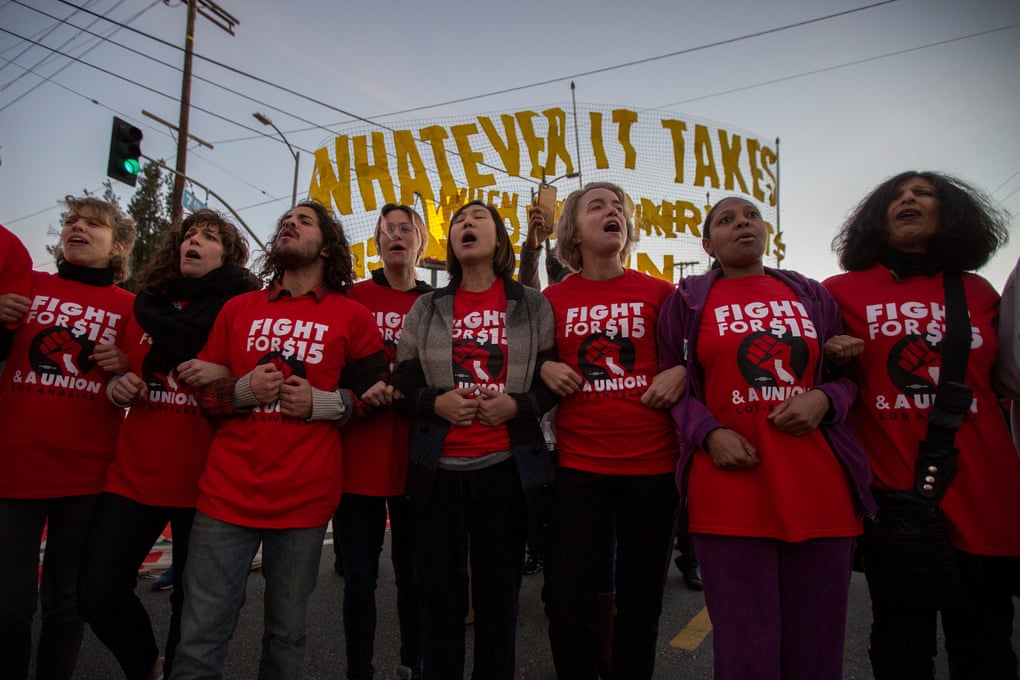 (NEW YORK CITY) - The Fight for $15 Low Wage Movement has long had two goals: Winning a $15-an-hour wage for low paid Workers and a Union for Fast Food Workers.

On wages it has been a major success – seven states have enacted Minimum Wage Laws scheduled to reach $15 – but so far it has made little progress Unionizing Fast Food Workers.

But that could soon change.

A Manhattan-based Union Local that works closely with the Fight for $15 has launched an effort to Unionize Chipotle and McDonald’s Workers, getting Workers at more than 50 restaurants to sign Pro-Union Cards.

“We’re running a campaign for Workers in an industry ‘that has been abusing its Workers,’” said Kyle Bragg, the President of the Local carrying out the Unionization Drive - Local 32BJ of the Service Employees International Union (SEIU). “These Workers ‘want’ a Union.  ‘We’re organizing in order to lift Workers and improve their lives.’”

Until now, the Fight for $15 – which was underwritten by the Service Employees International Union (SEIU) – hadn’t begun a formal Unionization effort at fast food restaurants.

When Fight for $15 began in late 2012, its original strategy was to exert so much pressure on McDonald’s that the Fast Food Giant would agree to sit down and discuss wages and other matters - and perhaps, promise not to resist Unionization efforts, but McDonald’s has refused to talk with the Fight for $15’s leaders.

With its latest effort, Local 32BJ, a powerful Local Union with 175,000 Members, hopes to make clear to Chipotle and McDonald’s that it is intent on Unionizing their restaurants in New York, and they shouldn’t oppose that effort.

Union officials say a majority of the hundreds of Fast Food Workers approached have signed cards supporting a Union.

Jeremy Espinal, who works at a Chipotle in Greenwich Village, said he supports Unionization because managers often treat Workers with little respect.

“The managers ‘try to dehumanize you and try to beat you down mentally as much as they can so they can overwork you and make you feel you’re never doing enough,’” said Espinal, a junior at Hunter College.

Espinal said the work includes lots of lifting and is far harder than he had anticipated.

He also complained that after managers learned he was an outspoken Union Supporter, his hours were cut from 25 a week to 11.

Princess Wright backs Unionization at her McDonald’s in Downtown Brooklyn.  She said the managers “make ‘it seem like they’re for you, but there’s a lot of wage theft and playing around with our hours.’  If we start at 11, ‘they’ll say we started at 11-15.’  Sometimes you work 48 hours a week, and they pay you for only 40.”

She complained managers want Employees to be available to work any time of the week and that they sometimes scheduled her to work certain hours even though she had told managers that those hours conflicted with her college classes.

Workers at various Chipotles and McDonald’s said managers sometimes failed to comply with New York City’s new Fair Workweek Law, which requires giving Fast Food Workers two weeks’ advance notice of their work schedule and paying them premiums when their hours are changed with little notice or they are called in at the last minute.

To Continue Reading This Labor News Report, Go To: www.theguardian.com/us-news/2019/sep/30/new-york-chipotle-mcdonalds-union-fight-for-15?fbclid=IwAR32k8yWdg3iW8-LxVUxUpqm1SMIsHQXqsdZW1iEuLYstoIjKfGyiUTaN4A