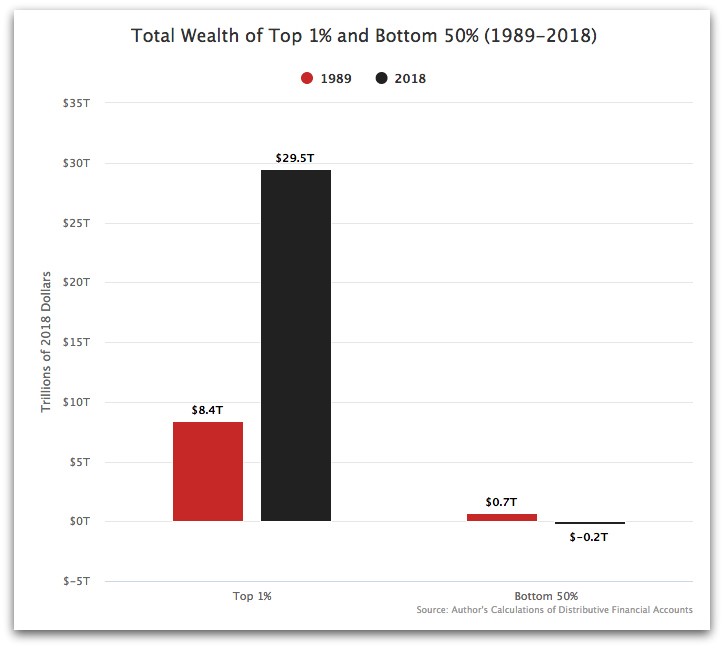 Adding to the mountain of statistical evidence showing the severity of U.S. inequality, an analysis published late last week found that the top 1% of Americans gained $21 trillion in wealth since 1989 - while the bottom 50% lost $900 billion.

Matt Bruenig, founder of the Left-Wing Think Tank People's Policy Project, broke down the Federal Reserve's newly-released Distributive Financial Accounts data series and found that, overall, "the top one percent owns nearly $30 trillion of assets while the bottom half owns less than nothing, meaning they have more debts than they have assets."

The growth of wealth inequality over the past 30 years, Bruenig found, is "eye-popping."

"Between 1989 and 2018, the top one percent increased its total net worth by $21 trillion," Bruenig wrote. "The bottom 50 percent actually saw its net worth decrease by $900 billion over the same period."

"We have the worst inequality in this country since the 1920s," wrote Jayapal, co-chair of the Congressional Progressive Caucus. "Three wealthiest people in America have as much wealth as the bottom 50 percent."

To Directly Access This Labor News Report, Go To: www.commondreams.org/news/2019/06/14/eye-popping-analysis-shows-top-1-gained-21-trillion-wealth-1989-while-bottom-half?utm_campaign=shareaholic&utm_medium=referral&utm_source=facebook&fbclid=IwAR1K2wA1iFCcomWZrmPa8YdW5fEsLm4vALqy36J5Hl5xONmX7CjCBuVHeZs