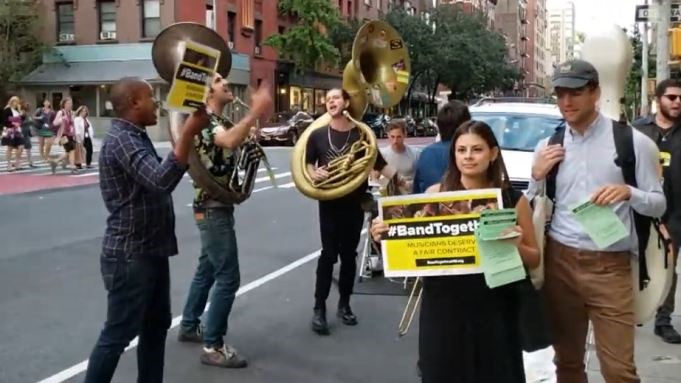 (NEW YORK CITY) - Demanding a fair contract, 25 chanting Members of the American Federation of Musicians held a rally - accompanied by a raucous brass band - outside the 92nd Street Y last week in New York City, where Disney Chairman and CEO Bob Iger was talking to Oprah Winfrey about his new book that touts his “decency-over-dollars” approach to business matters.

The Union said the Musicians, who chanted: “We enhance your visuals - Pay us fair residuals,” were “out in the street calling on Iger to put ‘decency-over-dollars’ into practice and pay Musicians fairly.”

The 80,000-Member Union’s current contract with management’s AMPTP is set to expire on November 14th.  Musicians have been negotiating a new contract with Disney and other major studios - including CBS, MGM, Paramount, NBC Universal, Sony and Warner Bros - for more than two years.  They haven’t met face-to-face since March, but are scheduled to return to the bargaining table on Monday (October 7th).

The main issue is residuals from films and TV shows made for streaming services.

Unlike Actors, Writers and Directors, Musicians don’t get them, although they do receive residual payments for secondary-market re-uses of theatrical and TV films.

“Every other group of Artists that work on Disney streaming projects ‘receives fair residuals,’” said Ray Mason, a Trombonist and Composer. “These residuals ‘are vital to the livelihoods of Freelance Musicians.’  ‘They allow us to maintain a basic income and do the creative work necessary of artists.’”

“I ‘can’t believe that Disney is making billions of dollars, but won’t even pay me fairly,’” said Violinist Adriana Molello. “Playing for weddings ‘actually pays better than working on a multi-million-dollar Disney project.’  ‘How can Bob Iger claim to value decency over dollars when the Musicians who score his films and television shows are struggling to pay the rent?’”

“Without streaming residuals,” the AFM said, “a Musician can take a ‘seventy-five-percent pay cut when a Disney film is released on Disney Plus versus in theaters or on network television.’”