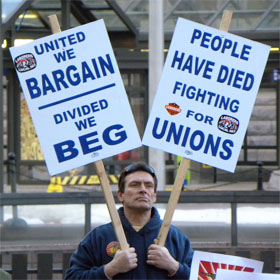 (WASHINGTON, D.C.) - By a 26-to21 party-line vote taken last week, the Democratic-run House Education and Labor Committee passed the Protect the Right to Organize (Pro) Act, the most-comprehensive Pro-Worker rewrite of U.S. Labor Law in decades.

The measure, co-written by top Lawmakers and Union Legislative Representatives, would restore many of the freedoms and protections Workers gained under the original National Labor Relations Act (NLRA) of 1935.

The PRO Act, HR2474, is also expected to pass the Democratic-run House, though the exact date for debate has not been set.

The Republican-run Senate is another matter.

And the crooked corporate contributors to Congressional Republicans can be expected to mount a large and expensive lobbying campaign against it, just as they spent millions of dollars a decade ago to stall the last Labor Law rewrite attempt - the Employee Free Choice Act.  That eventually fell victim to Democratic President Barack Obama’s inattention, lack of public commitment, and concentration on the Affordable Care Act.

The PRO Act would undo much of the damage the GOP-passed Taft-Hartley Act of 1947 and later court decisions, NLRB rulings, and other Republican-crafted legislation did to Worker Rights - while tilting the playing field for bosses.

It would also counter a key assumption of the NLRA: That bosses break Labor Law unintentionally, so penalties should be light - unlike other Civil Rights Laws.

But 84 years of experience shows that’s incorrect and the PRO Act recognizes that fact with high fines for Labor Law-breaking, including fines directed at CEOs and boards of directors, immediate restoration of illegally fired Workers to their jobs, and swift court injunctions.

And - the PRO Act would, among other moves, outlaw two big holes in the NLRA.

The GOP inserted one via Taft-Hartley: Legalizing State so-called Right-To-Work (for less) Laws.

Another change would drastically curb employer misclassification of Workers as “Independent Contractors,” depriving them of Worker Rights, including the right to organize.

Instead, Workers would automatically be considered “Employees,” with full Worker Rights, unless and until bosses could prove otherwise.

And, there wouldn’t be many loopholes left for bosses to do so.

“What is keeping” Workers from Unionizing “are ‘toothless’ Labor Laws, ‘aggressive’ employer ‘opposition’ to Unions, and ‘relentless political attacks that have dismantled’ Workers’ Right to organize,” Committee Chairman Bobby Scott (Democrat-Virginia) said.  “To ‘make matters worse,’ the National Labor Relations Board under the Trump Administration ‘has taken steps to permit’ employers to ‘gerrymander’ Union Elections, ‘misclassify’ employees as ‘Independent Contractors,’ and ‘punish’ Workers ‘for exercising their’ First Amendment Rights.  Meanwhile, the NLRB ‘proposed substantive rules that will roll back protections for Workers with joint employers and promote Decertification Elections.’  The PRO Act ‘would deter’ employers ‘from violating Workers’ rights to form Unions.’”

Meanwhile, United Steelworkers (USW) International President Thomas M. Conway called H.R. 2474 the “most comprehensive Labor Bill undertaken by Congress ‘in many years, designed to modernize the law and help level the playing field for Workers who want to exercise their rights to organize and bargain collectively.’”

"Despite ‘being more productive than ever, American Workers are further behind than they have been in generations,’" Conway said. "CEOs – ‘with the help of corporate lobbyists’ – ‘have been trying to hobble Unions for decades with Right-To-Work and other Anti-Worker Laws.’  Yet, organizing ‘remains the only viable means to rebuild a strong American Middle Class and ensure Workers receive an honest day's pay for an honest day's work.’  The PRO Act ‘will help restore the balance of power between employers and the employed and hopefully begin to address the epidemic problem of income inequality.’”

Conway said representatives from all political parties should line up to co-sponsor the PRO Act and rally their peers in support without delay, especially if they plan to solicit Union votes, volunteers or endorsements.

For More On This Labor News Story, Go To: www.peoplesworld.org/article/house-panel-passes-pro-act-pro-worker-labor-law-rewrite/?fbclid=IwAR3m2n7lBqCjY025bdIPD9Z0UWrgUJAkF_XhmYSgMAmIav_ti-quzs7qRCA and www.prnewswire.com/news-releases/usw-urges-congress-to-pass-pro-act-restore-rights-for-american-workers-300926195.html