A Preview Of The 2019 WNY Construction Career Days Event: Unionized Trades Ready To Welcome 1,200 Area High School Juniors & Seniors To Hands-On Introduction That They Hope Will Eventually Lead Many Into High-Paying Careers

For The 13th Time, Building Trades Reps Will Work To Create Interest In Young People Who May Not Be Set On College - Organizers Consider Expanding The Event In The Future In Order To Reach Students Even Younger & Their Parents 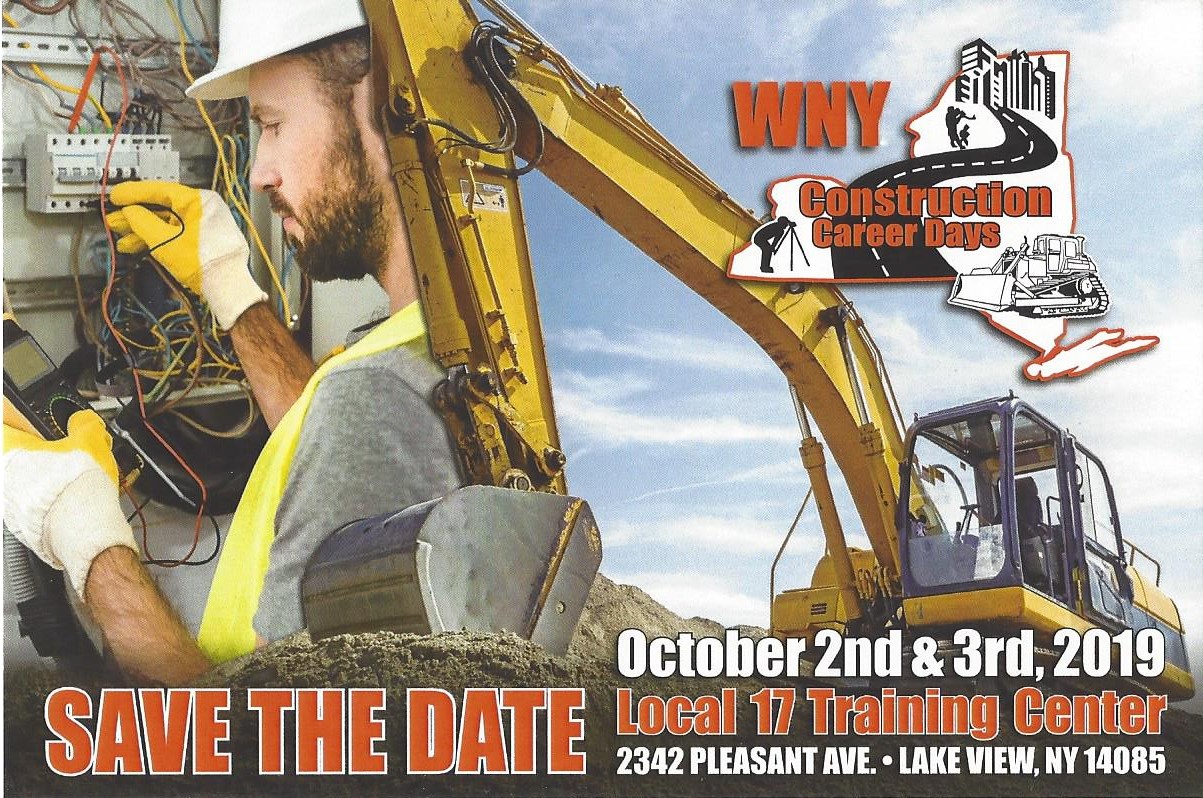 (LAKEVIEW, NEW YORK) – While 1,200 High School Juniors and Seniors are slated to visit the 2019 Western New York Western New York Construction Career Days Event over two days later this week at International Union of Operating Engineers’ (IUOE) Local 17’s sprawling 400-acre Training Center just south of Buffalo, Organizers who are seeking to replenish an industry with a variety of highly-skilled Trades Workers are talking about possibly expanding the event in the future to include even younger children and, possibly, parents who are not thinking about having their children consider pursuing a career in construction.

For the 13th time over the past 15 years (the Trades took a two-year break over the course of that time), young High School Men and Women will be introduced to a career in the Trades -  where after their Apprenticeship Training, a Journeyperson can make around $50 to $55 an hour and yearly in excess of $90,000.

All 18 Trades will be on site, offering students a variety of hands-on opportunities in order to show off and attract them to their craft, from supervised students running small excavators under the watchful eyes of Union Retirees to being propelled up scaffolding or elevated high above the ground while perched in a scissors lift to taking turns on virtual painting and welding offerings.

There will even be a major concrete pour for 150 feet of new sidewalk at the IUOE Training Center that the kids – who are traveling from 37 school districts and from as far away as Batavia and Brockport - will be able to participate in.

“There will be ‘a lot of equipment for them to try from each Trade’,” IUOE Local 17 Training Fund Administrative Manager James Smolinski, Jr. - who also serves as Co-Chair of the Construction Career Days Steering Committee - told WNYLaborToday.com. “And there will be ‘a lot of virtual work simulations offered, including a lot of new technology from the field.’” 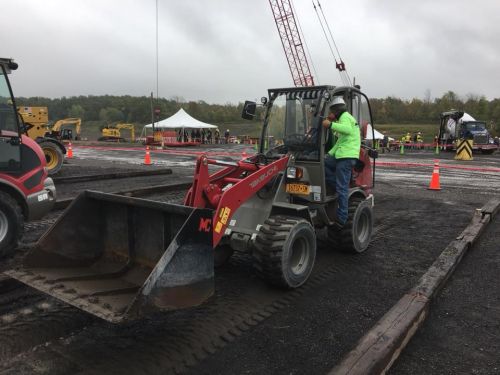 “We ‘pretty much got everything here,’” Gary Bernardo, who serves as Co-Chair of the Construction Career Days Steering Committee and is an Executive Board Member of Laborers Local 210, told Your On-Line Labor Newspaper.  “And in (the nearby IUOE Union Hall) we’ll have a number of vendors participating in our Trade Fair, from the New York State Department of Labor and Thruway Authority to Helmets to Hardhats (which helps transition Veterans into the Building Trades) to Alfred University, BOCES and the University of Buffalo.”

After 13 years, Smolinski and Bernardo both hope High School Students, their Guidance Counselors and their parents are “starting to get it” in terms of putting aside the stereotypes and really considering, pursuing and suggesting a life-long career in Unionized Construction.

“We’ve been doing this for thirteen years now and ‘it’s always about getting the word out,” Smolinski told Your On-Line Labor Newspaper, underscoring the point that it is a earn while you learn profession and one that does not carry college debt after an Apprentice graduates from the program and becomes a Journeyman.  “And, I think ‘all are starting to get the message.’”

“We’re ‘looking for smart people, young people who want to work - who have a work ethic,’” Smolinski continued.  “That’s why I think ‘it’s so important to get the (High School) Guidance Counselors and the kids’ parents to see what the Trades offer.’  If I get a call from a parent (who is interested in seeing what Construction Career Days is all about), ‘I personally invite them’ (to come out).  ‘No one is excluded.’  There are jobs ‘available and we need them to be trained and ready to go.’” 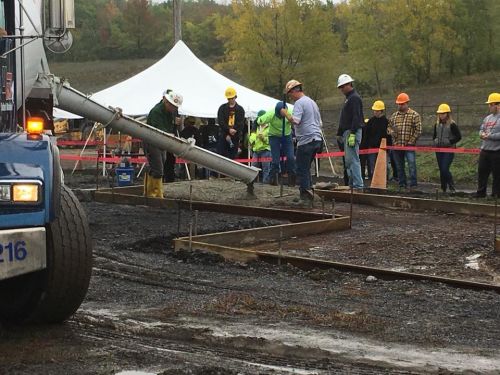 Bernardo voiced his disappointment that - over the years - the WNY Construction Career Days Event and the message of tremendous employment opportunities across the Unionized Trades “have not gotten” the public exposure that he believes both deserve.

“Where ‘else can (a young person) go to see what a jobsite looks like?’  ‘It’s important, but we still find a way to fill the event - which is pretty amazing to me,’” he said.  “The ‘biggest thing is the average age (of an experience Tradesman or Tradeswoman) is (47 to 48).’  ‘So we’re starting to lose our Baby Boomers.’  ‘They’re looking to get out (retire).’  ‘So, where are you going to get people (to fill their positions)?’  ‘There’s a lot of work out there.’  ‘How do people think roads and bridges and building are going to get built?’”

The WNY Construction Career Days Event has also found a friend in the Workforce Development Institute, a Statewide Non-Profit that uses its expertise to fund projects that build skills and also strengthen employers’ ability to hire and promote Workers.  For three years now, the WDI has provided the Construction Career Days Group with $20,000, which Bernardo says, quite frankly, has helped the group “fill in the gap” required to make it happen. 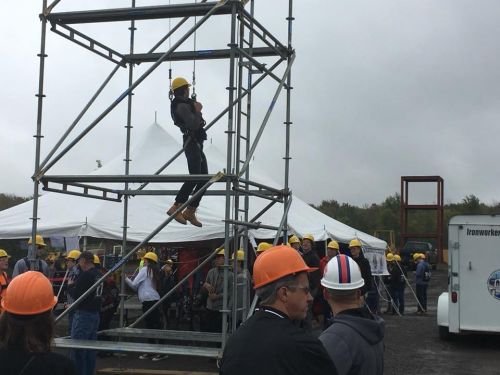 “A ‘big part of this event is the dedication’ of the Trades (to continue to put it on, year after year),” CIEA Executive Vice President James Logan said.  “Without them, ‘this does not happen, but it’s up to us to continue to get the word out (to young people interested in construction).’  While we’ve talked to (the students) and ‘explained’ the opportunities, ‘we really haven’t seen a payoff’ (in terms of more young people going into the Trades).  ‘There just aren’t enough kids coming forward, many who could make this a good life-long career.’”

“And, ‘unfortunately, I don’t think their parents really understand the career opportunities,’” Logan told WNYLaborToday.com.  “They’re ‘still looking at sending their kids to college.’  The schools themselves ‘are ranked, based upon who many of their graduates are going to college.’  ‘It’s the system and Guidance Counselors are pushing them more towards college.’”

Smolinski is “proud” of not only the longevity of the WNY Construction Career Days Event and what it offers, but “proud” that his Union - IUOE Local 17 - has continued to host it at its impressive Training Center in Lakeview, just south of the City of Buffalo.

“Definitely,” he answered “We ‘want to do it and we are proud to have it here, but we need to start looking into the future in order to keep it going.’  ‘A lot of people are starting to talk of possibly doing a third day for seventh and eighth graders in order to open it up to even younger kids.’”

Added Logan: “That’s ‘important to do.’  ‘We need to get into the elementary schools and junior high schools.’  ‘We haven’t figured it out how to do that yet – maybe smaller (career days) events so the kids who take part go home and start talking about it with their parents.’”

Wednesday and Thursday “will be a madhouse,” admits Logan, “but it ‘gives us all an opportunity to make them aware of a legit career.’  ‘There is money to be made here.’”

“We’re ‘thrilled to be able to continue this event after thinking it would have lost some steam after we took a two-year break,’” Bernardo said, “so we ‘continue on.’”