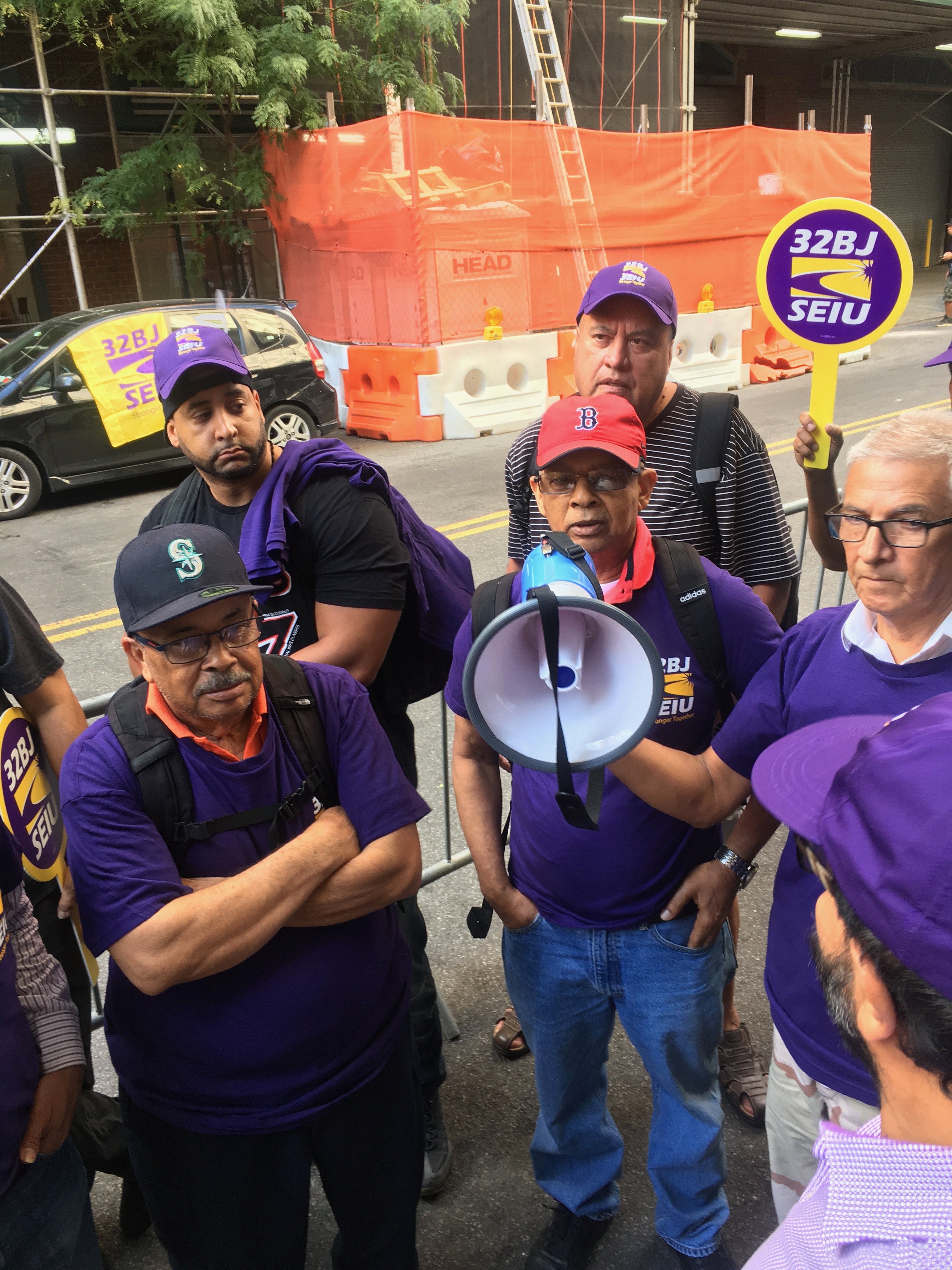 (NEW YORK CITY) - Building Service Workers tasked with keeping Con Edison offices safe and orderly are living lives of quiet desperation, struggling without health insurance, the ability to claim sick days - and, in many cases, earning minimum wage salaries despite being on the job for more than a decade. And Con Ed’s response?  Not our problem.

This past Spring, the ongoing plight of some 2,000 Janitors and Security Officers working at privately-owned utility companies - including Con Edison, moved both the New York State Assembly and Senate to pass legislation calling for the Workers to be paid the Prevailing Wage.

But that legislation is now sitting on Governor Andrew Cuomo’s desk awaiting his signature.

“We ‘need to fight for this bill,’” Niou told a vociferous crowd of about 50 32BJ purple-clad demonstrators rallying on the corner of Irving Place and East 14th Street. “Fair wages ‘result in an increased quality of life for Public Utility Workers.’  ‘Providing a fair wage also helps companies who will see less turnover and increased Worker satisfaction, productivity and efficiency.’”

32BJ, the largest Property Services Union in the U.S. with more than 175,000 Members in 11 states, strongly supports the bill, arguing that as a monopoly, “Con Edison has refused to reciprocate the public support it receives and has allowed its contractors to pay workers the Minimum Wage, with few, if any benefits.”

“Con Edison ‘is a monopoly that operates on city property and they have to do better when they’re using their subcontractor Nelson and Imperial,’” City Council Member Ben Kallos (Democrat-5th District) said at the rally. “They ‘can’t pay just Minimum Wage, they can’t ignore health benefits.’”

But Con Ed doesn’t see it that way.

When asked why Con Ed doesn’t already pay Building Cleaners and Security Officers Prevailing Wages and benefits, Phil O’Brien, Con Ed’s Assistant Director of Media Relations, curtly told LaborPress: “This ‘is a matter between the Workers and their employer.’”

Building Services Worker Carlos Ramirez said that he must work overtime or a second job just to scrape by, and that he hopes with the “Constitution and democracy in this country, we can have a living wage that allows ups to live with dignity.”

When asked about the status of the bill, the Governor’s Office said it is under review, but did not indicate when action might be forthcoming.

To Read This Labor News Story In Its Entirety, Go To: http://laborpress.org/cuomo-urged-to-sign-bill-aimed-at-lifting-up-con-ed-cleaners/