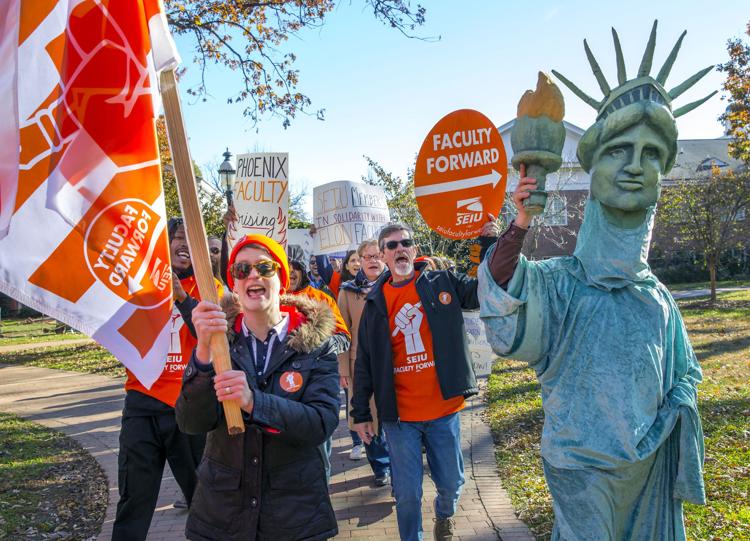 (ELON, NORTH CAROLINA) - Adjunct Faculty at Elon University have won another victory in their bid to form a Union, but the university said it will appeal this decision.

The top official with the National Labor Relations Board (NLRB) regional office in Atlanta ruled in favor of Elon’s Adjunct Faculty.

“We have been ready for this moment since last spring when we voted to Unionize,” Sarah Bloesch, an Adjunct Assistant Professor of Religious Studies, said in a statement released by Elon Faculty Forward, the Elon Union Organizing Group.  “Our collective situation of precarity has not changed, our dedication to our students has not changed and our commitment to getting to the bargaining table to negotiate a fair contract has not changed.”

Adjunct Faculty at Elon - Full-Time and Part-Time Instructors who aren’t tenured or aren’t on track to get tenure - announced last Fall they intended to form a Union to seek better pay, job security and other benefits.

Elon’s Adjuncts want to become the second group of Unionized Faculty in North Carolina after Duke’s adjuncts created a Union in 2016.

In March, 62% of the 180 Elon Adjuncts who cast valid ballots voted in favor of Unionizing.

They said they will be represented by the Service Employees International Union (SEIU), which says its Members include about 54,000 faculty at 60 Public and Private U.S. colleges and universities through its Faculty Forward effort.

Elon University appealed the outcome of the March vote and the university will ask the National NLRB office in Washington, D.C. to review this latest ruling.

In a statement, meanwhile, Elon Faculty Forward “calls on the Elon Administration to stop appealing and respect democracy by starting to bargain with the Adjunct Faculty.”

To Read This Labor News Story In Its Entirety, Go To: www.greensboro.com/news/education/elon-s-adjuncts-win-another-union-victory-but-the-university/article_de56aa92-440d-5808-9dde-6f38c3ca7db1.html?fbclid=IwAR3kV3wfNtolDVPcZEMgPxBBM254HoPvVGfWk3JdSPxZni-xihc2r-01_T0