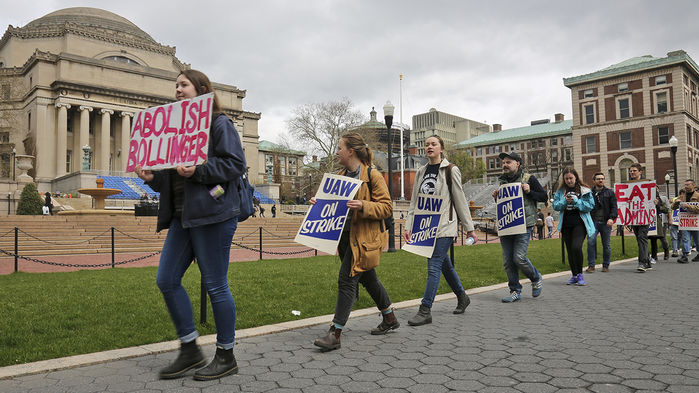 (WASHINGTON, D.C.) - Graduate Students are not “Employees” with a right to Unionize, according to a rule proposed by the National Labor Relations Board (NLRB), an agency that’s tasked with enforcing U.S. Labor Laws.

If implemented, the rule would undercut a recent wave of Grad Student Unionization Efforts at private U.S. universities.

The NLRB will be accepting public comment on the announcement for 60 days.

The NLRB has traditionally made these kinds of decisions on a case-by-case basis - not through rulemaking - notes Risa Lieberwitz, a Professor of Labor and Employment Law at Cornell University and General Counsel for the American Association of University Professors.

“This current NLRB has a strong majority of very Conservative Board Members.  (It’s) shown itself to be extremely political and quite focused on overruling precedent that had expanded Employee Rights to Unionize,” Lieberwitz said.

In 2016, the NLRB decided that Students at Columbia University who receive compensation for teaching and research could be considered Employees with a right to Unionize.

Prior to that though, in 2004, the NLRB ruled Students at Brown University did not have the right to Unionize - overturning a 2000 ruling that Grad Students at New York University (NYU) could Unionize.

The back and forth is because NLRB Members are appointed by the Presidential Administration.

Pro-Union decisions were made under Democratic Presidents Bill Clinton and Barack Obama.

The Anti-Union Brown decision was made under Republican President George W. Bush.

The crux of the argument boils down to whether the teaching and research that Graduate Students undertake is a form of training that is part of their education - or if they are “working” for their universities and therefore qualified to be considered Employees.

In an Amicus Brief filed ahead of the Columbia decision, nine of the Nation’s most prestigious universities argued “Graduate Assistants are Students whose relationship with the university is primarily academic, not economic.”

But in that case, Lieberwitz says, the NLRB ultimately ruled “that you can be both an Employee and a Student that that kind of dual status can coexist.”

The NLRB doesn't have jurisdiction over public universities, where Grad Students are widely recognized to be Workers who are permitted to form Unions in states that allow collective bargaining by State Employees.

To Continue Reading This Labor News Story, Go To: www.sciencemag.org/careers/2019/09/grad-student-unions-dealt-blow-proposed-new-rule-says-students-aren-t-employees?fbclid=IwAR2nXr6TDZT1SKq4N65XfNmtKyANSs0gW9BKuNLfFmVXEPhnZfM7_1bMMKE