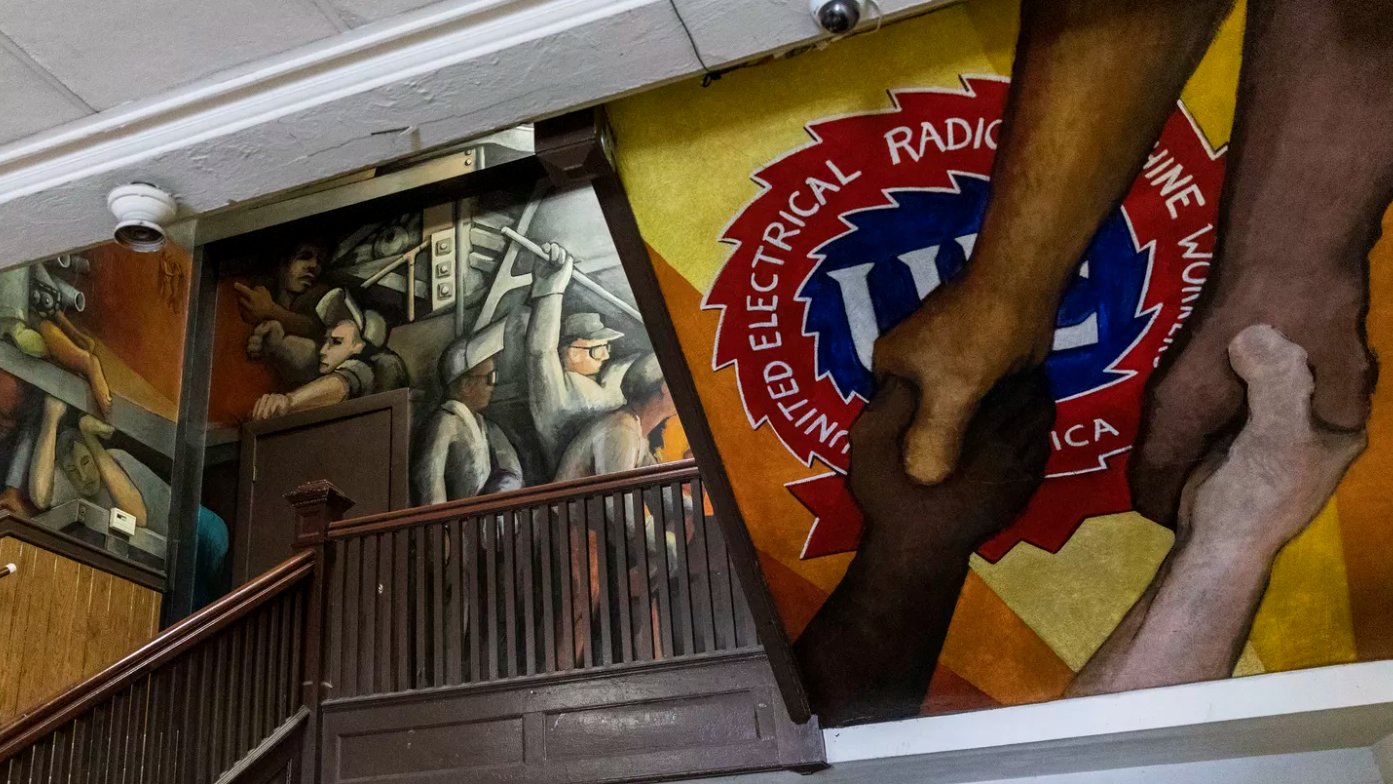 (CHICAGO, ILLINOIS) - Anyone driving on Ashland Avenue near Monroe Street in the City of Chicago has likely seen the colorful mural on the side of the United Electrical (UE) Workers union hall.  Completed in 1999 by Mexican artist Daniel Manrique, it shows people joining hands in solidarity and celebrates international unity among Workers.  Less well-known because it’s out of public view is the two-story mural inside, completed in 1974, that climbs the hall’s main staircase, immersing anyone who walks through it in the history of the Union.

The walls of the “Solidarity” mural - which will be part of the Chicago Architecture Center’s annual and public Open House Chicago tour, runs from October 19th through October 20th - are plastered with brightly colored scenes of Workers’ struggles and triumphs.

Hands of different races clasp together, a cartoonish boss is forced to sign a contract with Workers and Union Leaders hand leaflets to Factory Workers.

The second-floor landing portrays a Southern Sheriff, a Ku Klux Klan member, an industrialist, a general and National Guard members suppressing the Workers below them.

Murals have long told stories of the Labor Movement.

Larry Spivack, who serves as President of the Illinois Labor History Society, says this one “captures the essence” of Labor Activists in ways history books can’t always do, helping those who view it connect with the stories.

“The mural ‘is an exciting, beautiful way of telling the history,’” Spivack says, “a ‘lesson for all of us who are interested in a better quality of life, a better society, one that has less wage inequality and less racial division.’”

When Artists John Pitman Weber and Jose Guerrero, who were determined to make the inside of the UE Hall their canvas, first approached the UE in 1973, the building and the Union both had seen better days.

Weber, a Muralist, and Guerrero, a self-taught cartoonist, had been introduced by friends and decided to collaborate on a mural about Labor and Workers.

Guerrero, who died in 2015, was a Factory Worker at the old Sunbeam Appliance Company Plant on the West Side and Weber was born into a family of Radical Activists.

Weber, who in 1970 co-founded the group now known as the Chicago Public Art Group with William Walker, says the UE seemed a perfect fit because its ideals of a progressive and militant tradition aligned with his and Guerrero’s vision.

“The building was ‘old and had these difficulties, and that didn’t frighten us at all,’” Weber says. “We were ‘viewing this as an opportunity to identify with one of the few Unions that was still carrying a radical tradition.’”

Weber, 77, says that tradition might have been one reason the Union was so open to the Artist.

Another: They were willing to work for nothing.

To Continue Reading This Labor News Story, Go To: https://chicago.suntimes.com/murals-mosaics/2019/8/30/20826871/united-electrical-workers-union-mural-john-pitman-weber-jose-guerrero-ashland-avenue-near-west-side?fbclid=IwAR385TWLhL2jc71NI0FOg2e8PKcMCixm8kVHoVhP6FAe1NaUzjhtJFpQztYo