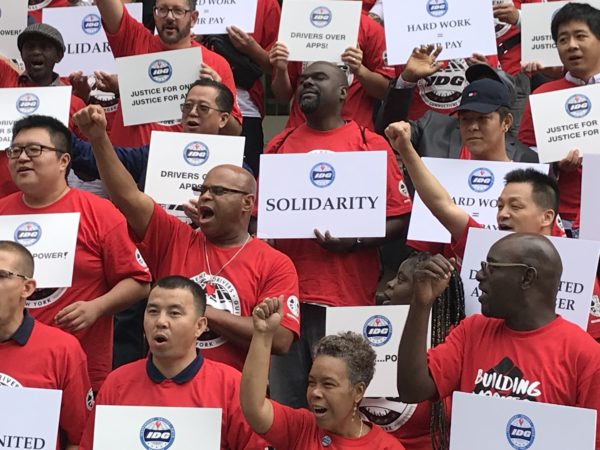 Speaking to reporters and about 100 Drivers earlier this week at a rally in front of City Hall, Sexton said that Drivers’ earnings after expenses had failed to reach the $17-an-hour Minimum Wage that went into effect in February, and that the City’s cap on the number of for-hire-vehicle licenses was creating “another failed medallion system” that “exacerbated predatory lending.”

With a City Council Transportation Committee hearing on the effects of those laws held this week, the IDG called for a “Drivers’ Bill of Rights” that would include: Enforcing the Minimum Wage; Preventing app-based taxi companies from deactivating Drivers without due process; Regulating “predatory leasing;” Letting owners have rooftop ads on their vehicles; Various safety regulations; and Restoring “destination filters,” which enable a Driver to select fares going in a direction they want.

The TLC disputes the IDG’s claims that average wages for App-Based Drivers have gone up by only $6,000 a year, short of the $10,000 needed to reach the new Minimum Wage.

Acting Commissioner William Heinzen told the Council that while they wouldn’t have a precise annual figure until the law had been in effect for a year, its data from the first five months showed Drivers on track to take home at least $9,000 more.

The IDG is also advocating repealing the cap on licenses for new app-based cabs and replacing it with limits on the number of Drivers.

That cap, Sexton told the Council, “incentivizes a return to yellow-taxi-like twelve-hour shifts,” and that with 12,000 new Drivers issued licenses in the past year, there are now 187,000 FHV-Licensed Drivers, more than 60,000 above the number of licensed vehicles.

“We have seen the rapid growth in the FHV sector have a negative economic impact on all Drivers as their incomes have fallen due to the increased competition for passengers,” Council Transportation Committee chair Ydanis Rodriguez (Democrat-Manhattan) said at the hearing.

The vehicle cap was supposed to ease traffic congestion, Driver Aziz Bah told the rally, but the result has been that new Drivers go to leasing companies, and have to work 14 to 18 hours a day.

Sexton said the best way to limit congestion and excessive competition was by creating a “pathway for Drivers to own their own vehicles.”

To Continue Reading This Labor News Story, Go To: http://laborpress.org/idg-urges-ending-caps-on-app-based-cabs-abolishing-tlc/