âNow This Is Cool:â Washington, D.C.âs Newest & Tallest Mural Honors A Local Jazz Legend Who Was Also A Union-Represented Mailman 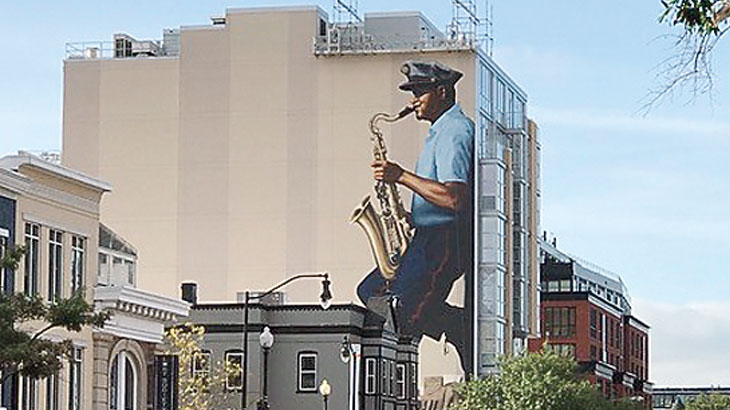 (WASHINGTON, D.C.) - A man in a U.S. Postal Service uniform leans against a brick wall at 14th and U Streets NW.  He’s playing a tenor saxophone, with his mailbag resting at his feet. He’s also nine stories tall.

The 70-foot-tall mural of Buck Hill is D.C.’s newest and tallest outdoor portrait.

Hill was a native and lifelong Washingtonian who died in 2017 at the age of 90.

He began performing in jazz clubs along the U Street Corridor in the 1940s when the area was known as “Black Broadway.”

He played with jazz greats like Dizzy Gillespie and Miles Davis, but passed up offers to perform in other cities and countries in favor of staying close to home.

Hill also spent more than 40 years as a Mail Carrier with the Postal Service and his dedication to his dual careers earned him the nickname “the Wailin’ Mailman.”

Fittingly, the mural of Hill is kitty-corner to the U.S. Post Office in the Reeves Municipal Center.

It’s one of six new murals by MuralsDC, which is funded by the D.C. Department of Public Works and works with the Commission on the Arts and Humanities.

The painting of Hill presides over one of the city’s most culturally rich neighborhoods, as well as one of its most gentrified.

The city brought in Tucson-based Artist Joe Pagac for the project.  He’s painted two MuralsDC projects before, and he worked with local historians and the city to come up with the design.

“I’m just really thankful to have been able to be a part of commemorating Buck in a neighborhood that was, you know, one that he really loved so much,” Pagac said at the dedication.

He also thanked his wife, Arielle Pagac-Alelunas, who helped him operate the scaffolding.

“She had to get over her fear of heights,” he said.

To Directly Access This Labor News Story, Go To: https://wamu.org/story/19/08/27/d-c-s-newest-and-tallest-mural-honors-a-local-jazz-legend-who-was-also-a-mailman/