Bricklayers Local 3s Labor Of Love Goes Above And Beyond, Union Donates More Than 300 Man Hours To Install Nearly 16,000 Bricks To Complete A Unique Veterans Tribute In The Western New York Town Of North Collins 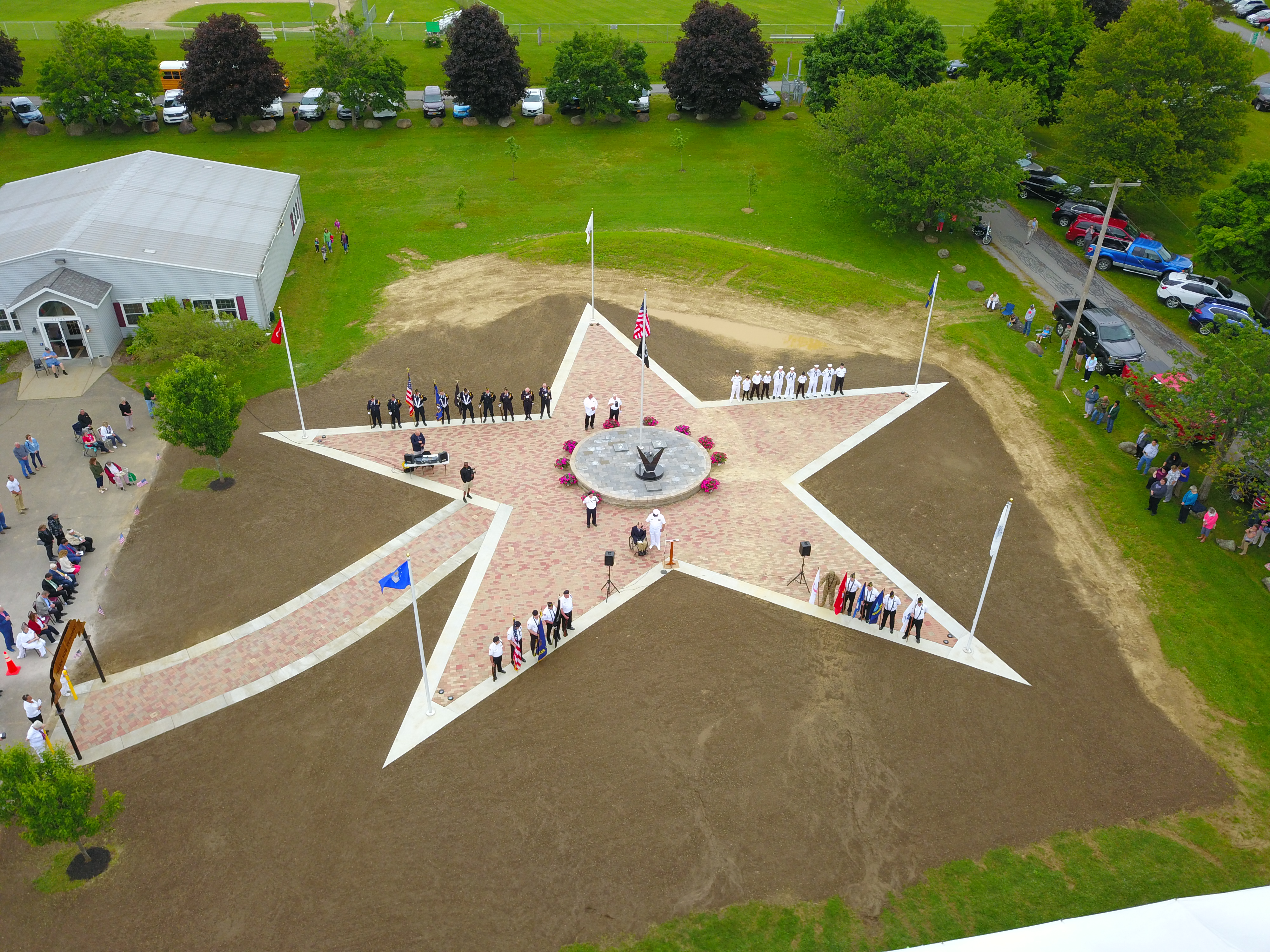 (NORTH COLLINS, NEW YORK) – When Jim Lint walked into Bricklayers Local 3’s Buffalo Union Hall back in the Fall of 2017 to ask for a small monetary donation to help fund a five-starred Veterans Tribute that he was working to get built in the Town of North Collins, he never thought the Union and its Leadership would instead make an on-the-spot decision to donate what turned out to be more than 300 hours of their time to lay down nearly 16,000 bricks on the unique project.

Formally unveiled this past June and just 21 miles south of Buffalo in Erie County, the impressive Route 62 tribute, which is located on recently-renamed Veterans Memorial Highway, is outlined in the shape of a 100-foot-wide by 100-foot-long five-pointed star - which represents the branches of the Armed Services: the Air Force, Army, Coast Guard, Marine Corps and Navy.

The center features a granite circle that is 20 feet in diameter and 18 inches high where the American, MIA and POW Flags are flown in honor of those who served.  In that polished granite monument is a pair of granite hands holding up a granite bowl that contains an eternal flame.  The monument was constructed in the shape of the letter V - for victory. 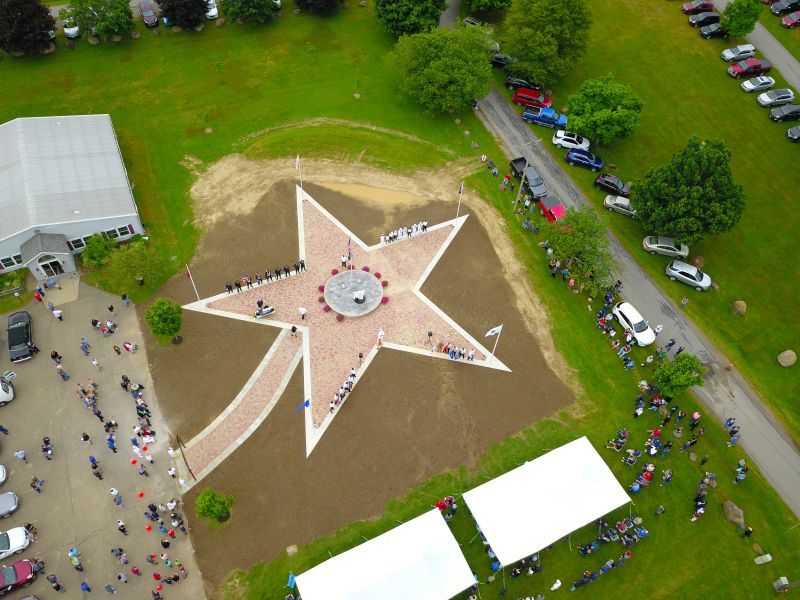 “When I went in to see (the Bricklayers), ‘I was hoping they would agree to take’ a ($500) brick (with the Union’s name inscribed on it),” said Lint, who serves as President of the North Collins Veterans’ Tribute Organization and who, for the past five years, had led the project through, from beginning to end.  “They ‘left the room to discuss it, and when they came back in they said they would do the work for free.’  It’s a ‘big’ donation because there are nearly (16,000) bricks out there and I figure it would have cost us ($150,000) to have that work done.”

“(Bricklayers Local 3) ‘did an excellent job for us and that’s been the reaction of the Veterans who come to see the tribute,’” Lint also told WNYLaborToday.com. “I ‘don’t think there is anything like this anywhere across the country.’”

Bricklayers Local 3 Business Manager Rick Williamson (Pictured Above on the Left) and Vice President Frank Pietrowski (On the Left/WNYLaborToday.com Photo) led a small team of several of the Local’s Members who donated their time to help build the tribute. 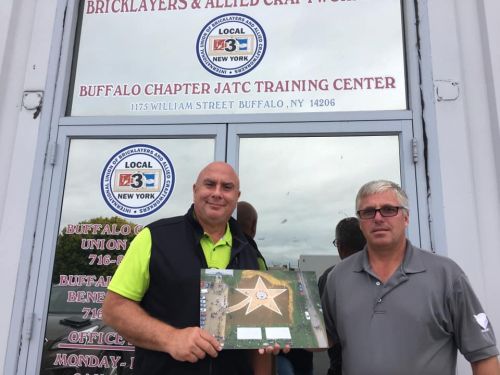 “It was a ‘good cause, especially when it comes to our Veterans, and it was something we were capable of doing,’” Williamson told Your On-Line Labor Newspaper. 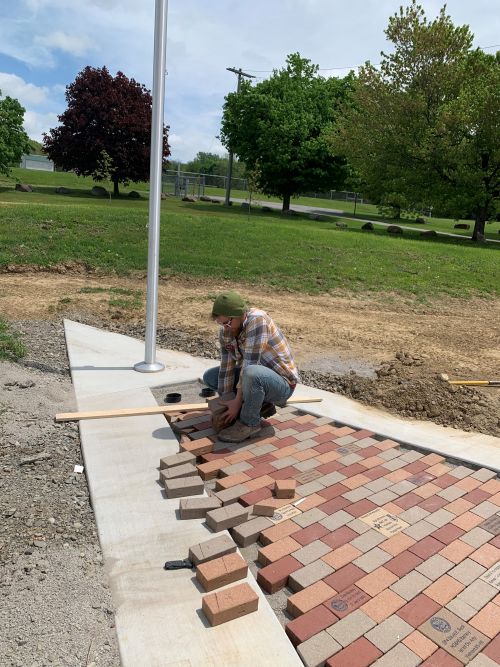 Added Pietrowski: “It was ‘good to give back and be a part of it.’  Our Members ‘stepped up and helped out.’” 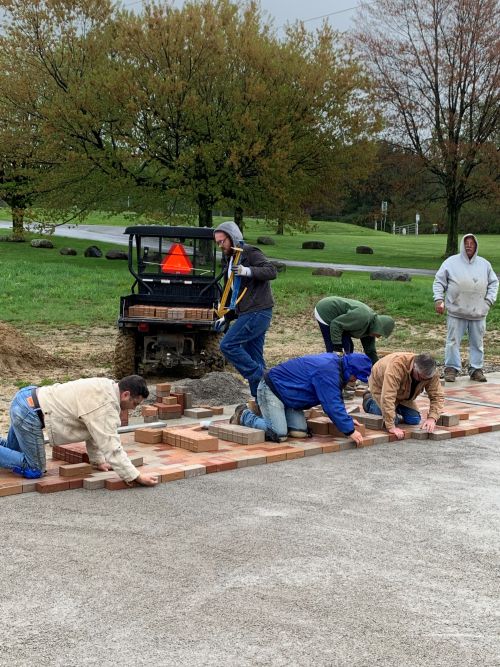 When Lint first contacted the Bricklayers Union, Williamson said he was also “looking for direction” in getting the project built.

“It was a sizable project and he asked us ‘how he could get it done, if we knew (contractors) that could do it,’” Williamson said.

Added Pietrowski: “They ‘came in blind and we helped guide them through the process.’” 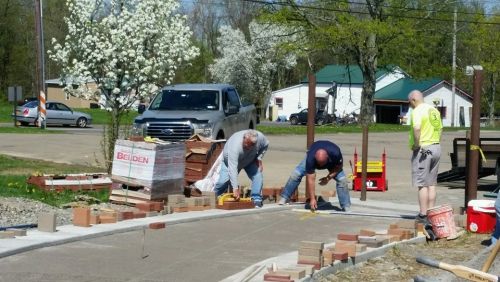 The Union couldn’t make the decision to donate their Members’ time during the Summer due to the fact the construction season was in full bore, added Williamson, whose Local represents 350 highly-skilled-and-trained Union Tradespeople across the region.

So in the off-season, Williamson, Pietrowski and the rest of the Bricklayers’ team made their way to North Collins 13 different times – putting in four to seven hours during each visit - to lay the bricks into the ground. 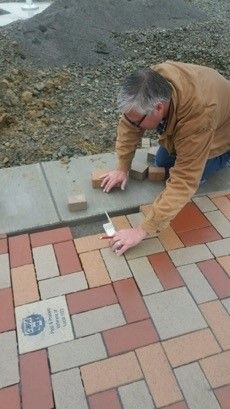 In the end, both Local 3 Representatives estimated the amount of time to be about 300 man hours with the Members working “even in the rain.”

In the end, Williamson and Pietrowski, said the Bricklayers installed well over 15,000 bricks.

“When you walk around and ‘see so many (bricks) - you think about how much history (is there).’  And, people ‘have been appreciative’ (of the Bricklayers’ donation),” Williamson said.

“The feedback we’ve gotten is that the Members of our Local ‘love it,’” Pietrowski said. 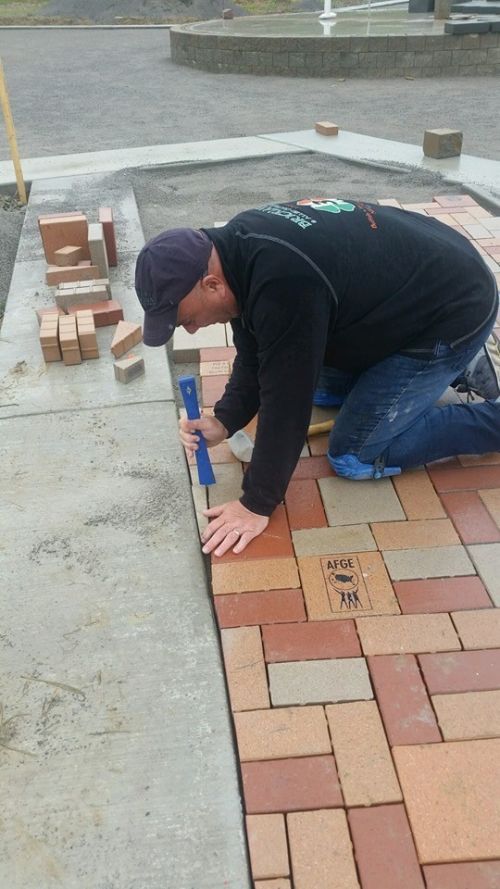 Lint, who served in the Air Force -including several years of active duty in the 70s, was also a Member of the United Steelworkers (USW) for eight years while he was employed at a Republic Steel Plant in Massillon, Ohio.

In a letter sent to the Union by the North Collins Veterans’ Tribute, Lint wrote, in part: The Board of Directors and I would like to Thank You all for the time and effort that have put into our Veterans Tribute.  Without the work that you all have done, we would probably not have been able to complete this incredible project for years to come.  There are really very few words to tell you of our gratitude. That also includes the gratitude of the Veterans, their families and our community.

Lint told WNYLaborToday.com of the Bricklayers’ donation: “You can ‘think what you want about Unions, but let me tell you something - when you need them, they are there for you.’  ‘And it shows that people still care about people.’” 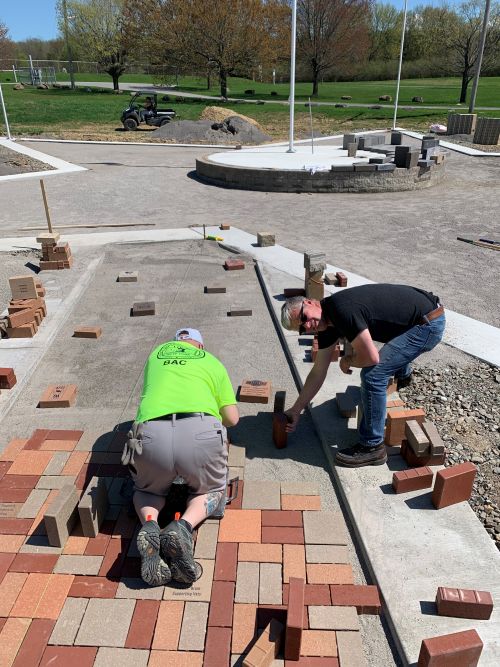 Many other Unions have also helped out, from the American Federation of Government Employees (AFGE) to the Communications Workers of America (CWA), by purchasing bricks at the Veterans Tribute and having their Union’s name inscribed on them.

Lint took the lead on the project and designed the tribute after getting approval from the Town Board five years ago.  American Legion Post 1640, of which Lint is a Member, was also heavily involved in the Veterans Tribute Project.

He tells WNYLaborToday.com that people from across the United States have stopped to see and tour the site, some from as far away as Houston, Texas after learning about it on the Internet.

“We ‘have more than’ (600) of the bricks inscribed with names and messages people have chosen,” said Lint, who told Legion Town Magazine: “We fought for a better life and if it wasn’t for (the Veterans), we wouldn’t have that.” 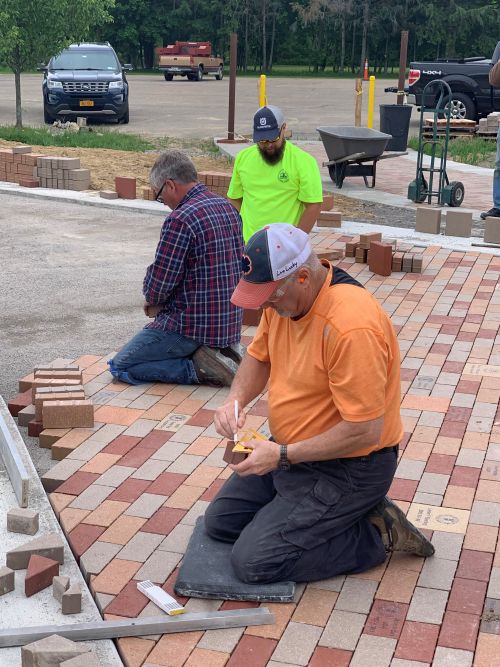 In addition to the five-pointed star, there’s a brick walkway - which looks like the tail of a shooting star - that was built which leads into its design.

Looking at the Veterans Tribute from the air, it all melds into the mission statement of the North Collins Veterans Tribute: To have a peaceful site to recognize and honor those who have served and those who continue to serve this great Nation, which promotes freedom and Democracy.

You Can Also Access Legion Town’s Story At: www.legiontown.org/memorials/5893/north-collins-ny-american-legion-post-1640-and-bricklayers-local-3-ny-create-north.