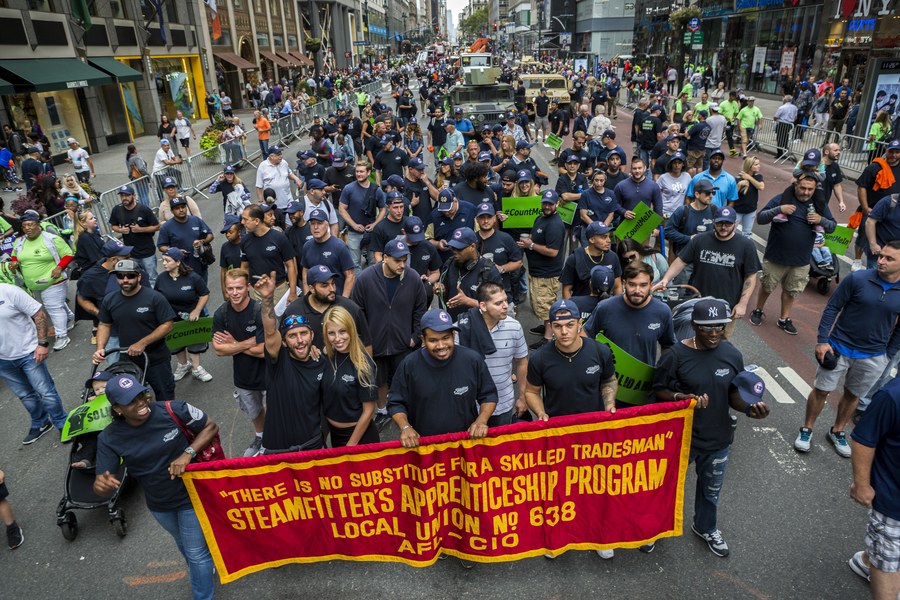 (NEW YORK CITY) - What’s most important for the American Labor Movement going into 2020?  Among 10 Union Leaders who spoke to LaborPress at New York City’s annual Labor Day parade on Saturday (September 7th), the three common themes were solidarity, turning back attacks on Workers, and convincing people of the value of Unions.

“Unions as a group need to stand together,” says Randi DiAntonio, the Vice President of the Professional Employees Federation (PEF) here in New York State.

Sara Nelson, who heads the Association of Flight Attendants (AFA), says the Labor Movement needs to work hard to break down “massive, growing inequality,” “the racist, sexist divisions that management has put between us,” and the attitude that “if my neighbor has a good Union job, to pull them down.”

The Republican Trump Administration is “attacking everything we stand for, from the National Labor Relations Board on down,” says Tony Speelman, the President of United Food and Commercial Workers (UFCW) Local 1500, which represents Supermarket Workers.

“There has never been a greater need to support the Middle Class and Working Class,” says John J. Murphy, a Representative of the United Association of Plumbers, who sees a “resurgence of the American Worker, citing polls that show rising public support for Unions.

For 1199 Service Employees International Union (SEIU), “organizing the unorganized” is the way to build the power needed to win economic justice, said Secretary-Treasurer Maria Castaneda.  Repealing “all the laws that are preventing Workers from organizing” would help that, she added.

An important step, said Teamsters District Council 16 Head George Miranda, would be for Congress to repeal the Federal Law that lets states enact Right-To-Work (for less) Laws that ban the Union Shop.

Shaun D. Francois, the President of American Federation of State, County & Municipal Employees (AFSCME) Local 372 - which represents City School Para-Professionals, Lunch Workers and other Support Staff, noted that those laws, like the Supreme Court’s 2018 Janus decision, are based on the attitude that Unions shouldn’t force Employees to pay dues, but expecting a Union to run without dues is like expecting the government to function without taxes.

Before their landmark 1970 Strike, she added, Postal Workers had as few rights as Walmart Workers do today.  They were “At Will” Employees who could be fired at any time without any reason.

For New York’s Building Trades, a top concern is “the encroachment of Non-Union developers,” said Mike McGuire, the Political Director of the Mason Tenders District Council.

To Continue Reading This Labor News Story, Go To: http://laborpress.org/union-leaders-talk-solidarity-worker-rights-and-more-at-annual-labor-day-parade/