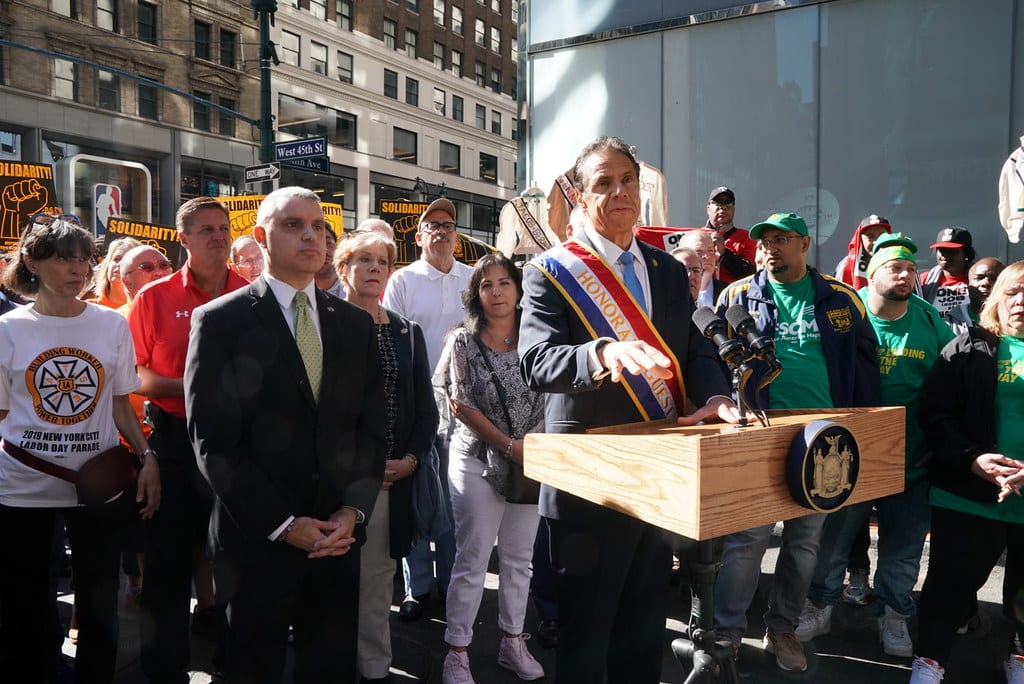 (NEW YORK CITY) – On Saturday (September 7th), Governor Andrew Cuomo announced his plan to put the New York Buy American Act - which is set to expire in 2020 - permanently on the books, touting it as “some of the most progressive Pro-Worker, Pro-Labor, Pro-Middle Class initiatives and reforms in the United States - period."

He also took a veiled swipe at the Trump Administration’s economic strategy.

“What we’ve shown is that we can protect Workers, advance Workers and grow the economy,” Cuomo said during the annual New York City Labor Day Parade in Manhattan. “This has been a false choice that Washington offers - that if you do these Pro-Worker Reforms, you’re going to slow the economy.  No, no, no.  An economy that works for the Worker is the strongest economy and that’s’ what we show here in New York.”

Cuomo first announced the New York Buy American Act in January 2017 and the law was signed the following December.  It requires all State road and bridge projects costing more than $1 million to use American-made structural steel and iron.

In a statement, the Governor said making the law a permanent policy would be “at the top of the list" for next year’s budget priorities.

“What Buy America says is the steel that we buy and the iron we buy must be American made. That does two things: it protects and grows New York jobs and it makes sure that we have the best quality steel and iron going into our infrastructure projects," he said.

“No State is building what we are building here, over ($250 billion) in infrastructure, and we want to make sure these projects last one hundred years,” Cuomo said at the Labor Day Parade. "To do that you have to know that steel, that concrete, that iron, is top quality material and you only know that if that is made right here in the good ‘ol USA.”

To Directly Access This Labor News Story, Go To: www.nydailynews.com/news/national/ny-cuomo-permanent-buy-american-law-20190907-ard6k2zikfhinkl7p52ci6gyta-story.html