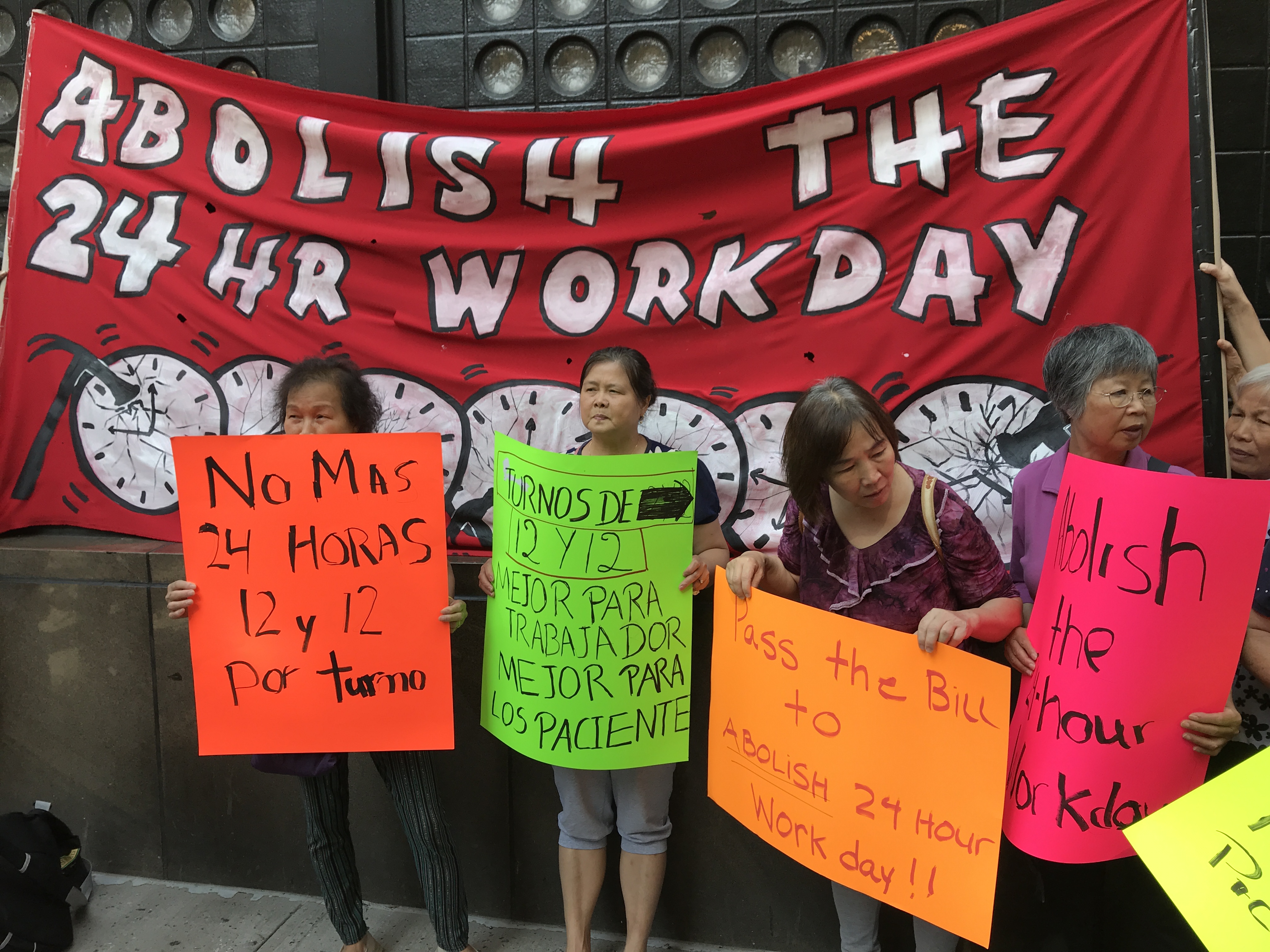 It’s intended to supersede a State Department of Labor regulation that Home Care Aides get paid for only 13 hours of a 24-hour shift, on the grounds that they’re off, either eating or sleeping, for the other 11 hours.

The Aides, arguing they rarely get even five hours of uninterrupted sleep because they have to take care of their patients every couple of hours, won several State Court decisions that they should get paid for the full 24 hours - but the State Court of Appeals overruled them last March, holding that the Labor Department had made a rational determination that “a patient may need an aide on site around-the-clock without requiring adult care services for all twenty-four hours of the day.”

“24 hours is ‘inhumane,’” Persaud told the crowd gathered at the site of the 1911 Triangle Shirtwaist fire. “No one ‘should be working twenty-four hours without a break.’”

He told LaborPress afterwards that it would probably cost the State about $1 billion a year to reimburse home care agencies for the costs of paying two Workers for 12-hour shifts, but that the current situation is “a billion dollars taken out of the backs of Workers.”

About 8% of New York State’s 240,000 Home Care Workers perform 24-hour shifts, according to the Ain’t I A Woman? Coalition, which organized the rally.

It’s been a hard road for Home Health Aides seeking justice in their workplaces.

Home Care Aides said those shifts take a toll on their own health and impair their ability to care for patients.

“I ‘love’ this work, ‘but it cost me a lot.’  It ‘robbed me of my family, it robbed me of my health,’” Sileni Martinez, a Dominican Immigrant who did 24-hour shifts five or six days a week for most of her 27 years on the job, said in Spanish. “¡No más veinticuatro, no más abuso!”

Mei Kum Chu, a Chinese Immigrant who began working in home care when the Chinatown Garment Industry collapsed after 9/11, said there was “no way” she could get rest regularly while doing 24-hour shifts.

She eventually fell and tore a tendon in her hand during a 24-hour shift.

“This is a ‘Women’s issue first and foremost,’” said Sonia Ossorio, who heads the National Organization for Women’s New York City Chapter. “This is a ‘Workers’ Rights abuse that must be stopped.’”

“We ‘don’t want this twenty-four-hour workday spreading to Western New York,’” Mary Lister, a Home-Care Aide from Buffalo who spoke at the rally, told LaborPress.

But in Buffalo, she said, most Home Care Workers have the opposite problem, trying to piece together a living out of scattered five- and eight-hour shifts.

There is only one agency she knows of that hires Workers for 24-hour shifts.

To Continue Reading This Labor News Story, Go To: http://laborpress.org/health-aides-hail-bill-to-ban-24-hour-shifts/