Labor Perspective From Chicago-Area Writer John Vukmirovich: Back When American Workers Put We Before I - Unions Have The Potential To Cut Across Social, Political And Racial Lines, Uniting Us Rather Than Dividing Us 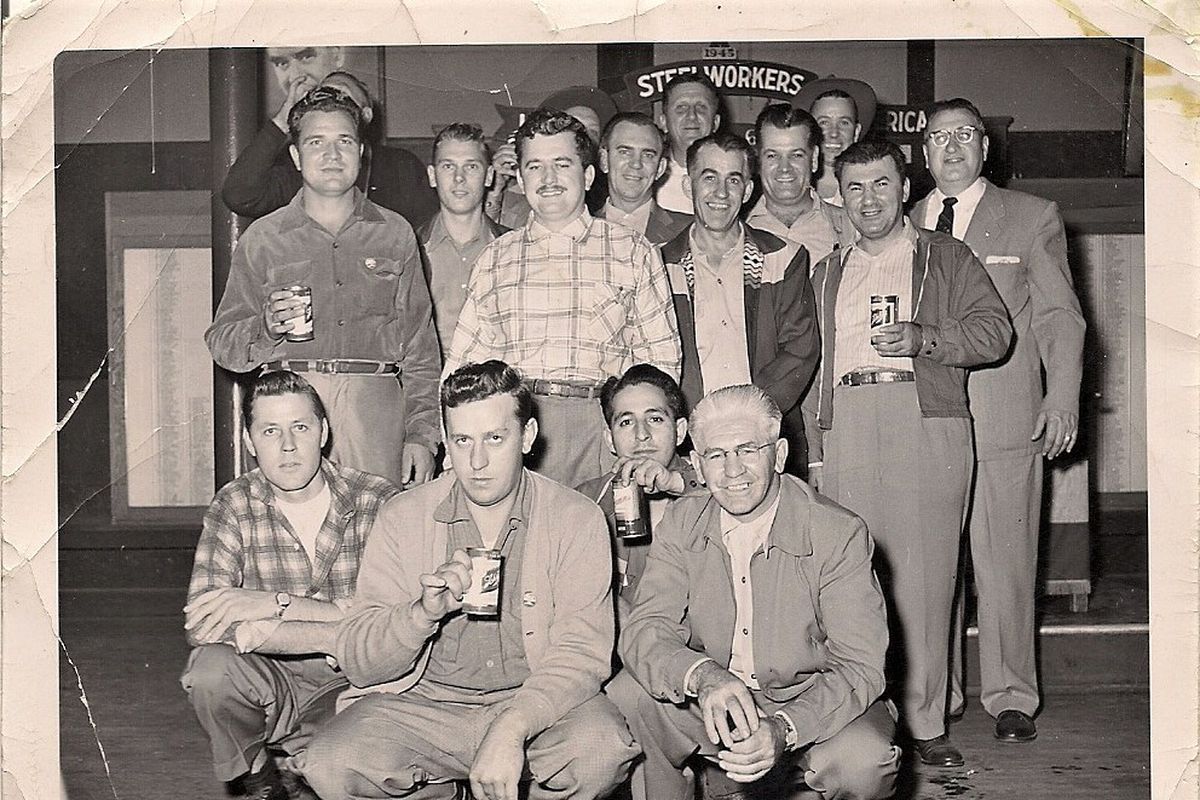 Chicago Sun Times Editor’s Note: John Vukmirovich is a Chicago-area Writer, Researcher and book reviewer.  The author’s late father, Ed Vukmirovich, is the man pictured above with the mustache in the middle.  In this photo from the late 1950s or early 1960s, He is surrounded by his Union Brothers from Republic Steel on Chicago’s Southeast Side.  (Photo provided by John Vukmirovich)

Look at their faces.

They are happy, capable and perhaps a bit cocky.

The man with the mustache is my late father, Ed, surrounded by his Union Brothers from Republic Steel on Chicago’s Southeast Side.

He worked at Republic for over 30 years and for many of them he was a respected Grievance Committeeman, defending the rights of his fellow Union Members.

The photograph, a family classic, was taken in the late 1950s or very early ‘60s.

The occasion was a Union Meeting for Local 1033 of the United Steelworkers of America (USW) and the place was some banquet hall, either in South Chicago or South Deering.

He remembered where, while I, unfortunately, have long forgotten.

When the photograph was taken, my father would have been in his late 30s, and his face, like those of his friends, exudes a smiling confidence.

But where did that confidence come from?

A combat-tested, Navy Veteran of World War II, as well as a youthful survivor of the Great Depression, he fought and labored and, at the moment the camera’s shutter clicked, was thriving, as was the Labor Movement in America.  Paychecks were full, homes and cars were bought and the hard years were fading into black and white.

If I had to pick a high point for Organized Labor in America during the 20th Century, I wouldn’t, ironically, turn first to the Steel Industry, but to the Auto Industry.

In 1950, the United Automobile Workers (UAW), headed by Walter Reuther, signed a Labor Contract with General Motors, a contract dubbed The Treaty of Detroit.

The positive results for the Workers (especially, and radical for its time, the Cost of Living Adjustment), reverberated through other industries, including steel.

All told, American Industry boomed and Unions thrived - and so did the American Economy.

When it comes to the state of Unions today, however, I don’t share my father’s confident smile.

Locally, there have been some clear skies.

As part of a global effort to Unionize IKEA facilities, Workers at the Joliet and Mokena locations recently voted to join the IAMAW - the International Association of Machinists and Aerospace Workers.

To Continue Reading This Labor Perspective, Go To: https://chicago.suntimes.com/2019/8/30/20833526/labor-day-unions-local-1033-united-steelworkers-south-deering-southeast-side-john-vukmirovich?fbclid=IwAR0Cs_atnWlgZRCK48DBL5bMvNCkXqA0bBY6axZ9cFg1IZKnXdBBg4bC6pg

Three's 'a whole lot of truth' in the comment referencing the 'we' versus the 'I' mentally of 'far too many' Union Members and their leadership. I'm 'very hopeful' the 'we' will return soon. Posted by Dan Boody on September 6, 2019 at 8:51 pm