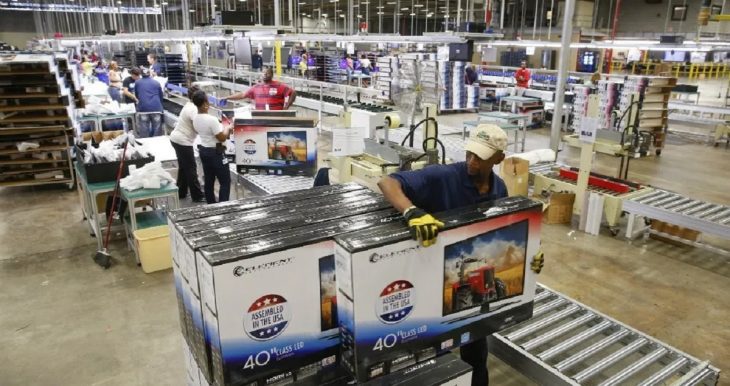 (WINNSBORO, SOUTH CAROLINA) - A South Carolina plant that assembles televisions, using Chinese parts, has announced it will shut down and lay off nearly all its Employees because of new tariffs imposed by the Trump Administration.

Element Electronics - which describes itself as the only assembler of televisions in the U.S. - plans to lay off 126 of its 134 permanent Full-Time Employees and close the Winnsboro plant on October 5th.

Notably, there are still at least two smaller companies that continue to assemble specialty televisions in the U.S.

“The layoff and closure is a result of the new tariffs that were recently and unexpectedly imposed on many goods imported from China, including the key television components used in our assembly operations in Winnsboro,” Carl Kennedy, Element’s Vice President of human resources, said in a letter to the South Carolina Department of Employment and Workforce.

Kennedy said he hopes the closure will be temporary and the company is advocating for its parts to be removed from the tariff list.

“We remain hopeful that the closure of our South Carolina factory will be avoided,” Element said in a statement shared on social media.

At the time, it was already true that there were no U.S. factories making televisions from scratch - just a few that assembled televisions using imported parts, but with the closure of Element’s plant, the United States will no longer assemble mass-market television sets anymore, either.

Trump has defended his escalating trade war with China as necessary to reduce the U.S. Trade Deficit and bring back American jobs, but U.S. companies have complained about rising business costs and Trade Experts have warned that tariffs could hurt the U.S. economy.

An analysis by the Right-leaning Tax Foundation last month predicted Trump’s Trade Policy could lead to the loss of nearly 365,000 jobs in the long run.

Meanwhile, James Smith, the Democratic Gubernatorial Nominee who is running against incumbent Republican South Carolina Governor Henry McMaster in November, said he spent time in Winnsboro discussing the loss of jobs “due to ‘job-killing’ tariffs.”

“These tariffs ‘are not helping anyone in our State who are hurting from the loss of these jobs and many to come,’” Smith said at a press conference, calling on McMaster to “tell this President ‘when he’s doing what’s wrong for the people of our State.’”

To Directly Access This Labor News Story, Go To: https://time.com/5361394/tv-factory-closing-trump-tariffs/