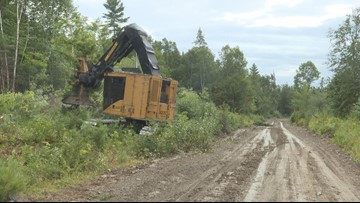 (BANGOR, MAINE) - Deep in the Maine woods, Cameron Jackson spends at least 15 hours a day alone in a tree-felling monster, cutting trees for Bangor-based Seven Islands Land Company.  Jackson, 25, has been a logger for 10 years.  He leaves home, and his girlfriend, on Sunday night, and heads about 90 minutes into a web of logging roads, nearly to the Allagash Wilderness Waterway.  He spends four days deep in the woods before returning home.

From his paycheck at the end of the week, he deducts the payment on his 2013 Tiger Cat, the maintenance costs - replacing the saw blade will cost $10,000 and soon he’ll need a new hydraulic pump - and pay payroll taxes and other fees.

“If you ‘do everything they want, you can make a really good living,’” he said of Seven Islands. “But ‘you’ve pretty much got to forget what you spend and keep working because you get too discouraged.’”

He’s one some 2,000 loggers in the State who work as Independent Contractors for large, private landowners who dictate every aspect of the logging industry.

It’s a hard job - made harder, loggers say, by the conditions like quotas and deadlines imposed by landowners such as JD Irving of Canada, the State's largest landowner.

The landowners have contracts and quotas to fill and deadlines to get wood to the mills.

For generations, Loggers in Northern Maine have worked as contractors at the behest of mills and large landowners.

Despite what they say are dismal - and often dangerous - working conditions, any effort to better their circumstances could mean being blackballed by a company.

But as of September 19th, that may change.

Under an exemption to Federal Anti-Trust Laws shepherded through the Legislature by Jackson's father, Senate President Troy Jackson, Loggers and Tree Haulers will be allowed to Unionize.

Troy Jackson, himself the fourth of five generations of Loggers, says the landowners have created a "Feudal" System that provides no benefits, keeps wages down and prevents the Loggers from even discussing with each other their contracts with the landowners.

"People in that industry ‘are working so incredibly hard for such little pay,’" Jackson said. "It's ‘nothing for a guy to work eighteen hours a day, (80-to-90) hours a week and at the end of the week have hardly anything to show for it.’"

Jackson said that in order to meet deadlines and fill quotas, "Some of these guys are forced to ‘overload’ on Maine highways.  ‘They're forced to drive faster than they know is safe.’  ‘And that's ... you know, the public should be upset with the way the landowners are pushing these people to try to make a living.’"

He said many Loggers have left the business because of the conditions and wages.

"The ‘money in the end is no joke,’" he said. "There's ‘no other State in the country that pays as little as they do here in Maine.’  ‘These guys are, unfortunately, going to have to be forced to pay people fair wages.’"

The International Association of Machinists and Aerospace Workers (IAMAW) - the same Union that represents Maine Potato Farmers and Lobstermen under similar exemptions - will lead this effort.

"It's ‘rare we've seen an imbalance of power this grotesque’ where the landowners ‘have all the power and the Workers have none,’" said Jay Wadleigh, a Business Representative for District 4 of the IAMAW.