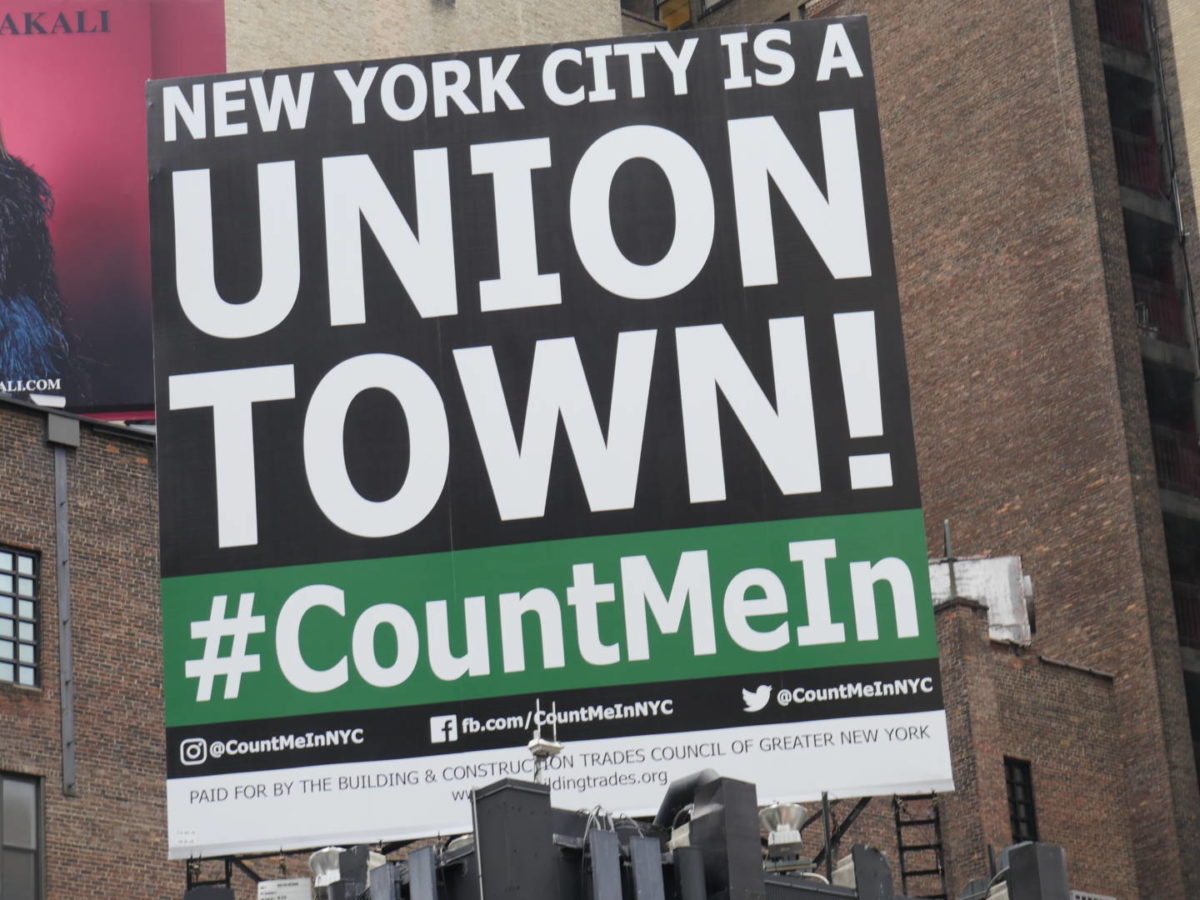 (NEW YORK CITY) - Union density in New York dipped slightly in the past year, but New York remains the most Unionized in the United States, with rates more than twice the national average of 10.5%, according to a just-released report by the City University of New York (CUNY) School of Labor & Urban Studies.

The report: The State of the Unions 2019: A Profile of Organized Labor in New York City, New York State, and the United States, found 21.4% of Workers in the City and 21.8% in the State were Union Members in 2018-19, according to data from U.S. Census Bureau Population Surveys.

In the Private Sector, 13.9% of Workers in the City and 13% in the State were Union Members, compared with a national average of 6.4%.

In the Public Sector, about two-thirds of Workers were Union Members.

In New York City, the only industries that added more than 100,000 jobs between 2008 and 2018 were Ambulatory Health Care Services and food services, restaurants, and bars.

Private Sector Workers’ average income actually declined by 1% during that period after being adjusted for inflation, while Public Sector incomes rose by 28%.

“What we see here is emblematic of a national trend.  The economy continues to grow, unemployment is at an all-time low, yet Workers’ wages lag behind, even as health care costs continue to skyrocket and inequality is rising,” report Co-Author Ruth Milkman, a CUNY Sociology Professor, said in a statement released by the School of Labor. “On average, more Union than Non-Union Workers earn a living wage, so it is no surprise that declining Private Sector Union Density has contributed to earnings erosion.”

In the City, the report said, the percentage of Union Members earning a Living Wage (about $30 an hour for a family of four) was 28% higher than it was for Non-Members.

The difference was most pronounced in the heavily Unionized sectors of construction, transportation, education, social assistance, and in leisure and hospitality - where 30.2% of Union Members made a living Wage, while only 12.6% of Non-Union Workers did.

But Non-Union Members did better in retail and wholesale trade, finance, and health care, where, the report conjectured, there are often high-salary Non-Union Professional Employees.

The Bronx and Brooklyn had the highest rates of Private Sector Unionization, at 24% and 23% respectively, likely due to health care and building services.

Service Employees International Union (SEIU) 1199, with some 190,000 Members, and Local SEIU 32BJ, with about 90,000, are by far the largest Unions representing Private Sector Workers in the City.

The largest numbers of Union Workers in the City are in health care and social assistance - 23.2% of Union Members, twice the national average - and education, at 21.1%.

Manufacturing, which accounts for 9.3% of Union Members nationally and 4.4% in the rest of New York State, includes less than 1% of Union Workers in the City.

To Continue Reading This Labor News Report, Go To: http://laborpress.org/nyc-still-a-union-town-but-young-workers-lag-behind/