Unions Are Making A âRemarkableâ Return 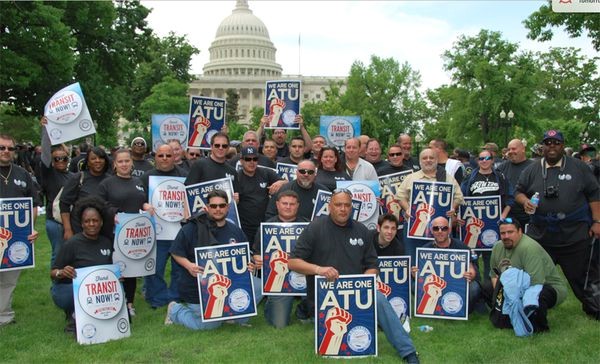 Once thought to be on their dying breath, Labor Unions in the United States are bouncing back, driven by immense public interest in combating Income Inequality and creating a better and fairer experience for current and future generations of Americans.

As the International President of the Amalgamated Transit Union (ATU) with over 200,000 Members, I know that American Workers are fed up and that they understand that our rigged economy advantages the ultra-rich and shortchanges Main Street.

The reaction to the 2018 Koch Brothers-spearheaded Janus decision from the U.S. Supreme Court – at one point said to be the death knell for Unions – has proven to be overblown.

Instead, our Union and 10 other major Unions actually gained a collective total of over 132,000 Members in just 2018.

The need for a more just economic reality has proven stronger than any action that corporate billionaires can take against the interests of the American People.

According to a 2018 MIT report, nearly 50% of Non-Union American Workers would join a Union - if given the chance.

While only 10.7% of American Workers belong to a union today, there is massive potential for the continued growth of the Union Movement - the 58 million American Workers interested in joining a Union would quadruple the number of current Union Members.

American Workers know that corporations have no interest in guaranteeing us a living wage and a pathway to the Middle Class.

Instead, the mega-wealthy continue to pad their own pockets.

This cannot be more apparent than when you look at compensation for the average Worker.

Just this month, the Economic Policy Institute (EPI) determined that over the past four decades, inflation-adjusted compensation for top CEOs increased a whopping 940%, vastly dwarfing the 11.9% growth the average Worker saw in their annual compensation over the same period.

Top earners – those in the top 0.1% of wage earners – similarly distanced themselves from the average American, seeing their annual earnings jump 339% since 1978.

But these same billionaires who have tried to stifle Unions through their greed and ruthless ambition have instead set the stage for the revitalization of the Union Movement.

The growing class of those interested in Unionization includes both the conventional - you’ve seen blue-Collar Coal Miners fighting for their pay in Kentucky’s historic Harlan County - as well as the new, as droves of recent College Graduates, Working Mothers and Seniors trying to scrape together enough for retirement seek routes to financial security.

Our movement is gaining momentum across the country.

Just last month, after a month-long Strike, VTA bus drivers in Martha’s Vineyard won a Union Contract through the ATU for the first time since their employer took over in 2003, securing higher wages and better treatment for the hard work they do to keep the island moving.

And this April, after an 11-day walk-out that drew support from numerous Presidential candidates - including Joe Biden, Bernie Sanders, and Elizabeth Warren, 31,000 Stop & Shop Workers and Members of the United Food and Commercial Workers International (UFCW) Union won the increased pay and health benefits they deserve.

In 2018, more Workers participated in major work stoppages than any year since 1986.

Over 485,200 Workers across the country took action to ensure the people our country depends upon each and every day were not shortchanged and deprived of fair wages, affordable health care or their pensions.

This was led by our Nation’s Educators, 373,000 of whom stepped up to show their students what it means to fight for what is right.

American Workers have even been inspired to bring the Union Movement to areas where Unionization had not previously been successful.

We have seen Workers form Unions in newsrooms across the country, including The Los Angeles Times, Vox Media, and The Chicago Tribune.

Training centers like ATU’s Tommy Douglas Center - which has prepared more than 10,000 Workers from across the United States and Canada to lead organizing, negotiating and mobilization efforts for their respective workforces - continue to develop the next generation of Union Advocates and Organizers as we fight for a more just and fair system that rewards every American for their hard work.

It is incumbent upon those of us already in Unions to continue feeding this momentum.

We must create an environment that enables our Brothers and Sisters from across the country to join the Union Movement and to fight for a better life for themselves and their families.

To Directly Access This Labor News Report, Go To: www.nj.com/opinion/2019/09/unions-are-making-a-remarkable-return.html?fbclid=IwAR0hbl4TLUX1ZKyNkA6hwwNLSxS14TDgdPn-EBlmd7FLQaOJM1b5xZ25VcA