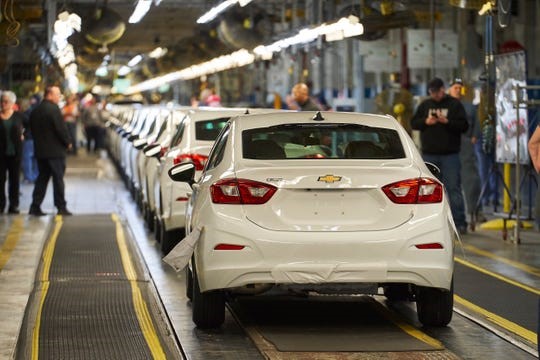 (DETROIT, MICHIGAN) - The United Auto Workers (UAW) has confirmed it will seek to negotiate a contract with General Motors (GM) this Fall as a template for negotiations with Detroit's two other automakers.

It was thought the Union would choose Ford, a company perceived to be Worker friendly, so the news is a surprise to some Union Members and Industry Observers.

Factory Workers have said for months they feel angry and mistreated by GM.

“Mary Barra said from the outset of these talks that we will stand up as we tackle a changing industry.  We are ready to stand strong for our future,” UAW President Gary Jones said in a prepared statement released Tuesday (September 2bd). “We are focused.  We are prepared and we are all ready to stand up for our Members, our communities and our manufacturing future.”

The UAW, which represents nearly 150,000 Hourly Workers at Ford, General Motors and Fiat Chrysler Automobiles (FCA), also said Workers at each local of all three companies have voted to authorize a Strike: 95.98% at Ford, 96.4% at GM and 96% at FCA.

The Strike Authorization is procedural and routine, part of the bargaining process that happens every four years when a new National Contract is being negotiated.

"The vote does not mean there will or will not be a Strike.  It gives authority to the UAW International President and International Executive Board to call for a Strike," the UAW said.

“No one goes into collective bargaining taking a strike lightly.  But it is a key tool in the tool-belt as our Bargaining Team sits across from the company,” Jones said in a prepared statement. “Ultimately, the company holds that destiny in their hands as they bargain.  Clearly the UAW stood up for them in a very dark time, now that they are profitable, it is time for them to stand up for all of us.”

The current UAW contract with the Detroit Three was hammered out in 2015 without a Strike at GM, Ford or FCA.

But FCA Workers are angry that the company has been profitable after they sacrificed during the Great Recession and Chrysler's 2009 bankruptcy.

To Read This Labor News Story In Its Entirety, Go To: https://www.freep.com/story/money/cars/general-motors/2019/09/03/uaw-strike-gm/2086091001/?fbclid=IwAR0a0JSBVrBeLdvpzTx5JBaWTPC8hnDXglKDlFkqZ3vFIDXXa2PA5mnOgM0