Instead Of âRecognizingâ Workers Across The Country For The Role They Play, Trump âGoes Afterâ National AFL-CIO President Trumka In A Tweet - âOn Labor Dayâ 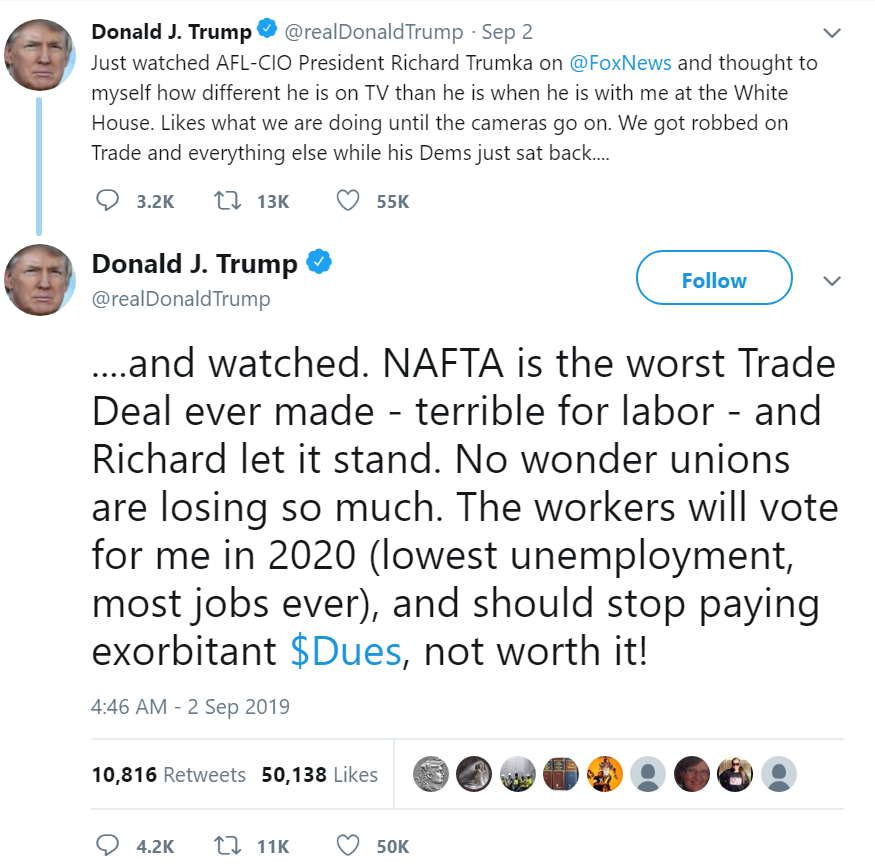 Trump, in a Labor Day morning tweet, claimed Trumka doesn't share the same critique of Trump's trade deal when "he is with me at the White House."

"Just watched AFL-CIO President Richard Trumka on @FoxNews and thought to myself how different he is on TV than he is when he is with me at the White House.  Likes what we are doing until the cameras go on," Trump tweeted.

Trump targeted Trumka after the National AFL-CIO President said Unions were not ready to back his "unenforceable" replacement for the North American Free Trade Agreement (NAFTA).

"We got robbed on Trade and everything else while his Dems just sat back and watched.  NAFTA is the worst Trade Deal ever made - terrible for Labor - and Richard let it stand.  No wonder Unions are losing so much.  The Workers will vote for me in 2020 (lowest unemployment, most jobs ever), and should stop paying exorbitant $Dues, not worth it!"

"An unenforceable trade deal is a windfall for corporations and a disaster for Workers," Trumka said Sunday (September 1st) of the proposed United States–Mexico–Canada Agreement.

He also criticized Trump's handling of China, saying that taking on the Nation "has to be a multilateral approach.  One country can’t take on China."

The White House and Trump have pushed back on claims that the tariffs on Chinese goods will hurt consumers or farmers, arguing that it will impact only China.

In a response to Trump's tweets, National AFL-CIO spokesperson John Weber said the Labor Group wouldn't back down to Trump.

"We’ve been clear on what working people want, in private and in public.  It’s our job to tell the President what he needs to hear - not what he wants to hear," Weber said in a statement.

Trumka and Trump have feuded in the past.

Trumka has criticized NAFTA, but has repeatedly said Trump’s replacement USMCA deal is worse and that Unions are united against supporting it.

Trumka recently led his own delegation to Mexico to discuss the deal.

Trump has said that Trumka is a reason why Unions are performing "poorly."

To Directly Access This Labor News Story, Go To: https://thehill.com/homenews/administration/459610-trump-lashes-out-at-afl-cio-chief-trumka-no-wonder-unions-are-losing?fbclid=IwAR0D-T3Kzpx56gehjaPSnLnzGCBusN3rrhNRO7DaSPG6IVHkHSTAIPWfato