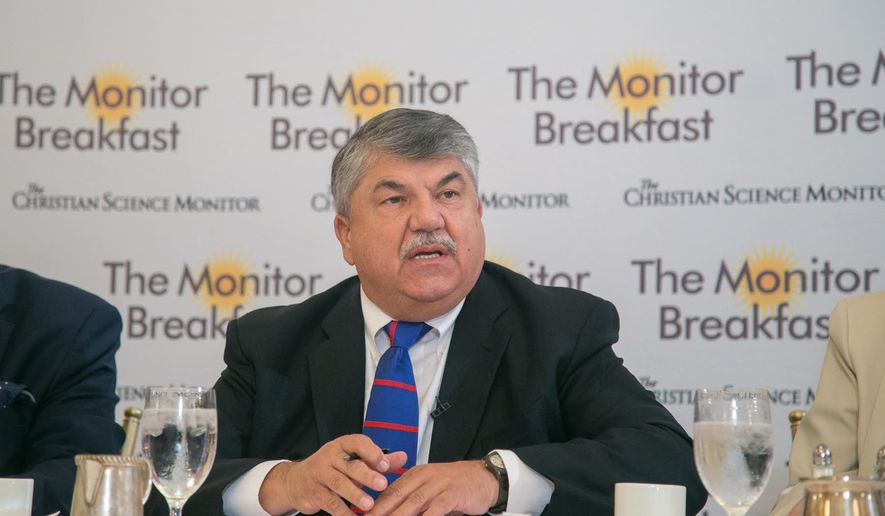 (WASHINGTON, D.C.) – National AFL-CIO President Richard Trumka insists Union Members were not responsible for electing Republican President Donald Trump in 2016, but he is vowing they will help defeat him in 2020.

During a breakfast held last week with Washington reporters that hosted by The Christian Science Monitor, Trumka promised an unprecedented mobilization of Union Workers in 2020, noting Union Membership and Pro-Union sentiment in the country has grown substantially since Trump took office: “We are ‘faced with the reality of historic inequality and historic bigotry that goes all the way to the top.’”

The National AFL-CIO President blamed Democratic nominee Hillary Clinton’s startling loss in 2016 on her failure to turn out voters, not on Union Voters crossing party lines to elect Trump, whose support from Blue-Collar Workers helped him put Rust Belt states in the GOP column for the first time in a generation.

However, Trumka said Union Members were not the deciding factor: (Clinton) had a twenty-percent labor margin in Pennsylvania.”

He added the low turnout among Black Voters for Clinton in the state made the difference.

Still, Trumka said the Labor Movement had redoubled its efforts since then.

He described the massive effort by Union Leadership to better connect with their Members and better respond to their concerns.

However, Trump continues to boast that Union Members are on his side, even if the Union Leadership opposes him.

Trumka, whose organization is the largest Federation of Labor Unions in the U.S., refused to rank the field of Democratic Presidential Candidates.  He said they all had learned a lesson from 2016 and were more pointedly addressing Workers’ issues: “I think the lesson these Democrats learned is that ‘unless you talk about the economic issues that affect Working People, you are not going to get elected.’”

Labor Unions have been slow to endorse a Presidential Candidate in 2020 after criticism that they too quickly got behind Clinton the last time around.

Trumka said decisions about endorsements would come from the Membership or from the ground up - and he said the candidates are being closely scrutinized this time.

The Labor Movement “sets the bar higher than ever in the 2020 Presidential Election,” he said.

The National Labor Leader said it would be easy to convince Union Members that Trump is not on their side.  He held up a six-page list of Trump Administration actions he said harmed Workers, including weakening oversight of pension plans and defending laws that make it more difficult to Unionize workplaces.

“When he opposed every increase to the minimum wage, you have to ask, ‘Does he really care about Workers?,’” Trumka said.

To Read This Labor News Story In Its Entirety, Go To: www.washingtontimes.com/news/2019/aug/29/richard-trumka-union-members-will-help-oust-trump/?fbclid=IwAR33m9CnmyH4WjB1cotTnwujliATNp2EkVDLDTpVSalTe7Wul76SE2pVF-I