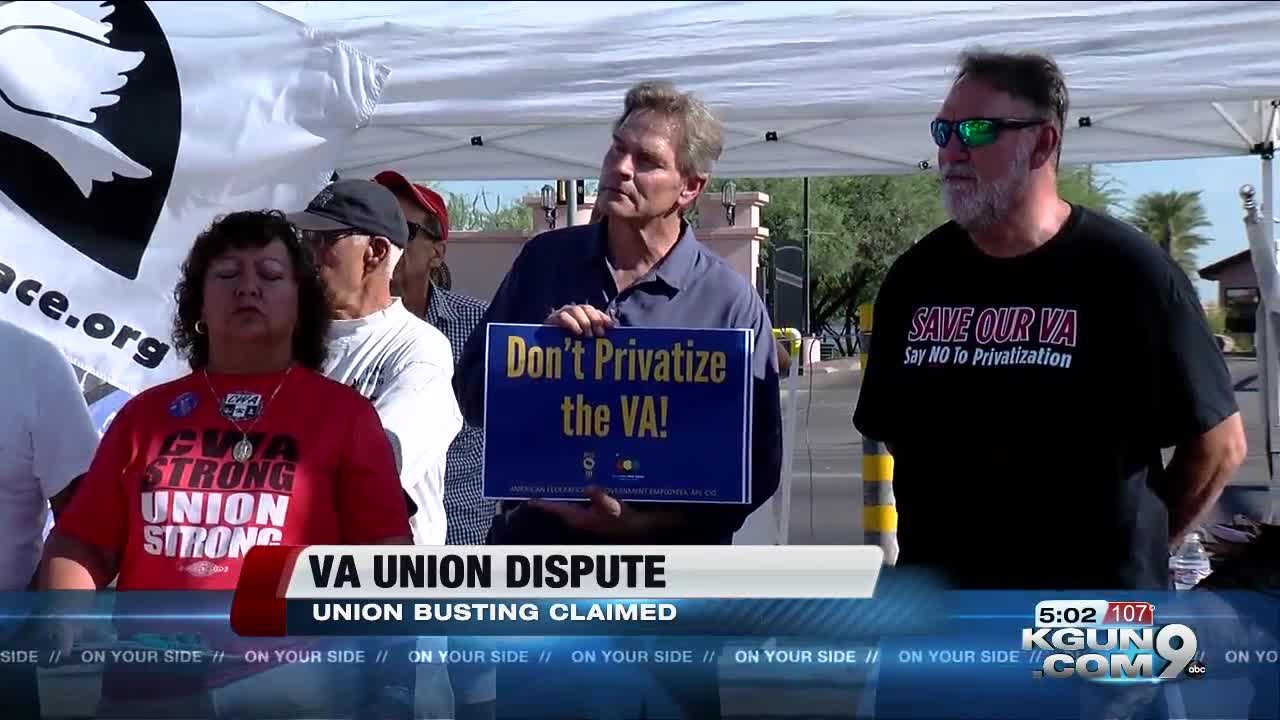 (TUCSON, ARIZONA) - There's a battle brewing for Military Veterans and some of the Union Workers who deliver their health care.  They say the Federal Government is undermining the Veterans Administration (VA) Health Care System.

Some Vets and Health Care Workers say the Federal Government is hurting the health of the VA itself by trying to carve Unions out of wage and workplace negotiations and turning VA Health Services over to private doctors and hospitals.

There have been moves to let Veterans use private health care if there's a long wait at the VA or if they live a long way from VA facilities, but critics say that has been cover for a break-up plan.

Henry Trejo of the Alliance for Retired Americans doesn't want to lose the doctor who cared for him for 11 years: "My doctor has immediate access to my records and she knows all about me and it's easy to go there and be treated by her.  Now in the private sector, we don't know what kind of treatment we're going to get."

U.S. Congressman Raul Grijalva says if the Trump Administration cuts the bargaining power of Unions there's no organized voice to speak up for Workers and Veterans.

In statements, the VA denies it's trying to break up or privatize the system.

It says it's trying to renegotiate its Union Contracts "to improve medical care, customer service, and Staff accountability while maximizing value for Veterans and taxpayers."

Ron Barber is a former Congressman who now severs as the District Director for Congresswoman Ann Kirkpatrick.  He says Kirkpatrick's sponsoring legislation that forbids the government from carving Unions out of VA workplace negotiations.  He thinks it'll pass the House, but it then has to pass through the GOP Majority Senate and Republican President Donald.

KGUN9 reporter Craig Smith asked: “Even if it clears both houses would it be in danger of a veto you think?”

Barber responded: “Well possibly but it is inside a much larger budget, the appropriations bill for various agencies.  It's not just stand-alone.  So the President cannot veto a piece of that.  He has to veto the whole thing which would be unlikely because some of that funding has to do with the White House operations."

To Directly Access This Labor News Report, Go To: www.kgun9.com/news/local-news/vets-and-unions-say-administration-undermining-the-va?link_id=4&can_id=2cd60f1652a4869efb2d1b9c435fc56f&source=email-alliance-mentions-and-press-clips-august-22-2019&email_referrer=email_601728&email_subject=alliance-mentions-and-press-clips-august-22-2019&fbclid=IwAR0M6abWUHXQ7xh1Iz7lqWah5m2epxjnq5VDngqIPld8tUf8RyoeY2HZtew