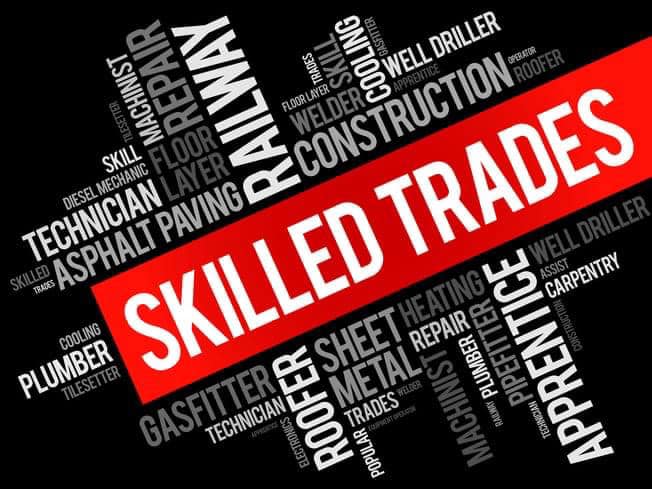 Labor, the U.S. Economy had 7.6 million unfilled jobs, but only 6.5 million people were looking for work as of January 2019 and it is more apparent than ever that our country is suffering because of it.

Take our infrastructure for instance.

Roads, highways, bridges, locks, dams, harbors, water systems and airports have been neglected or only marginally repaired in the last 20 years.

Each year the cost to fix or replace the crumbling systems soars, with estimates now in the multi-trillions of dollars - and that’s just to fix what’s already there and falling apart.

Republican President Donald Trump has called for at least $1.5 trillion for infrastructure construction (even though he has yet to move on it during the time he has spent in the Oval Office), fueled with government spending - including public private partnerships and cutting red tape.

If this does get this done, the impact on skilled labor jobs will be massive.

Aside from federal infrastructure spending, projected job growth in many Building Trades continues to be positive.

The Bureau of Labor Statistics (BLS) projects better than average employment in the Building Trades at least through 2026.

The only problem is, there simply may not be enough Workers to employ.

This issue is partly due to our culture’s emphasis on going to college.

Many high schools look to their university placement as the best judge of a quality education.

That statistic discriminates against students for whom college is just not a good fit, especially when schools do little to inform students of non-collegiate options.

It is unfortunate for those students who try college, but eventually drop out, feeling like a failure, when in fact, it wasn’t the right place for them from the start.

Recognizing high tuition costs, long-term student loan debt, and difficulties finding a job in the field of their college major should be motivating young men and women to look at better paying alternatives from the onset.

Many are already skilled at working with their hands and prefer jobs where they can move around rather than sitting at a desk all day.

High School Career Counselors would be doing students a big favor by informing them about the benefits of getting into Technical Trades.

Parents who best understand their son or daughter’s interests may also do well to encourage career options aside from immediately attending college.

It’s time we reduce the stigma around technical training.

Skilled labor is not a fallback position, but a genuine positive career choice.

To Continue Reading This Labor News Story, Go To: https://www.forbes.com/sites/sarahchamberlain/2019/08/21/addressing-the-skilled-labor-shortage-in-america/#244a49e0181d