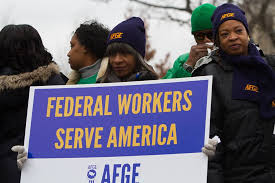 (WASHINGTON, D.C.) – The U.S. Department of Agriculture has slashed the amount of separation payments it promised to make to Employees who are being forced to quit their jobs as the department relocates two agencies from Washington, D.C. to the Kansas City region.

Employees at the Economic Research Service (ERS) and National Institute of Food and Agriculture (NIFA) were counting on the one-time buyouts of $25,000 to ease the loss of income incurred by the forced separations.  Now the agency has announced that because so many people are refusing to relocate 1,000 miles from home, it is slashing the promised payments to $10,000 per Employee - a 60% cut.

“It is ‘hard to imagine’ USDA management ‘finding more ways to demoralize’ the Workers at these two agencies, ‘yet they continue to top themselves at every turn,’” American Federation of Government Employees (AFGE) National President J. David Cox Sr. said.

“It’s ‘no secret’ Employees are ‘extremely upset’ by USDA’s decision to relocate these two agencies half-way across the country.  Two-thirds of Employees ‘rejected’ the agency’s orders to move by (September 30th), so USDA ‘should have planned better for that reality and budgeted accordingly.’  Employees ‘now have less than a week to decide whether to accept the reduced buyout, which also bars them for working at another federal agency for five years.’  Many of these Employees ‘have spent their careers devoted to agricultural research and furthering their agencies’ missions, and they deserve to be treated better than this.’”

The AFGE is the largest Federal Employee Union, representing 700,000 Workers in the Federal Government and the Government of the District of Columbia.

To Directly Access This Labor News Story, Go To: www.afge.org/publication/usda-employee-union-blasts-agency-for-slashing-separation-payments-for-workers-forced-to-quit/?fbclid=IwAR1xqbpg_5wDMEBknWwBvpeRGNRBzEtE-i9pNjTqsglakeoqAKVJo-Zap9M