More Than 20,000 AT&T Workers In The Southeast Go Out On Strike After Charging The Telecommunications Giant With Not Bargaining A New Contract In Good Faith 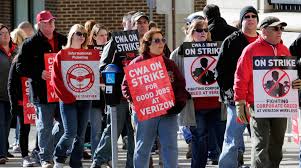 In a surprise move, more than 20,000 Union-represented AT&T Workers in the Southeast went out on strike as of midnight Friday (August 23rd).  Members of the Communication Workers of America (CWA) charged the huge Telecommunications Company with Unfair Labor Practices (ULPs) during negotiations aimed at securing a new contract.

The previous agreement expired on August 3rd, but since then, talks have gone nowhere because the company has made sure that an agreement cannot happen said Richard Honeycutt, the CWA’s Vice President for the Southeast in a statement that was issued late Friday.

“Our talks have stalled because it has become clear that AT&T has not sent negotiators who have the power to make decisions so we can move forward toward a new contract,” Honeycutt said.

The company, which is based in Dallas, has annual revenue of about $170 billion a year.  It includes the remnants of Atlanta-based BellSouth, which for more than two decades was the largest of the seven regional phone companies.

Company officials - who said they were blindsided and mystified by the Strike call, were adamant about being prepared for a walk-out.   In the days before the contract expired, AT&T officials said they would be prepared for a Strike and that business operations would go on smoothly with managers, executives and contractors picking up the slack.

Union Leaders scoffed at the notion, arguing AT&T will have to prioritize work - delaying new installations and non-emergency maintenance.

The Union said it has filed an Unfair Labor Practice (ULP) Charge with the National Labor Relations Board (NLRB), arguing that the company has not bargained in good faith.

To Read This Labor News Story In Its Entirety, Go To: www.ajc.com/business/workers-strike-the-southeast-more-than-000-walk-out/wNwYJfXjLwOLuRg0148BuM/?fbclid=IwAR0b2Y2hb4z7p98cHUj2Tehbgr1cfLxKU7MdYRaH7p4qsg-UVMRXXn-NATE