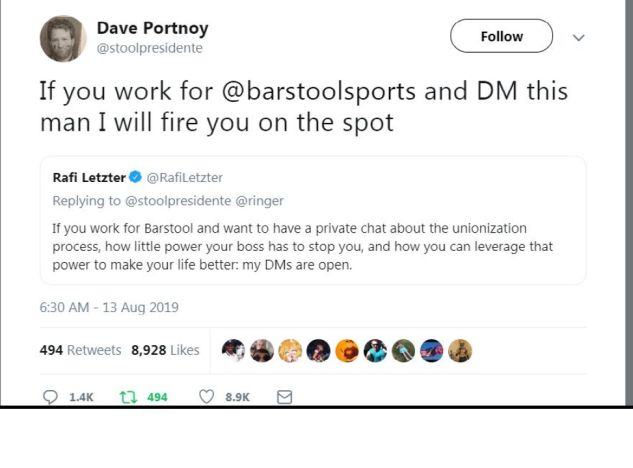 A loud-tweeting CEO is under investigation after going ballistic when talk of Union came to his company.

The Washington Post reports: “David Rosenfeld, a Labor Lawyer and self-styled ‘paid troublemaker,’ saw the tweets as good old-fashioned Union Busting.  He went to work.  His mission: extract an apology from the man who had threatened to fire “on the spot” any Employee who so much as discussed Unionizing at his company.

But Rosenfeld’s opponent, Dave Portnoy, the architect and provocateur in chief of the polemical and fratty Media Company Barstool Sports, was aggressively unapologetic.

Rosenfeld is hoping the National Labor Relations Board (NLRB), which is now investigating charges against Portnoy and Barstool, will change that.

On Tuesday, Portnoy posted his threat to Twitter, responding to a man offering assistance to Barstool Employees who may be considering organizing.

‘If you work for @barstoolsports and DM this man I will fire you on the spot,’ Portnoy wrote.

Portnoy was unfazed - gleefully defiant, even.

Responding on Twitter to a user who wrote: ‘I hope they Unionize,’ Portnoy said, ‘Me too.  Just so I can crush it and reassert my dominance.’

The next day, Rosenfeld, a veteran attorney who has argued in front of the U.S. Supreme Court, filed a grievance with the NLRB, an independent Federal Agency charged with safeguarding the right to organize as Unions.

The charges triggered an investigation that will require Barstool to respond to Rosenfeld’s complaint and could force Portnoy to delete his tweet, apologize for it and assure his Employees that he won’t punish them for unionizing.

For the rest of the story, visit The Washington Post here.

To Directly Access This Labor News Story, Go To: http://labor411.org/411-blog/nlrb-investigating-ceo-who-tweeted-i-will-fire-you-on-the-spot-to-employees-if-they-tried-to-unionize/?fbclid=IwAR05dnVIR_xt8L6oCn-w-JxT6rvHkJR-qqd3guEnGp_bgu553R_rWfI0yss