However, Theres No Resolution When It Comes To The Firings By Management Of Three SPoT Coffee Workers Involved In The Unionization Effort - As Such, The Previously-Announced & Called-For Consumer Boycott Continues 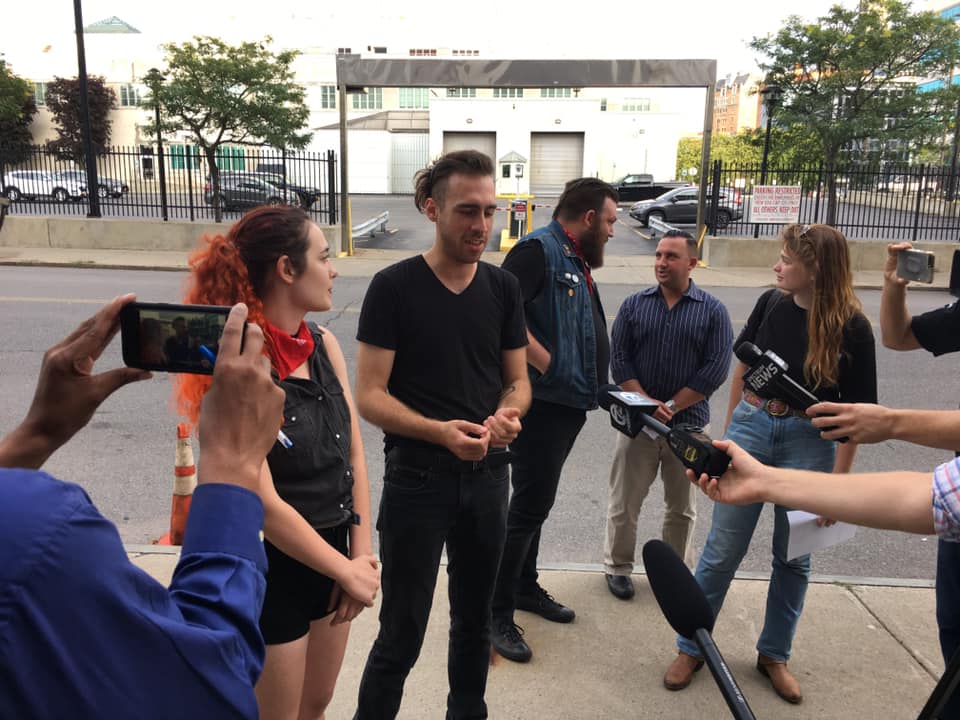 (BUFFALO, NEW YORK) – It was two days before the Fourth of July that Workers employed by the SPoT Coffee Chain in Buffalo first went public with their desire to form a Union in their workplace.  Now, just a little more than a month and half later - on Tuesday (August 20th), those Workers hugged in celebration after their overwhelming vote to Go Union was announced.

By a final tally of 43-to-6, the SPoT (Supporting People Organizing Together) Coffee Workers - representing a total of 90 employed at four local locations, on Hertel, Delaware and Elmwood Avenues and on Main Street in Suburban Williamsville, have formed the first Union at a coffee shop in Buffalo in more than 25 years.  A majority of SPoT Coffee Workers signed cards to force the Union Election that was overseen by the National Labor Relations Board (NLRB).

However, the Union working with the SPoT Employees - Workers United - has asked the local Labor Community and the general public to continue to support the previously called-for consumer boycott of SPoT Coffee’s local outlets until three SPoT Coffee Workers who were allegedly terminated for their Union activities are rehired.

“We ‘still must get (them) reinstated.’  Therefore, the boycott against Spot Coffee ‘must continue.’  Our ‘ultimate goal is to obtain an initial’ Collective Bargaining Agreement with SPoT Management.  We ask for the public’s ‘continued vigilance and support,’” Workers United for Upstate New York Manager Gary Bonadonna, Jr. said.

After the NLRB’s Regional Office in Downtown Buffalo announced the final result late Tuesday (August 21st), a small number of SPoT Coffee Workers and representatives of Workers United deservedly grinned ear-to-ear as they spoke to the gathered media about their amazing organizing victory that took place in just several short weeks (Pictured Above/WNYLaborToday.com Photo/Pictured Below, Courtesy of Workers United). 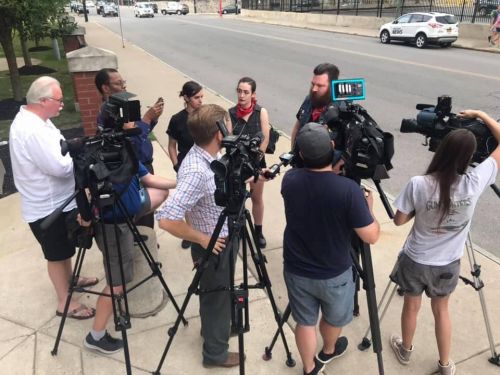 “It’s ‘pretty exciting,’” SPoT Coffee Worker Byrne Kolega said of the final vote.  “We were ‘hopeful - pretty confident, but we didn’t expect such a (large) margin.’  ‘It says a lot about who were are.’  ‘Buffalo is a Union Town.’”

Philip Kneitinger, another SPoT Coffee Employee, said: “We ‘don’t want to be smug, but we expected this.’  ‘This is not an outcome, it’s something good.’” 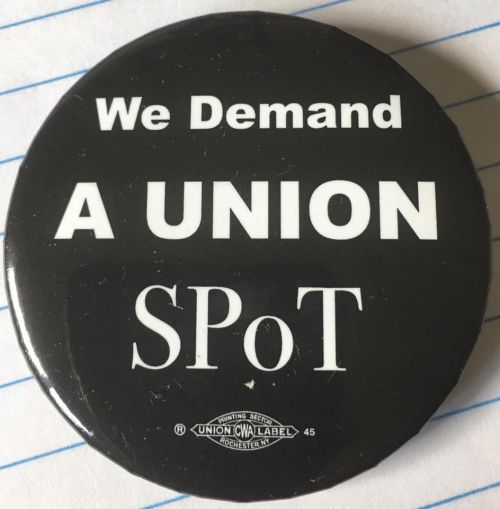 In Rochester, there was only one No vote cast in the Rochester SPoT Coffee Unionization Drive that has now created 16 new Union Workers employed at SPoT Coffee’s East Avenue location, Bonadonna said.

“I am ‘so proud’ of these kids,” Bonadonna told WNYLaborToday.com.  “In the ‘face of three firings and workplace intimidation, they stayed strong, rose up and formed their Union.’  This is a ‘major step forward’ for Restaurant Workers in Buffalo.”

“This vote ‘marks an important and necessary milestone in building Worker Power in an underrepresented’ industry,” Workers United Lead Organizer Jaz Brisack, who posted a selfie of himself and the SPoT Workers on Facebook (pictured below), said.  “Service Workers ‘are a critical cornerstone’ of the economy and Workers ‘should not have to choose between dignity on the job and a paycheck that doesn't even cover the necessities of life.’” 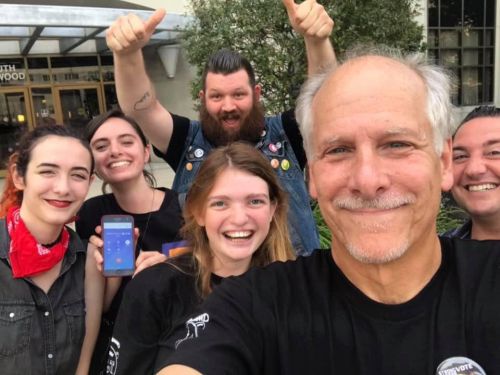 Asked what his gut impression was before the vote was tallied, Bonadonna told Your On-Line Labor Newspaper: “I was ‘confident’ (the vote would be positive), ‘but you never know what the turnout will be.’  (The SPoT Coffee Workers) ‘ran a very solid (Unionizing) campaign.’”

The Western New York AFL-CIO Area Labor Federation (WNYALF) - whose affiliated Unions and their Representatives turned out big for the SPoT Coffee Workers at their demonstrations and rallies, posted the following congratulatory message on the WNYALF’s Facebook Page: Represented by Workers United, the SPoT Coffee Workers voted in a NLRB Certification Election and emerged with an overwhelming 43-6 victory.  This is an excellent victory for the SPoT Coffee workers, one that is shared with Western New York Labor Community.  We will continue to support their efforts and negotiate their first Collective Bargaining Agreement and want to reinstate the three terminated Workers

Prior to the vote, WNYALF President Richard Lipsitz said: “The Western New York Area Labor Federation is ‘very excited.’  We think ‘it will make a big difference in the lives of SPoT Coffee Workers and we look forward to their victory.’”

Asked about the support the SPoT Coffee Workers received from the local Labor Community and the general public when the boycott was asked for, SPoT Coffee Employee Katie Coward said after the vote was announced: “They were ‘very helpful, very supportive’ - just them ‘not being there’ (to make a purchase at SPoT’s local outlets).  ‘We had people come into the stores and tip (the Workers) without buying anything.’”

Now that the Union Election is over, WNYLaborToday.com asked when Workers United would reach out to SPoT Coffee Management to start the negotiating process. Bonadonna replied: “If not tomorrow (Wednesday, August 21st), then the following day (Thursday).  ‘It will be their first contract and it won’t be easy, but we’re hopeful it will be a good outcome.’”

Negotiations will cover issues such as wage increases, benefits and workplace policies. 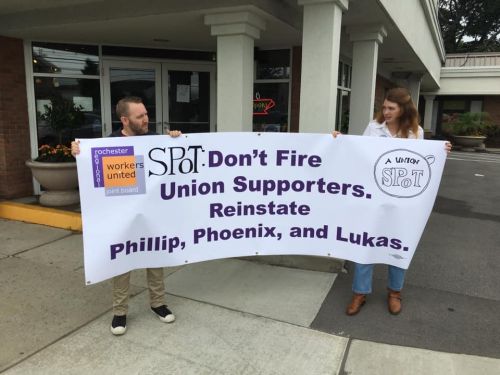 Workers United is also awaiting a decision from the NLRB in regards to the three terminated SPoT Coffee Workers who were Members of the SPoT Workers Organizing Committee.

Workers Untied has called for the rehiring of the two fired Workers and a manager who refused to give the company their names - with back pay; A public apology to its entire workforce from SPoT Coffee Management; Admitting publicly to their Anti-Union activity and pledging “not to do it again;” and Agreeing to abide by a set of ethical guidelines for Union Organizing.